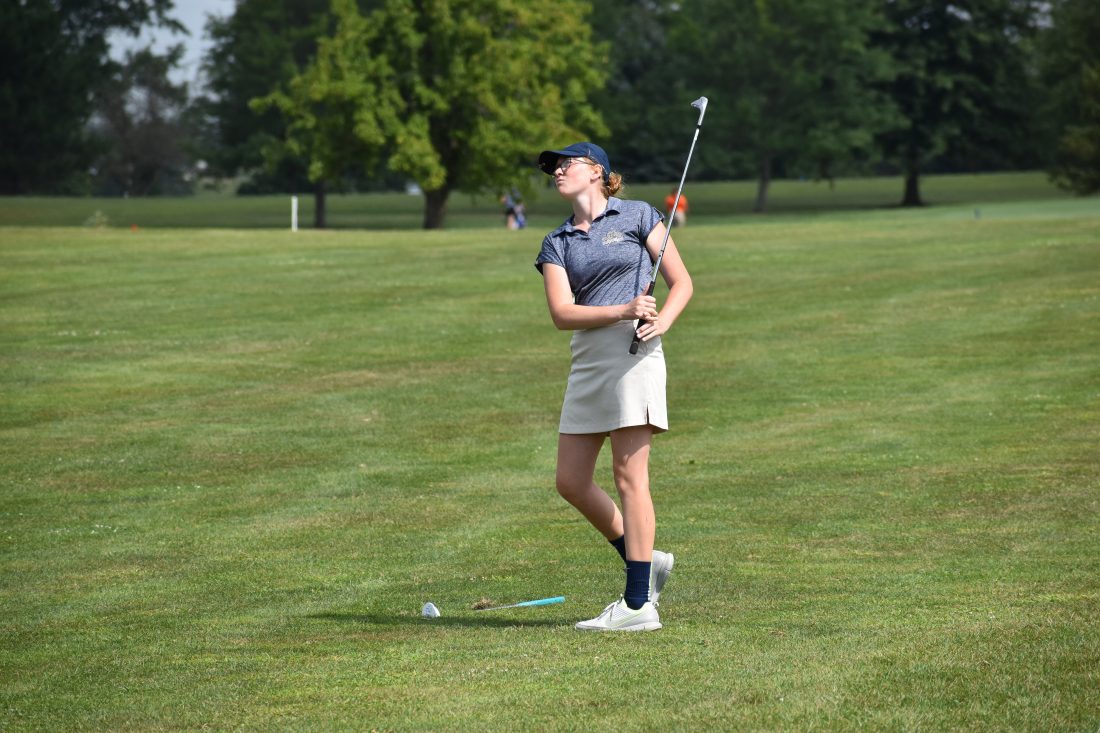 PHOTO BY ZACH BAKER Columbian’s Meredith Obringer hits out of the fairway Friday at Seneca Hills in the Columbian Invitational.

Ashland completely ran away with the Columbian Invitational Friday at Seneca Hills, shooting a 308, which was 55 strokes better than Shelby.

Brooke Newsome led the way for Clyde with a 92, while Margaret Hilliker added a 98, Grace Pocock shot a 101 and Kennedy Brown ended with a 110. Zoey Fairbanks carded a 114 and Felicity Hahl finished with a 132.

For the Lady Red JV, Tea Layne shot a 98. It also got a 102 from Aubrey Michaels, a 107 from Jillian Sumser and 110s from Alli Michaels and Kendall Collins. Nadea Strause shot a 111.

Ashland’s Anna Watson medaled with a 71.

Jake Forehand and the rest of his Seneca East teammates continued their hot play this season with a 150-178 Northern 10 Athletic Conference victory over Buckeye Central Friday at Clinton Heights.

Forehand fired a 36 for the Tigers, while Andy Bauman and Turner Bridgford shot twin 37s and Andrew Kalb rounded out the scoring with a 40. Jon Margraf (45) and Nolan Jones (49) also played.

Kaiden Vaughn’s 41 led BC (2-1). It also received 45s from Logan Niese and Tyler Rose and a 47 by Jarod Mason. Alex Kanney and Justin Dentinger both shot a 49.

CLYDE — Adam Hosang registered a 38 for Bellevue in a 175-193 win over Clyde in Sandusky Bay Conference Lake Division play at Sleepy Hollow.

Max Yates had a 45 for the Fliers, while Jacob Lee finished with a 47.