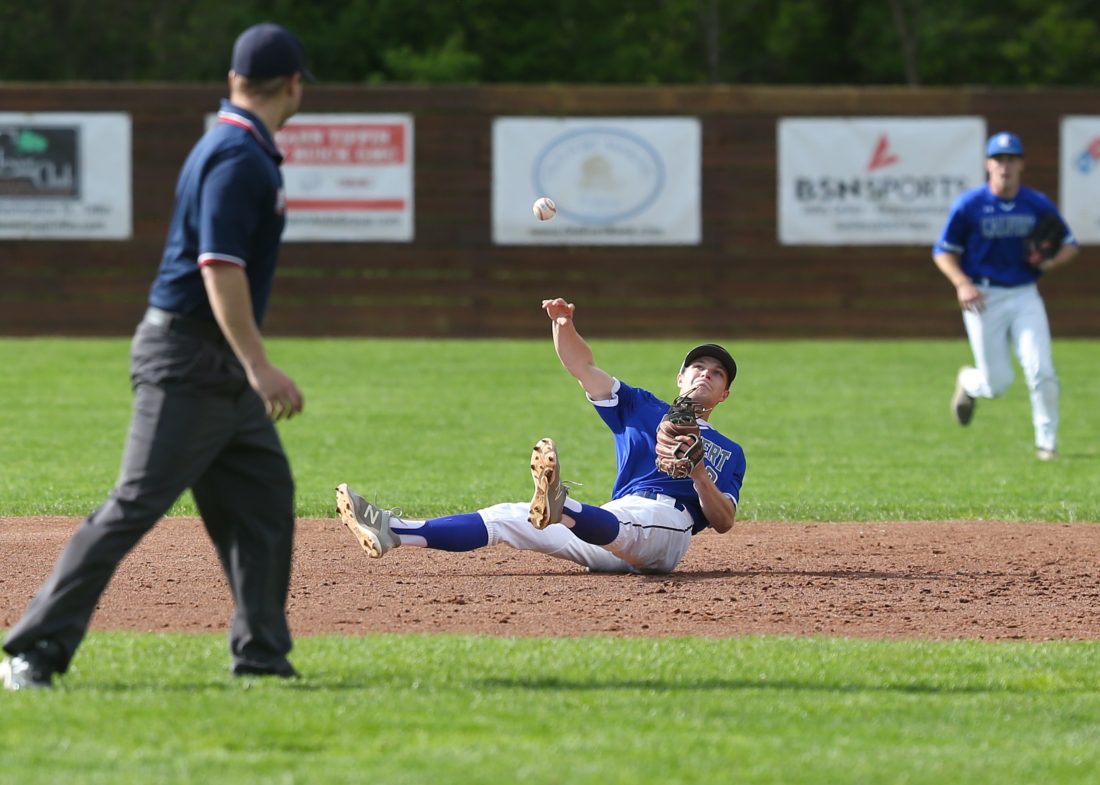 PHOTO BY STEVE WILLIAMS Calvert shortstop Ethan Vera dives to the ground and makes a spectacular throw to first to get the out Tuesday in a Division IV district opener against Ridgemont at Peaceful Valley in Tiffin.

Ridgemont scored two runs in the top of the first and led 2-0 through five innings in a Division IV district opener against Calvert Tuesday.

Things didn’t look good for the Senecas until they plated three runs in the bottom of the sixth and held Ridgemont at bay in the seventh to grab a 3-2 victory.

The Senecas advance to a district quarterfinal at Colonel Crawford Thursday st 5 p.m.

Nolan Wuescher was dealing on the mound for the Senecas, giving up two unearned runs on just two hits in a complete game. He fanned nine and walked three in the win.

At the plate, Josh Gase doubled, singled and drove in a run for the Senecas, while Hunter Yeakle, Ethan Vera and Leo Longo all singled.

Biglin fans 11 in BC win

Biglin, who went all seven innings, struck out 11 and walked four. He gave up two runs on four hits.

The Bucks (9-16) led 3-0 after four innings, but Crestline made things interesting with single runs in the fifth and sixth frames.

Alex Kanney hit two singles and drove in a run for the Bucks, while Justin Dentinger and Kaiden Vaughn each singled. Brady Kerschner drove in a run.

The Bucks will travel to New Riegel Thursday at 5 p.m. In a district quarterfinal.

Myles Miller allowed five runs on nine hits in five innings on the mound. He struck out five and walked three.

With the win, the Stockaders travel to Hopewell-Loudon at 5 p.m. Thursday.

The Flyers scored in four of five innings it batted, included an eight-run fourth.

Fostoria had only two hits and committed five errors.

Trey Groves doubled and Devin Mauricio singled for the Redmen.

Karsen Bemis took the loss in two innings on the hill. He gave up three unearned runs on four hits.

MANSFIELD — Bellevue led Mansfield Madison 1-0 through three innings before it got the bats going in a 9-1 non-league win.

Ethan Prenatt (double), Garrett Vickery, Chase Eisenhauer and Brad Miller all had two hits for the Redmen. Each had an RBI, while Vickery drove in two runs. Phillip Putnam added an RBI.

The Redmen used five pitchers in the win as Dalton Hay started and got the victory in three innings of work. He scattered just two hits and struck out five.