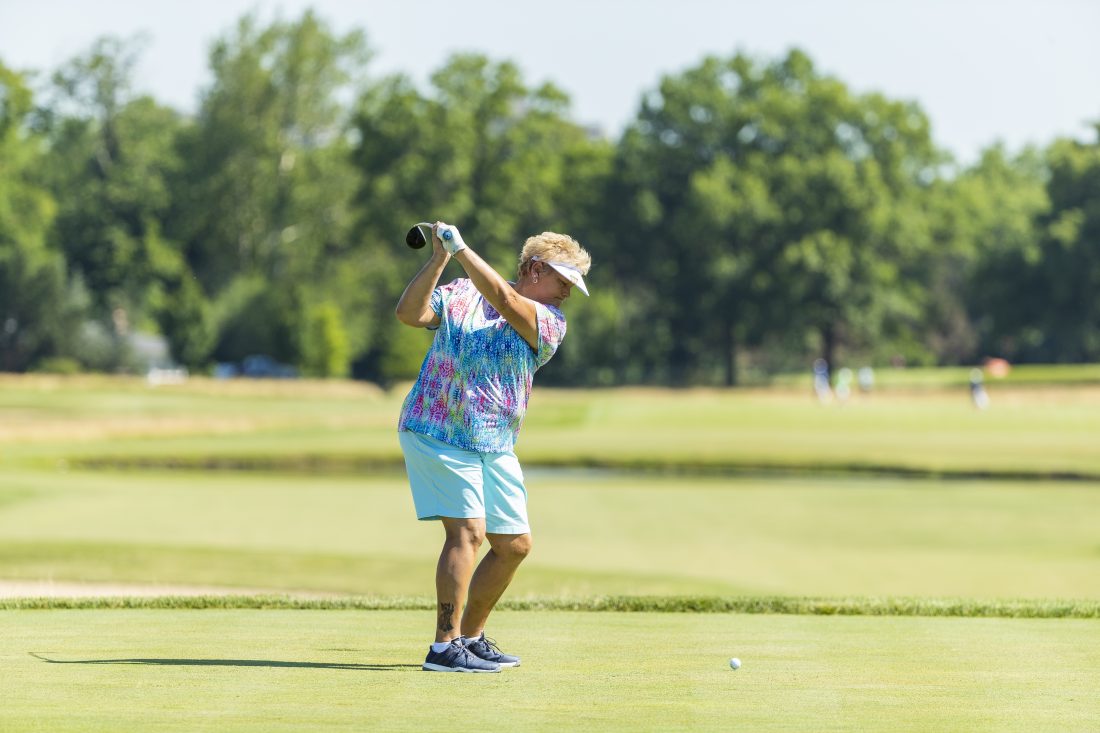 Cheryl Fox hits a shot on the ninth tee during a practice round ahead of the 2018 U.S. Senior Women's Open at Chicago Golf Club in Wheaton, Ill. on Monday, July 9, 2018. (Copyright USGA/Chris Keane)

The Tiffin native and Columbian High School graduate is competing in the event for the second consecutive year. It takes place at Pine Needles Lodge and Golf Club in Southern Pines, North Carolina, and begins Thursday.

Last July, Fox played in the event at the Chicago Golf Club, and fired a 160 over two days, missing the cut.

So this year, the 1984 TC grad is taking a different approach.

“There’s no expectations,” she said. “I think that’s what happened last year, was my practice rounds, and I was feeling so good in practice, I started placing some lofty goals of how this should go down, but every day’s different in golf.”

That was certainly the case for Fox last year. After shooting an 86 in the first round, she rebounded with a 74 on Day 2.

The 74 gave her confidence for this weekend. And it also helped in April when she was playing in a qualifier for this year’s Senior Open in Lakeland Florida.

Through four holes, Fox was sitting 3 over par.

“And for me in the past, that probably would have just tanked my mood,” Fox said. “My attitude would have went south, and I would have popped up another bogey, or double, or something.”

But this time, Fox kept her head an answered with three straight birdies.

“So, as it turned out, even (par) was the medalist at my qualifier,” she said. “So I have that to reflect on, that I didn’t let it get away from me.”

When she was interviewed last week, Fox still was in Florida, where she spent the winter. After the tournament, she said she will return to work at Fostoria Country Club, where she had been director of golf.

Fox said that part of the reason she has remained down south is because the grass in Florida — Bermuda — is the same that they use in North Carolina.

“I worked a lot during the summer, but since I’ve been in Florida I’ve managed to practice and play and get my game back where it needed to be,” Fox said.

She added she’s going to keep playing and trying to make other tournaments.

“I’m gonna be playing about five state opens and trying to play a couple qualifiers … PGA has several tournaments now that you can Monday-qualify for. It’s a lot of people for a couple spots, but you just never know.”

Fox said she will attempt to play in the Marathon Tournament in Sylvania, as well as the Canadian Open.

“The Jamie Farr, Marathon, that’s a lofty goal for me, I want to try to go up there and Monday-qualify,” she said. “You can try to Monday-qualify for the Canadian Open and stuff like that. So, I’ve got a lot of golf this summer.”

And, though she’s shying away from expectations, Fox said there are some things she’d like to do this weekend in North Carolina.

“I’d like to be able to not have to qualify (for the Senior Open) next year, but that’s a top 20,” she said. “If you finish top 20, I think you get to go back automatically.”

Fox said the key is keeping the right attitude. And she credits her caddy, Mike O’Connor, who she says keeps her loose.

“This next shot does not define my life or my golf career,” Fox said. “I realized one time that I’m so wound up about every single little shot, like it’s live or die.”

That’s what Fox wants to avoid.

“Process, execution, that’s just kind of how they’ve been talking and how I’m practicing, and just trying to control what I can control and forget about what I can’t,” she said.

Fox is scheduled to tee off at 8:58 a.m. Thursday on the first tee. She is going to play with Patty Moore, an amateur, and Nancy Scranton. On Friday, she’s scheduled for the second-to-last tee time on the 10th tee.

Fox said the confidence in herself is there.

“Use the word ‘belief,’ because I’ve been using it a lot lately,” she said. “I believe more that I definitely have some talent, I believe in myself in that regard.”

No expectations, but maybe, some really good golf.