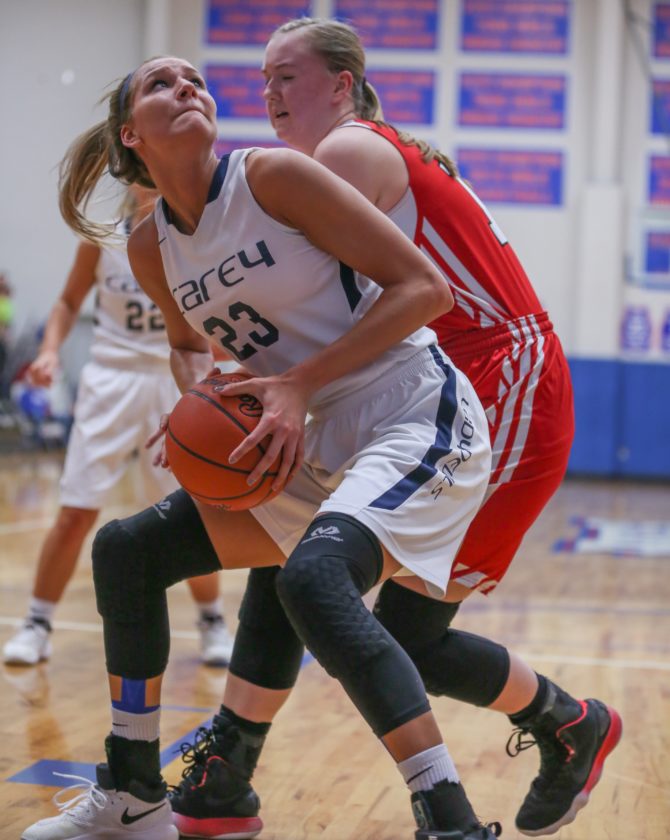 FINDLAY — Two of the best girls post players in the area were on full display Thursday night in a Division IV district semifinal at Liberty-Benton.

Carey’s Sydney Kin and Arcadia’s Kennedy Pratt, both 6-foot-2, put on a show as Pratt ended with 30 points and six rebounds, while Kin had 28 points and nine boards.

However, it was Carey that got the better of the Redskins, 55-45.

Pratt had 30 points, but just two in the fourth as the Carey defense held Arcadia scoreless for the final 3:09 of the game.

“We finally doubled over on her,” Carey coach Phil Vaughn said. “They have such great shooters, so we decided we were going to take their shooters away and play everyone one-on-one. It just a little bit of bad coaching for a quarter and half and not making an adjustment. We gave up some open 3s, but they didn’t make them.

“We were putting more pressure on (Pratt) as she turned and faced and made her move from the elbow and get her to try to shoot some off-balance stuff. She was getting too deep too much.”

The Blue Devils looked ready to play from the opening tip as they were all over the Redskins (20-4). After a Pratt and-one, cutting Carey’s lead to 9-6 with 4:28 left in the opening frame, Carey ended the quarter on a 13-4 run behind nine points from Kin, including a 3-pointer as Carey led 22-10.

Pratt really started to enforce her will in the paint in the third quarter, scoring Arcadia’s first 11 points, including a 7-0 run by herself to bring the Redskins within 32-30 at the 5:34 mark of the third quarter.

However, Kin responded with five consecutive points to regain control. Arcadia got within 41-38 with a minute left, but Carey’s Destiny DeFeo swished a triple to end the period.

The big key for the Blue Devils was withstanding foul trouble for Kin. She picked up her fourth with 2:24 left in the third and sat out seven minutes of game time.

“That seven minutes … that’s why you practice and put other people in at different times or situations like that,” Vaughn said. “They stepped up on the defensive end and made enough shots on the offensive end to keep that lead.”

With Kin on the bench, Pratt and Samantha Watkins started the fourth with buckets to get the Redskins within 44-42. DeFeo delivered a layup to give the Blue Devils some breathing room. Neither team scored for the next three minutes until a trey from Arcadia’s Reagen Pratt cut the score to 46-45 with 3:09 left.

Vaughn called a timeout and drew up a play that was well executed. Sydney Ferguson got an open look at the free throw line and drained it.

“For the whole game, I don’t know if we were excited or what but we got into a hole early. I think we were down 13 points early in the first quarter,” Arcadia coach Randy Baker said. “We come back and cut it to one point and then probably didn’t score again after that.

“We missed some opportunities and some good looks. We did not take advantage of situations that we should have and they did. We needed to do some things and cut the deficient or play with the advantage when Kin with four fouls and we didn’t gain much when she went out.”

Heidelberg commit DeFeo backed Kin with 10 points as the Blue Devils forced 16 turnovers and only had nine.

“It was a big group of seniors reaching down in that didn’t want to quit playing,” Vaughn said. “It’s right there for them. I seen that in Destiny, I guess. She made one of her layups getting to the basket and then one rolled out, but I seen that in her that they wanted to win. I think that was the difference.”