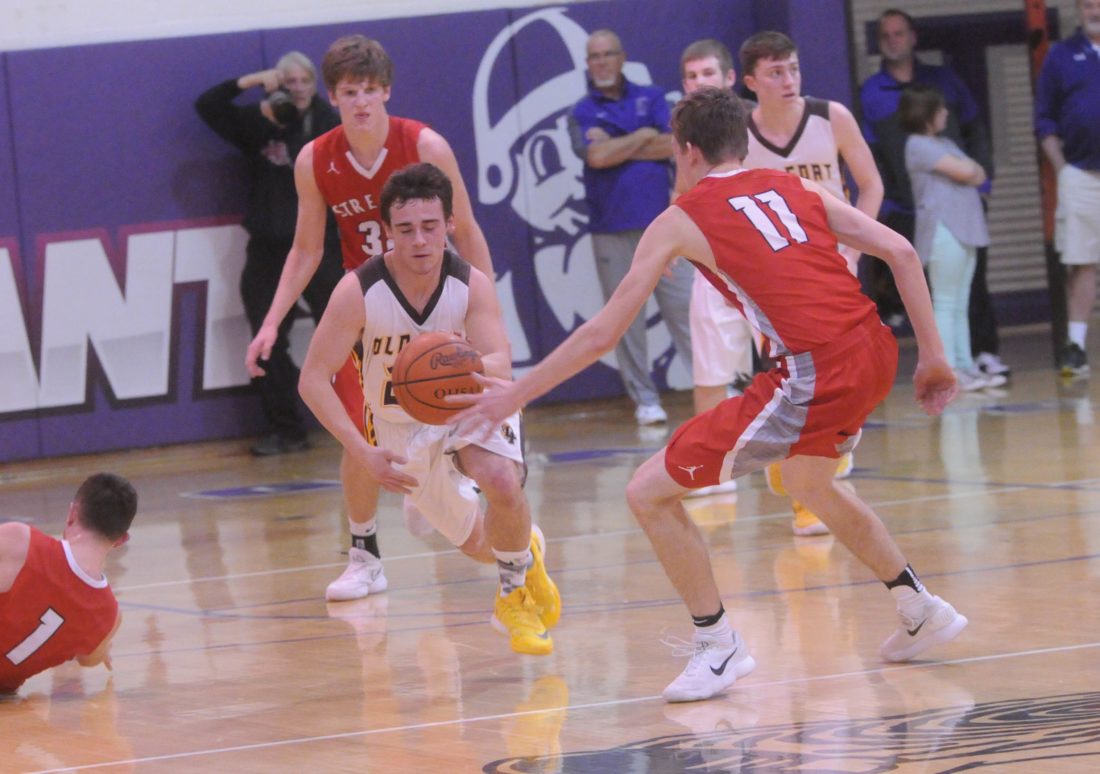 FREMONT — A step ahead of the pack and victory assured, Jacob Webb put the finishing touches on a spectacular night for his team and himself.

The Old Fort senior raced down the floor for a layup with one-tenth of a second remaining in regulation.

The Stockaders’ student section — which packed the section just to the right of Old Fort’s basket, loved it.

But then, it had a lot to love Friday night.

Webb — named the Sandusky Bay Conference River Division’s Player of the Year — finished with 26 points, seven assists and four rebounds, and led the Stockaders to a 59-47 win over St. Joe in the Division IV district quarterfinals at Fremont Ross.

The win also marked Eric Hoover’s 112th as Old Fort’s coach, surpassing Rick Renz for the most in program history.

Eighteen of Webb’s points came after the break, as the Stockaders used an 18-6 spurt in the third quarter to give themselves a cushion against the Streaks.

“I struggled a little bit shooting the ball in the first half,” Webb said. “I came out in the third quarter, made a few buckets, got my confidence going. I got my teammates in it, we made a big run there, and that was probably the difference in the game.”

St. Joe coach Jonathan Will said his squad did what it could to slow Webb down, but it was just too difficult.

“Second half, we even tried using what we feel is our best on-the-ball defender, between Mikey More and Dylan Fillater both, to try and keep him in front,” Will said. “You try and … if you zone them, they have enough shooters to hurt your zone. If you get out and guard (Webb) in man, he’s so quick and hard to keep in front. And then, when you help out from the baseline, he just dumps it down. Those were things we struggled with.”

Old Fort coach Eric Hoover said that when St. Joe went to a man defense in the second half, the Stockaders spread out their offense.

Freshman Zach DeWese also gave a standout performance for Old Fort, finishing with 19 points. Like Webb. DeWese saved his best for the second half, scoring 14 over the third and fourth quarters. Mason Salas and Zach Kohlenberg each added six points.

The win improved the Stockaders to 14-9, and sent them into Tuesday’s district semifinals at Fostoria, where they will take on top-seeded Arlington, which upended Hardin Northern 61-24 in the second game Friday.

St. Joe was able to stay with the Stockaders early. It trailed 13-8 after one and was down just 23-21 at the break, and that was only because Webb was fouled on a 3 attempt in the final second of the second quarter. Webb made two of the three free throws.

Things looked good for the Streaks at the beginning of the third quarter. St. Joe took its first — and as it turned out, only — lead on the first possession of the third quarter, when Tad Foster hit a 3 from the right corner. But the brief advantage lasted only seconds; DeWese answered with a trey.

And then Webb and Old Fort took off.

A 3 from the right wing at the third quarter buzzer from Webb pushed the Old Fort lead to 41-30. In the fourth, a Webb layup made it 45-32 about a minute in.

Then St. Joe rallied. A basket by Chris Morrisette brought the Streaks within 10, and then two free throws by Filliator cut the Old Fort edge to 47-41 with 3 1/2 minutes left.

But this time, it was DeWese who had the answer. With the the ball and just to right of the basket and against tight defense, Dewese fought through to put the ball up and in. He also was fouled.

When the ball went in, Hoover punched the air in excitement. DeWese made the ensuing free throw, and Old Fort was back up by nine with 3:15 left.

“(DeWese) can put the ball in the basket,” Hoover said. “He finds ways to finish. He is not scared to put shots up in there. Those (defenders) are all four, five inches taller than him. He put a little English on it and got it to go in.”

Will said the Streaks just couldn’t complete the comeback.

“Even when we go to make a run there, you know, we knew they’d keep throwing punches, throwing punches,” he said. “We just couldn’t cut into it. We’d get it down to where we felt comfortable, and then we’d have a breakdown at one end or the other. An untimely foul that led to a three-point play — whatever it was — it just seemed like we couldn’t get a stop when we needed to.”

Meanwhile, Hoover moves on to the next round with a chance to up his win total.

“That’s awesome,” Webb said. “I’m super happy for him. He’s not an all-time winning coach for no reason.”

It’s a special record for Hoover. He played basketball at Old Fort, and played for Renz in his senior year. He also worked as an assistant under him.

“He certainly was an influence on how I do things now, along with my other high school coach, Jerry Bauer, and my college coaches” Hoover said.

“Being in a family of coaches has had a big impact on this for me,” he said.