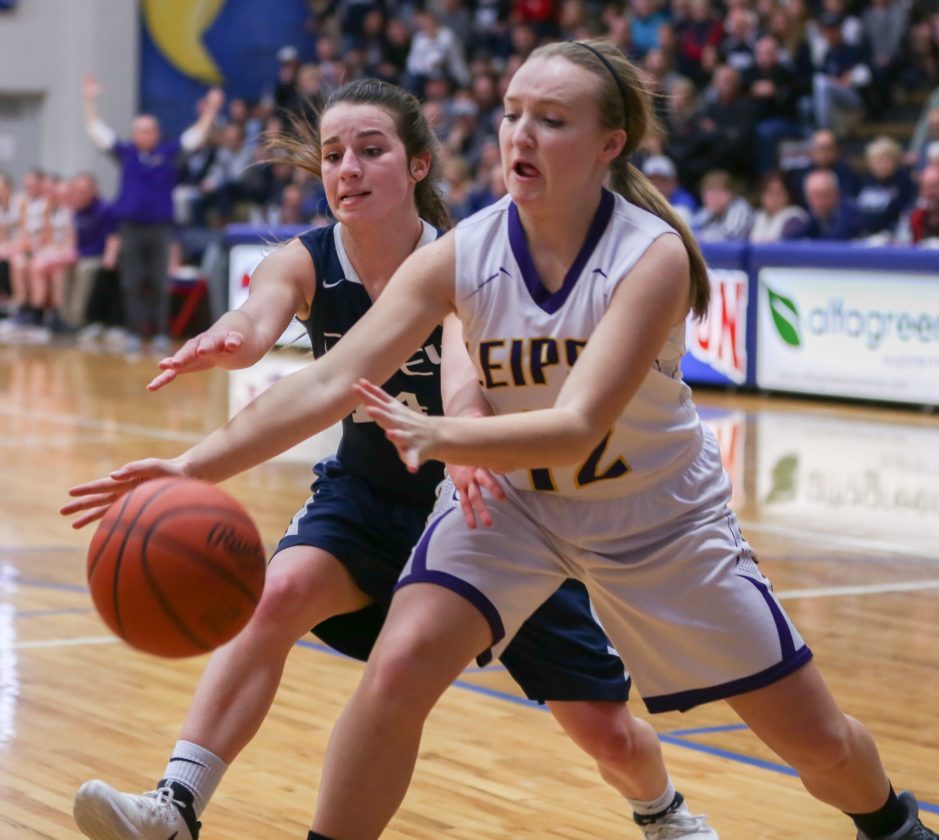 FINDLAY — The past few times Carey made it to the district final, it had to try to combat St. Wendelin’s 6-foot-4 post Kamryn Troike.

This time, it was a little different.

The Blue Devils had the height advantage down low with 6-2 Sydney Kin. However, Leipsic had length and size everywhere else on the perimeter, which made it tough for Carey’s guards to find Kin, especially in the fourth quarter Saturday when the Vikings took control and won the Division IV district final 58-44.

At the half, Kin recorded 10 points and 10 rebounds as Carey trailed just 25-20. She ended with 13 points and 15 boards. With the Vikings’ length, it deterred a lot of shots from the perimeter, which were the only shots Carey had available in the fourth period.

“On both ends of the floor whether it be passing or offensive rebounds by them … we lost (Heather Lammers) a couple times. It was just a combination of things,” Carey coach Phil Vaughn said as his team ended the season 22-3. “(Carlee Siefker) and (Peyton Henry) are both listed a 5-9 as guards, so they have a lot of length.

“They got some deflections on our 3s and even contested a lot of our 3s. We didn’t really get a lot of good looks, plus at the same time, they were jamming Sydney Kin where she couldn’t get loose.”

Carey took an early 5-4 lead after a Destiny DeFeo 3-pointer two minutes into the contest, but Leipsic (22-3) countered and started to execute. The Vikings went on a 7-0 run on baskets from Lammers and Kierra Meyer (both 1,000 point scorers) and a triple by Siefker. Leipsic took the lead and never gave it back as it led 15-12 after the first stop and by five at the half.

“They executed offensively, and when we hit shots we can be pretty good,” Leipsic coach Gary Kreinbrink said. “We aren’t real big inside or anything like that, so we just play for each other and that’s what they did again tonight.

“We tried to mix it up and go man-to-man on occasion just to keep them off-balance a bit. We just tried to front and get backside help. We only had two days to get ready for it. We did play (Makayla) Elmore during the season, who is sort of similar (to Kin) as she can play on the perimeter too, so it wasn’t like we had no idea what we were going to do.”

Lammers opened the second half with a trey to give the Vikings a 28-20 advantage. But Carey got within two after back-to-back 3s from Kin and Sydney Ferguson with 6:05 left in the third.

The Vikings then took control with a 7-2 run to end the quarter and then scored the first five points of the fourth to take a commanding 40-29 lead.

Amid the run in the third quarter, the Blue Devils struggled finding any shots as they turned the ball over seven times and had 18 for the game.

“We were really concerned with Kin and she ended with 13 I think. We wanted to hold her under 15 and that’s what we did,” Kreinbrink said. “They had some other girls step up. (Bry Curlis) really played well for them.

Carey tried to extend the game by fouling in the fourth quarter, but Leipsic put the game away, going 16 of 19 in the period from the charity stripe.

“That’s what you gotta do to win big games — hit your free throws,” Kreinbrink said. “If you don’t hit free throws you’re giving them opportunities and the momentum can change, so once we got it to a point where we got into the bonus, that helped.

“Really proud of the kids. I don’t think this was a team really projected out to be this kind of season, but they really kept playing hard all year and I’m proud of them.”

Lammers led the Vikings with 22 points and Meyer finished with 18. For Carey, backing Kin was Ferguson with 10 points, while DeFeo had nine and Curlis ended with eight.

All of them played their last game for Carey, along with Amber Nash, Taylor Wenzinger and Caitie Carter.

“About 82 wins (for this senior class). It’s just one of those classes that comes along and I think Sydney and Destiny started playing varsity as freshmen and the others were so competitive, even when they weren’t varsity players early,” Vaughn said. “They meant a lot to this program. It’s going to be hard to see them go. They were an important class to our program.”