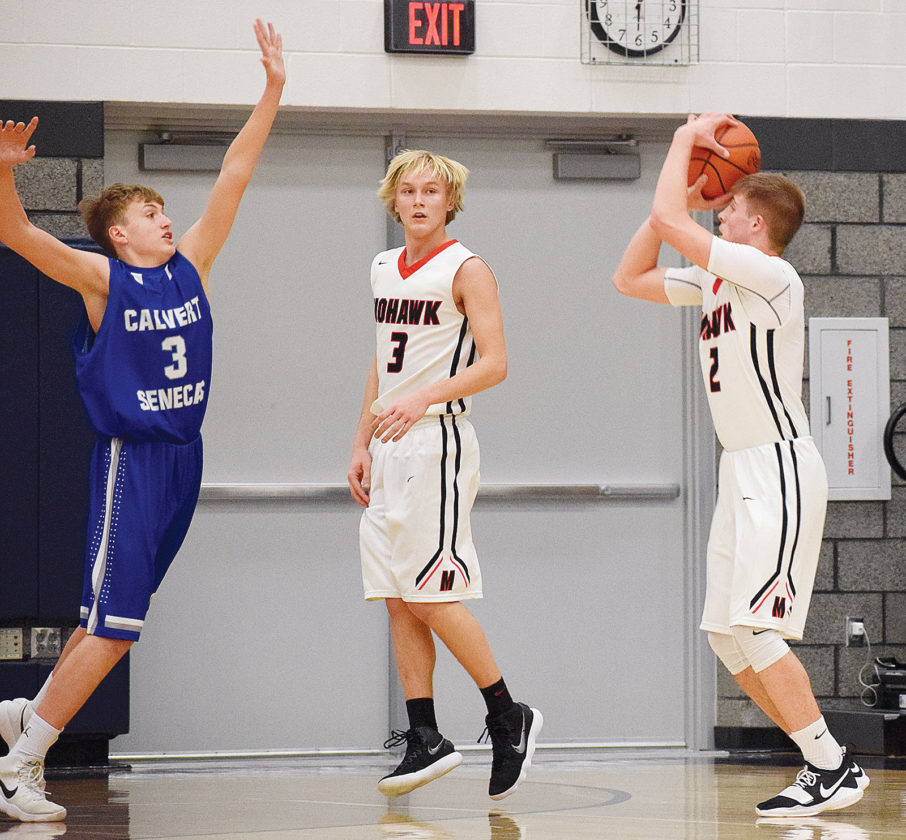 It’s the reality of tournament basketball.

There were plenty of sweaty palms Friday night in a pair of Division IV district quarterfinal games at Carey.

In the end, Mohawk edged Calvert 45-41 and New Riegel beat rival Hopewell-Loudon 56-49 in overtime as the two winners will now play each other Tuesday at Fostoria at 8 p.m. in a district semifinal.

Both games came down to the final possessions with some big baskets and a big call that influenced the contests.

The Senecas led the second-seeded Warriors for much of the game until the Warriors tied things up at 32 entering the fourth quarter.

Mohawk continued its surge in the fourth frame, scoring the first four points off buckets from Chris Klopp and Kaiden Hammer. After a pair of free throws from Calvert’s Connor Kennedy and Mohawk’s Zach Hayman, Klopp made it a 40-34 contest with a putback with 1:46 left.

Calvert freshman Nick Seifert converted a tough runner and Nic Somodi drained a transition 3-pointer to pull the Senecas within 40-39 with 58.3 seconds left.

Park Hemminger drove to the basket and converted a tough layup to tie the game with 8.2 seconds left.

An official from across half court raced in and called a charge on the senior guard, which ended up being Calvert’s last chance. The Senecas fouled Hayman and he put the game away with a pair of free throws.

“We gave them everything we could. Coming in, just like we did for much of the season, we battled for 24 games now and gave them everything we could up until the last second,” Calvert coach Jon Otterbacher said. “If we take care of the ball a little bit better (19 turnovers), make a shot here or there, or the ball falls your way a few more times, you can win the game.

Calvert started well after falling behind 7-2 early in the first quarter. It responded with a 10-0 run to gain control as the Senecas led 17-14 after one. Both teams struggled to score in the second quarter, but the Senecas held a 25-20 advantage at the half.

“They are used to getting pressed. They are used to seeing zones,” Dunn said. “Even though they might not have a high shooting percentage from outside, they were prepared to beat our press and attack our zone, so at halftime I wanted to throw something at them they probably weren’t expecting.

“Give our guys credit. We don’t play man-to-man a lot, it’s out of our norm. We were able to get stops when we needed them. We got deflections, so I’m excited for those guys. It shows we can do a lot of different things.”

Somodi led Calvert with 12 points, while Hemminger tacked on 10 and Josh Recker dropped in nine.

It was a tough finish for Otterbacher’s first year of taking over for Ted Willman and the Senecas’ program, but getting a tournament win and improving throughout the season he said were big accomplishments.

“Going into the summer, we really didn’t know exactly what we would have. We never had all 23 guys together at one time, so we were unsure,” Otterbacher said. “I told them in the locker room that we’ve been the underdog in almost every game this season and we battled and battled every time.

“There have been countless people from northwest Ohio thank our players and our coaches for how hard they play and how well they’ve done against that adversity.”

Hayman led all scorers with 17 points for the Warriors, while Keith Jenkins added 12 points and Klopp finished with eight.

It’s the second straight district semifinal appearance for the Warriors as Dunn is in his second season as coach. This one was a bit different than last year’s as the Warriors were expected to make it.

“I try to instill in them to play with pride and to represent Mohawk basketball,” Dunn said. “I think the kids really attach to that. We are a blue-collar school and I think the kids have that attitude every day at practice. The attitude to want to prove people wrong is the thing that really drives these kids.”

Blue Collar is the perfect way to describe the defensive effort New Riegel (13-11) displayed Friday against the rival Chieftains.

Blue Jackets coach Dave Losey made some adjustments, but the biggest was switching up defenses on H-L big man Luke Bolte, who had just five points Friday.

“We did a great job on him tonight. Last game we played behind him and that was a mistake,” Losey said. “We decided to be aggressive and go in front and it really paid off. We put Austin (Lescallett) on him, who is a little more physical in the post and he did a great job in the post. He had an all-around great game.”

H-L almost survived New Riegel on the heroics of sophomore guard Jordyn Jury, who gave his all and compiled 29 points for the Chieftains, including a couple NBA 3s.

The contest was close throughout, but Jury was spectacular with 14 points in the first half, including eight in the opening frame. The Chieftains led 13-8 after the first period and 21-18 at the half.

A lot of the second half was Jury driving to the rim either trying to finish through contact, getting fouled or dishing out to teammates for looks.

The Chieftains got a little breathing room late in the third quarter after a Jury bomb, but the Blue Jackets responded with a 6-2 run to finish the quarter as Lescallett scored four consecutive points in the run.

Down just 33-31 entering the fourth, the Blue Jackets were within striking distance. They made a run midway through the quarter to lead 42-36 after two Nick Reinhart baskets and a Cole Noftz floater with 3:36 left.

New Riegel regrouped and went through senior Ben Dryfuse, who dropped in a contested layup with 47.3 left. H-L turned the ball over and New Riegel got a chance to win in regulation, but it was a half-court heave from Noftz, which banked off the backboard.

In OT, H-L was able to score just once — on a Jury drive — as New Riegel went 9 of 13 from the charity stripe down the stretch to close it out.

“I think it really helped being in that situation. It was our fourth overtime game this year,” Losey said. “I don’t think there was any panic in the guys and it was business as usual. I thought they were really composed in overtime.

“Those first three quarters it seemed like we kept bringing it to the edge within two, but couldn’t get over the hump. In the fourth, we made a little surge and got the lead.”

Backing Jury was Rumschlag with eight points and Travis Milligan with seven points and seven boards. For New Riegel, Lescallett had 18 points, while Reinhart chipped in 15 points and Dryfuse ended with 14 points and nine rebounds. Noftz dished out four assists.

“We wanted to go at them a little bit inside and we thought Bolte would be on (Lescallett) down low and he did a nice job of being patient and making some moves. At that time, we weren’t playing good basketball,” Losey said about his offense in the first matchup. “We were playing tentative. Tonight, and the last few games, we’ve been much more aggressive.

“We’ve been letting it fly. The fortune goes to the bold.”