Chieftains, Streaks each win to set up showdown in district final 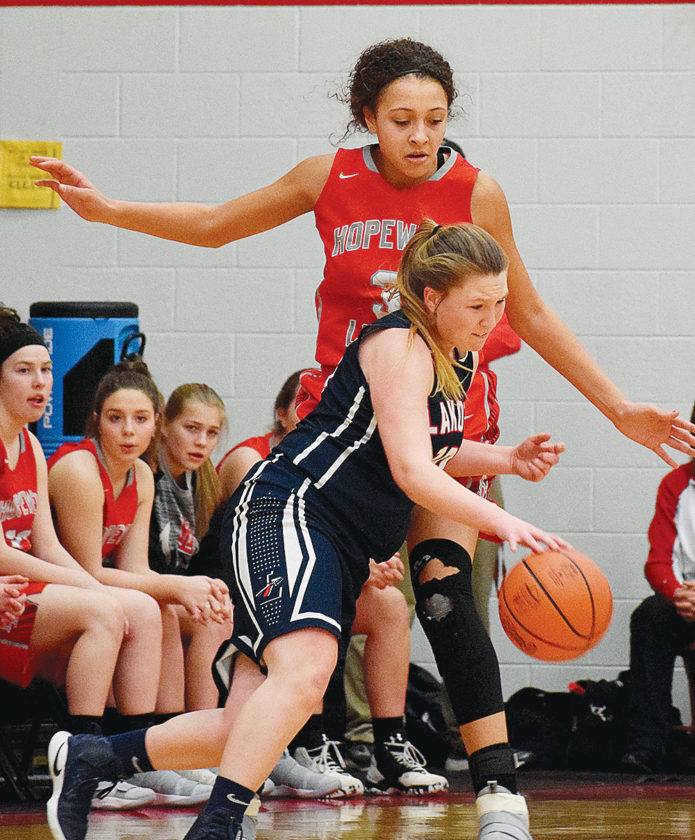 FOSTORIA — The result was pretty much the same, but it had a much different look.

Hopewell-Loudon’s girls dominated Lakota in a regular-season game back in December. Matched against the Raiders again in the Division IV district semifinal, the Chieftains were challenged in the first half and early in the third period.

But Hopewell-Loudon then scored the 23 unanswered points over an eight-minute span to take control and roll on to a 63-32 victory at Fostoria High School Thursday night.

The Chieftains will take a 21-4 record into Saturday’s 7 p.m. showdown with Fremont St. Joe for the district championship and a berth in the next week’s Elida regional. The Crimson Streaks rallied to edge Old Fort 49-41 in the Thursday’s opener to improve to 21-3.

Hopewell-Loudon led 24-12 midway through the second period, but a 3-pointer by Mackenzie Feathers and baskets by Brooke Shank and Alexa Gabel pulled Lakota to within 26-19 at the half.

Feathers added another 3-ball and Samantha Wallace’s free throw made it 26-23 just 41 seconds into the second half.

And then, wham. Hopewell-Loudon picked up the pace big-time.

Jacque Burns had a stickback and assisted three other baskets, two by Kenadee Siebenaller, in a 13-0 finish to the quarter for a 39-23 advantage.

But the Chieftains weren’t done, mainly because 6-foot-3 freshman sensation Makayla Elmore was the just getting started. Elmore scored the first eight of a 10-0 start to the fourth period and the matter was settled.

“We knew (a diamond-and-one press) would hurt and the running, I thought the running would hurt them because once you take the legs out, the 3s don’t go in,” Hopewell-Loudon coach Bob Gase said. “When we run, we’re a pretty good team and I thought we did a pretty good job of that in the second half.”

“We played really hard in the beginning and then just kind of ran out of steam a little bit,” Lakota coach Cathy Hanek said. “They turned up the pressure and we didn’t have enough at the end.”

Elmore scored 14 to dominate the fourth period and finished the night with 23 points and 14 rebounds.

“Her shot came around in the second half,” Gase said. “She’s our best offensive player, no doubt about that. When she’s having a rough night, we struggle a little bit but she came out and had a really good second half.”

“We played our roles better in the second half,” Gase said. “It’s fun to watch these guys when they do what they’re supposed to do.”

In the opener, Old Fort took a different defensive route and had Sandusky Bay Conference River Division champion St. Joe on the ropes.

“We tried to run a regular man-(to-man defense) the first time and we tried a sag man the second time and they just killed us on the 3-point line,” Old Fort coach Jenny Ritzler said of two regular-season losses to the Crimson Streaks. “We tried a 3-2 zone tonight and I’ve never run one of those in my life.”

It brought results as the Stockaders (11-14) opened a 14-8 lead in the first period and they were on top 35-31 to start the fourth. Along the way, they worked St. Joe for 28 total turnovers.

Senior Whitney Bilger turned a couple drives, one of them a slick baseline move past two defenders, into baskets and Old Fort had a 39-32 advantage with 6:06 to play.

The Streaks turned to full-court pressure and got the desired result, scoring 14 straight points to turn the game around.

“In the fourth quarter, the girls showed a lot of heart and grit and they stuck with it and didn’t give up,” St. Joe coach Mallory Holliday said. “I think that’s what helped us win the game.

“We played with more confidence offensively and when we put on the full-court press, it caused more turnovers at their end and that helped us out a lot,” she said.

Old Fort finished with 20 turnovers, but 10 of those came in the fourth period.

“They put that press on and they started to pick up their pace and it just kind of threw us for a loop,” Ritzler said. “We tried to play fast right along with them, when being up, you don’t have to play as fast.”

Adrienne Wehring, who led the Streaks with 18 points and 11 rebounds, scored five straight points to pull her club within two. Then Belle Michael knocked down a go-ahead 3-pointer with 2:43 to play.

St. Joe stretched the lead with a Wehring basket off a Miranda Wammes pass and by hitting 7 of 10 free throws over the final 2:31.

“I told the girls we need to look to get the ball more into the post in the second half,” Holliday said. “Once we started doing that and Adrienne started attacking, that helped us out on offense.”

Free throws were a key element to the game, not so much the Streaks’ accuracy but the Stockaders’ inaccuracy. St. Joe converted 14 of 23 while Old Fort managed just 8 of 21.

“It wasn’t great, but we definitely improved over the year,” Ritzler said of her team’s season at the line. “I think against Cardinal Stritch (to open the tournament) we were 15 of 16 and we weren’t as good against Maumee Valley but we still were much better than 8 for 21.”

Hopewell-Loudon beat St. Joe 66-42 on the Streaks’ home floor on Dec. 30. The Chieftains are seeking their ninth trip to regional tournament play and first since going three straight years from 2005-2007.