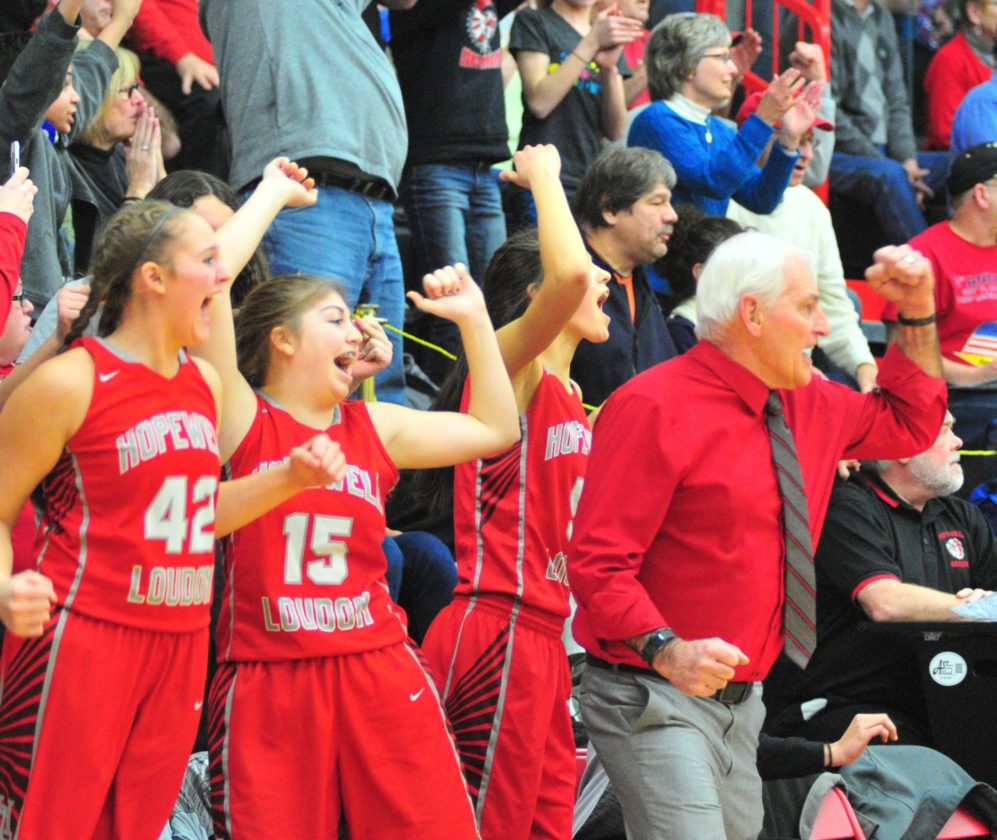 Coach Mallory Holliday and the Crimson Streaks were determined not to let her do that again in Saturday’s Division IV district championship game at Fostoria High School.

She didn’t. But she got a lot of help from her friends.

Hailey Coppus and Jacque Burns combined to score 35 points and Kenadee Siebenaller knocked down a game-winning basket with 15 seconds to go as the Chieftains posted a 58-56 win.

Saturday’s game was tied four times in the fourth quarter alone, the last occasion when St. Joe’s Adrienne Wehring scored on a post move to make it 56-56 with 41 seconds left.

The Chieftains came out of a timeout and Siebenaller found herself open with 15 seconds to go and banked in a foul-line jumper.

“He (coach Bob Gase) always preaches in practice take the shot you would take at the last second,” said Siebenaller, who smiled while admitting she did not call the bank shot. “I thought I was going to brick it. I was worried.”

At the other end, Elmore blocked an inside attempt by Wehring and Olivia Zender gained possession for H-L. Wehring’s desperation throw off a rebound at the buzzer was well off the mark.

“Actually, we were looking for something a little bit different,” Gase said of the winning hoop. “I told them if they didn’t get the shot we wanted on the inbounds, (they were) to bring it back out and they know where I want my shots at — five feet and in. And she was pretty close to that.”

Hopewell-Loudon romped 66-42 when the two teams played in Fremont Dec. 30. It was a much different look in the title game.

“Makayla had 30 points against us the first time,” Holliday said. “We did a really nice job of containing her in the post and they did a nice job of having other players hit shots to help them win the game.”

This time, Hopewell-Loudon’s biggest lead of the night was six points and the Streaks led by as many as five. But it wasn’t like they locked Elmore in solitary and threw away the key.

The 6-foot-3 post scored 17 points and grabbed 15 rebounds, 10 of them in the first period. Still, Elmore was challenged by constant double-teams in the St. Joe zone defense.

“I’m glad my teammates stepped up. It was a major help,” Elmore said. “I just needed it. I’ve had rough games in the past and they step up.”

Burns hit a couple baseline jumpers in the first period to get started on her way to a 17-point night. Her big quarter was the third, when she netted seven. She also finished with seven rebounds.

“That backside was open and that’s my spot,” the Chieftain senior said. “We took advantage of it, especially when it came to go-time.”

That was the second half. Hopewell-Loudon edged ahead 20-18 at halftime, but the Streaks challenged by nailing 5 of 8 from 3-point range in the third period. The attack was well-spread as Belle Michael hit a couple and Miranda Wammes, Callie Kelbley and Wehring had one each.

Wehring led the Streaks with 17 points and 12 boards. Wammes had 15 points and Michael chipped in nine.

The Chieftains countered from long range as well — Elmore hit a pair and Burns and Coppus one each — to trail 39-38 for the stretch run.

And what a stretch, especially for Coppus, who hit five 3-pointers and finished with 18 points, 12 in the fourth period. Three long balls were all go-ahead shots as was a conventional three-point play that put the Chieftains up 56-53 with 2:12 to go.

“We knew they were going to play Makayla hard and we had to swing the ball,” Coppus said. “And I knew that I had to be ready on backside to shoot and I was. My first one went in and I was feeling it the whole game.”

“Hailey stepped up. You don’t know how hard we’ve been working on her 3-point shot,” Gase said. “To come up with some of those clutch shots she took, it was like, wow.”

Wow indeed from a cast of many.