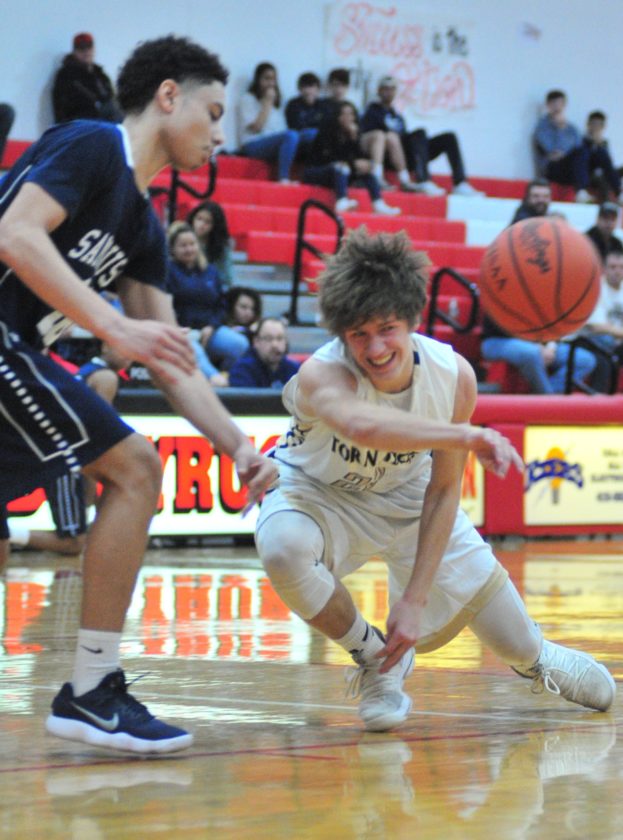 PHOTO BY PAT GAIETTO Columbian's Chase Frankhauser makes a pass while trying to get past Sandusky's JonTerris Johnson Wednesday during a Division II district game in Bucyrus.

BUCYRUS — Usually trying to beat an opponent three times in a season is difficult.

Unless its Sandusky against Columbian.

In the first two matchups this season, Sandusky topped Columbian by 33 points both times.

Needless to say, the Tornadoes had their work cut out for them Wednesday in a Division II district opening round game against the Blue Streaks.

Columbian tried its best to slow the pace down and keep Sandusky from exploding.

However, Sandusky scored 40 points in the opening half and went on to beat TC for a third time, 70-38.

“Despite the outcome of the first two games, I say this with confidence that the guys in the locker room and the coaches didn’t think it would end this way, but that’s life,” Columbian coach Travis Kinn said as his team ended the season 3-20. “I thought out guys did an outstanding job in the first half and in the first quarter near the beginning of executing what we wanted to do offensively and slowing things down.

“Their size, speed, length and athleticism, that hurt us on the defensive end as we gave up straight line drives to the basket and at halftime they had 11 missed shots and six offensive rebounds. That really got us into trouble. Playing that slow and still giving up 40 points in the first half is tough to come back from.”

The Blue Streaks had too many playmakers for Columbian to handle as 11 players scored — led by Keith Williams with 14 and Tahj Staveskie added 11.

“They have a three-headed monster in Keith Williams, Dylon Jones and Tahj Staveskie, those three guards are outstanding,” Kinn said. “They handle it well, they shoot it well, they defend well, they have a very high basketball IQ. I can’t say enough about those three and it was definitely a part of our gameplan was to try to limit them.

“In the first two games those three had either 40 or fifty points combined in the first half alone against us. I thought we did a good job of limiting their field goal attempts in the first half, especially Keith because he had only one field goal, but just a lot of points at the free throw line and they just wear on you.”

Columbian scored the first basket of the game as Todd Simonds drove to the basket for a layup and then Braden Brown put the Tornadoes ahead 4-2 two minutes later with another layup, but that was the only lead they had the rest of the game. Sandusky started getting hot shooting and carved up TC’s defense for 22 first-quarter points.

In the second quarter, Columbian pulled to within 26-15 after a Jared Akers 3-pointer, but Sandusky then ran off 11 straight points to take control.

“Our kids played well. We tried to force the tempo,” Sandusky coach Colin Irish said. “I think they tried to slow it down, but Noah (Caston) came in like an energizer bunny off the bench and we got a couple quick baskets off turnovers, so once we got a lead that was comfortable, we just kept the intensity going.

“We made some shots and penetrated the gaps. We controlled the basketball game all the way through.”

Williams had six points in the third quarter as Sandusky outscored TC 23-9 in the period and led 64-29 after three.

There was a running clock for the whole fourth quarter.

“We executed very well offensively and the guys were sharing the ball really well in the open court,” Irish said. “We played the passing lanes well also.

“I love those coaches and what coach Kinn is doing over there. He’s gotta be patient and stay the course. He’s got a good group of kids and a great coaching staff, but we just played really well tonight. We just wanted to make a statement.”

Akers led the way for the Tornadoes with nine points, while Donnell Brockington chipped in seven and LJ Reaves ended with six.

Columbian loses five seniors, but does have some young talent, so Kinn and the squad will have to regroup after a tough season heading into the offseason.

“When you win three games and lose 20 it’s never easy,” Kinn said. “It’s never always fun. I give our guys a lot of credit in talking to other coaches and going throughout the year asking if they are still playing hard and buying in and still practicing hard. Our guys have not had an attitude all year.

“The guys did everything we wanted them to do in practice and they competed all year. Unfortunately we didn’t get the wins we wanted, but that’s life. You don’t always get what you want. We will continue to work and grow.”