Summit, Stone have double-doubles in thumping of Wynford 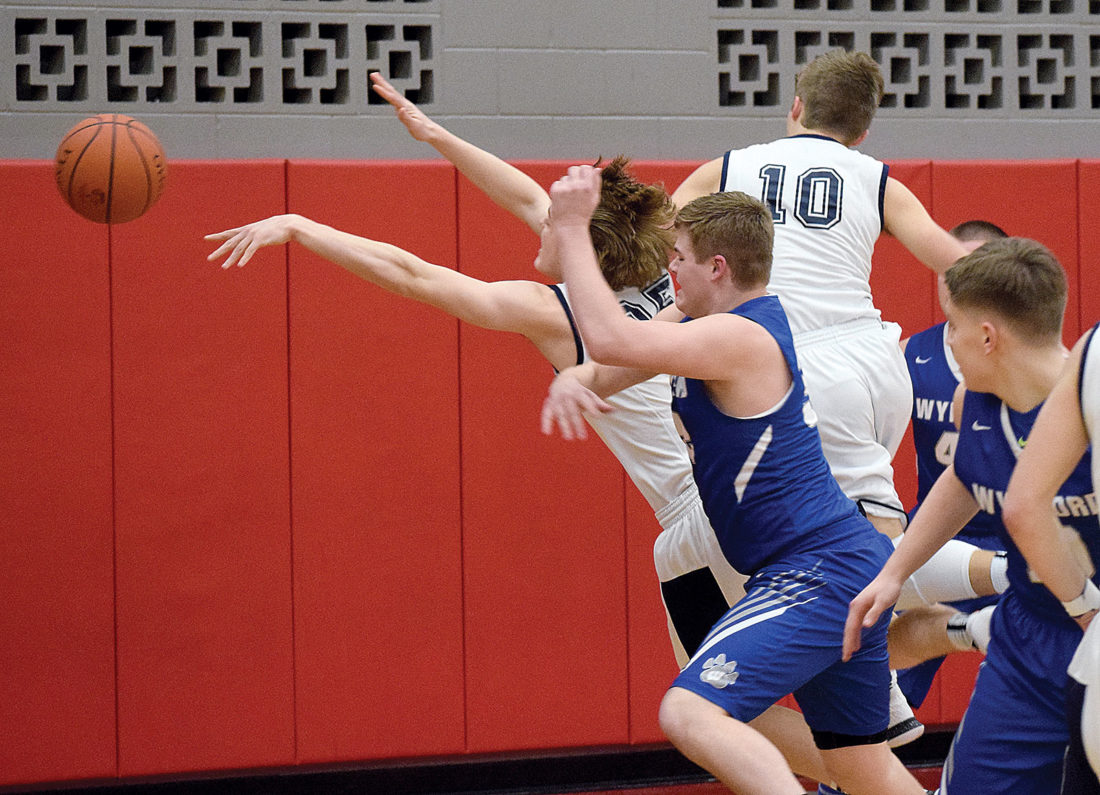 PHOTO BY JILL GOSCHE Wynford's Gavin Leffler and Carey's Griffin Summit (left) and Brayden Wentling fight for the ball during the game in Bascom Wednesday.

BASCOM — If you keep Cody Luzader from scoring, you’d have to like your chances.

At least, that’s how Wynford coach Jason Engel figured it.

Luzader is the Blue Devils’ second-leading scorer, and one of the top players in the Northern 10 Athletic Conference, averaging better than 13 points a game.

But Wynford wasn’t able to keep Griffin Summit from scoring.

All three Blue Devils scored in double figures Wednesday, and Stone and Summit cleaned up on the boards in Carey’s 64-41 win. It was the third time the Blue Devils beat their N10 rival this season, and it sets up a matchup with Western Reserve here at 8 p.m. Friday. Western Reserve pounded Bucyrus 86-59 in the first game Wednesday.

“We did play pretty well, and we brought it defensively,” said Carey coach Jamie Young after his team’s win. “We executed the defensive gameplan as well as we could have, I think.”

Summit was outstanding. He had a game-high 21 points, 10 rebounds, a block, and took two early charges.

“Griffin, when he comes to play, man, he’s an amazing player,” Young said. “He did the same thing against Upper (Sandusky) early on in the season. He’s just got that athleticism, and he’s got that ability in him. He’s a really good basketball player.”

Summit got going right away, scoring eight points in the first quarter and helping the Blue Devils to a 14-8 lead after one.

But Wynford kept the game within range into the second half. It trailed 33-23 at the break, and then pulled within 38-33 after back-to-back 3s by Kevin Hughett and Cole Heinlen with 2:05 left in the third.

But then Carey took over.

Summit nailed a 3 from the right corner, then made two free throws to put the Blue Devils back up by 10 as the game moved to the fourth quarter.

The quarter change did nothing to stop Carey’s momentum. Bame — who finished with 11 points — converted a layup, Jordan Dasher split a pair of free throws, and Summit added a three-point play, making it 49-33. It was part of a 14-0 spurt, punctuated by a Dasher layup with 3:35 to go. The Blue Devils led 53-33.

“Jordy Dasher came in and provided a nice spark off the bench,” Young said. “Jordy, he’s a pretty good player in his own right. He’s able to make plays most people don’t see as plays, but I see them, and he has a knack for it.”

Engel said Carey turned it up on both sides of the ball.

“I just think they made some more shots, and they turned us over a little bit,” Engel said. “They really defended Josh (Crall) with two or three guys at times.”

Defending Crall was a top priority for the Blue Devils. He came in as the N10’s leading scorer, averaging just under 20 points a game.

Carey limited him to 17 points. Although it was a team-high, it was his lowest point total of the season against Carey.

“Last time we played he had 37, time before that he had 24,” Young said. “I thought we did a really good job on him … he was our defensive focal point.”

Carey also dominated rebounding, with a 30-19 edge. Stone led everyone with 12 boards to go along with 14 points.

“Hayden doesn’t realize it, but he’s a big key to our success,” Young said. “If he can just control the points and control the boards, that’s all we need him to do.”

Hughett had 10 points for the Royals, while Heinlin had eight points.

As for Friday’s game, Young said that Western Reserve is a guard-oriented team.

“They like to shoot the 3-ball, they’ve got some really good players on their team,” he said. “They’ve got three guards who are really good, and we’re gonna have to really focus on, and try to contain their dribble and contest shots … it’s gonna come down to us playing defense again like we did tonight; focused and locked in.”