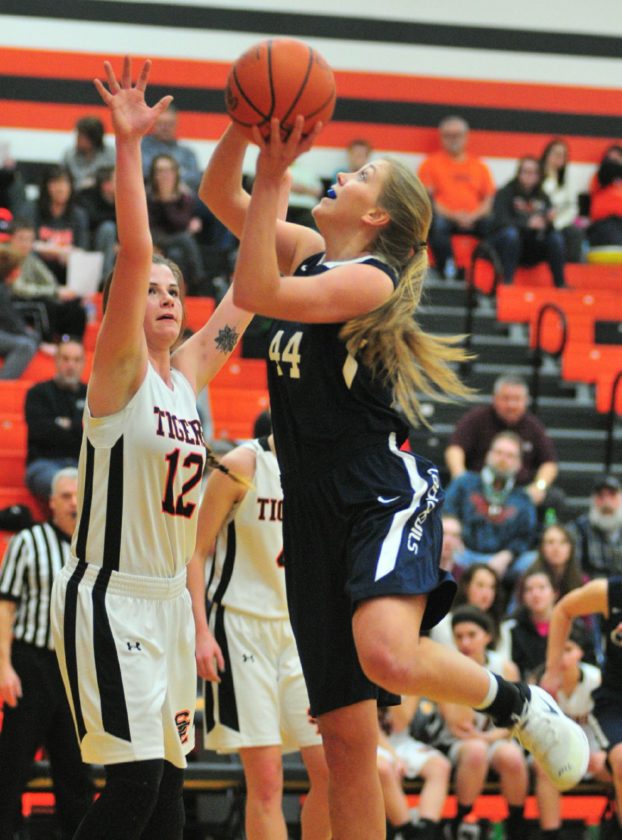 Kin, who scored the first 10 points of the game for the Blue Devils, dominated inside and ended up with 27 points and 11 rebounds in a 58-41 Carey win.

“She’s a high-caliber player. She can take the ball from the perimeter, she can catch it on the run,” Vogt said after collecting his thoughts for 10 seconds. “She can be lobbed to. She’s a good all-around player.

“I’m not making any excuses, but I would of liked to have some time in practice but the roads were so icy, but that’s not taking anything away from what they did because they are a good team. It’s hard to draw what you want to do to take some of that away.”

Kin also had a few blocked shots as she made things difficult for Seneca East (9-3, 5-3 Northern 10 Athletic Conference) to get anything easy in the paint.

“The guards did a good job of getting the ball up the floor, whether it was passing the ball or getting to the wing to get a good look at the post to get (Kin) the ball inside,” Carey coach Phil Vaughn said. “She was able to finish with some pressure.

“She can handle the ball and it was just one of those things where they have two pretty good athletes on our 1 and 2 (positions), so we needed her to alleviate (pressure) and to bring the ball up the floor. She did that for us a few times.”

Carey (12-1, 7-1) started well, with Kin getting good looks in the paint in the first quarter, but Seneca East was hanging in. Marina Adachi gave the Tigers their first lead (12-10) of the game on a step-back 3-pointer at the 2:04 mark of the opening frame. However, it didn’t last long as Destiny DeFeo drained a triple for the Blue Devils just before the buzzer sounded.

The Blue Devils started to pull away starting the second quarter with a quick 8-0 run, fueled by five Kin points and a Sydney Ferguson trey.

Seneca East struggled offensively in the period with leading scorer Jessica Bowerman on the bench with a pair of first-half fouls.

“The good thing about our team is that we don’t rely on one person. It’s equal opportunity all the time,” Vogt said. When Jess goes out, we expect Marina to rise up, Bonnie to rise up, Quiggle to rise up or whoever. We were just a little short tonight.”

Seneca East made a run to start the second half with a 6-2 spurt to pull within 31-29 with six minutes left in the third period.

Carey responded in a big way.

It responded with an 11-1 run to end the quarter and take a 42-30 advantage into the fourth where the Tigers never got the score back under 10.

“They have — if you look at the stats — Bowerman at 17 (points per game) and Adachi right there behind her and Bivens at a dozen or whatever, but that’s what you look at and the 3s they shoot and their average,” Vaughn said. “They can put the ball on the floor and I thought as a team we were able to control them a bit.”

Backing Kin was Ferguson with 10 points for the Blue Devils, while DeFeo had nine points and four assists and Bry Curlis, Amber Nash and Sadie Arend all had four assists. Arend also came up with four steals.

“It’s so tough the league when you look at it and it’s anybody’s for the taking,” Vaughn said as his team is still tied for the league lead with Upper Sandusky and Buckeye Central all with one loss. We have to take it one game at a time and can’t look ahead.”

Adachi led the Tigers with 13 points, while Bivens added 12 and Bowerman finished with 10.

“I am so happy with where those kids are now. If you would have seen us in our first three or four scrimmages, it’s like total night and day,” Vogt said about where his team is at this point of the season. “They’re all in, so I’m pretty proud of our progress for us to sitting at 9-3 right now considering where we started. I’ll take it.”