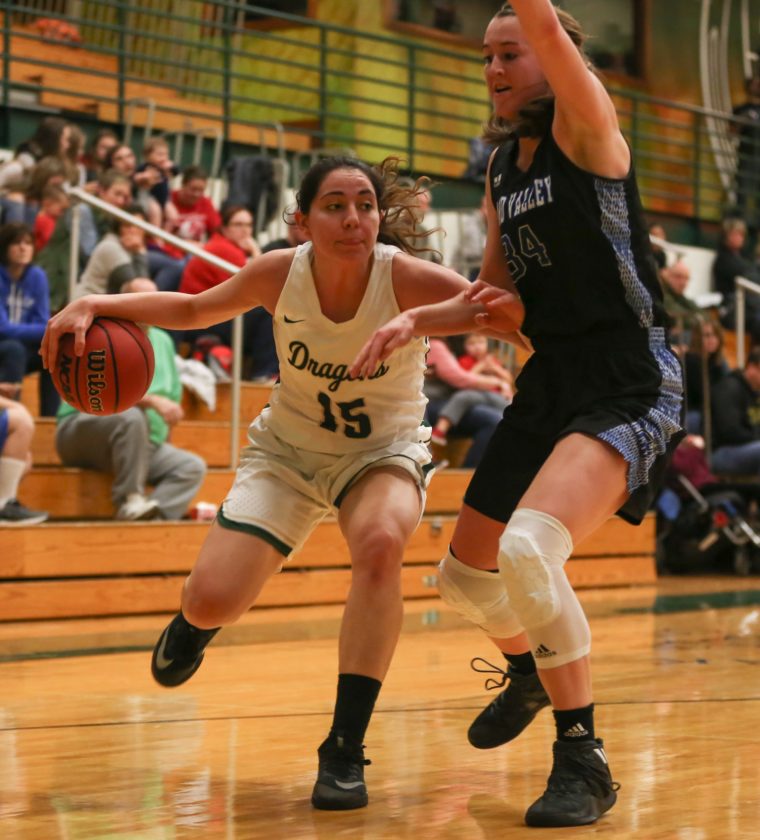 The Tiffin women’s basketball team struggled to score at the start and the end of the game as Grand Valley took home a 73-40 Great Lakes Intercollegiate Athletic Conference win Saturday.

The Lakers out-rebounded the Dragons 49-27 and held a 16-0 edge in second chance points.

The Lakers took control again in the third, out-scoring Tiffin 21-12 for a 53-33 lead. The downward spiral continued for TU in the final quarter. The Dragons shot just over 16 percent from the field.

Ali Shirmer had a game-high 17 points to lead Tiffin while Jensen Hiegel was the only other Dragons with double-digit scoring with 10 points.

not enough for Berg

Despite having game highs in scoring and rebounding, Madelyn Crawford’s double-double wasn’t enough to help Heidelberg against No. 22 Marietta.

The Pioneers powered past the Student Princes to a 83-52 Ohio Athletic Conference win Saturday.

Crawford’s double-double was her sixth this season, leading the Princes (4-11, 2-6 OAC) with 16 points and 10 rebounds. Brittanie Ulmer backed her with 12 points off four triples in the game.

HU started a little slow in the third, allowing the Pionners to push the lead back to 14. Back-to-back treys by Seneca East graduate Megan Siesel and Crawford cut the lead to eight. At the end of three, The ‘Berg trailed 54-47.

The fourth was not kind to the Princes as they sank just one field goal.

The Pioneers had a 47-32 rebounding edge with three player scoring in the double digits. Amisha Herd led Marietta with 15 points.

After holding the lead for much of the second half, the Tiffin men’s basketball team was unable to hold on as Great Lakes Intercollegiate Athletic Conference foe Grand Valley came back to take an 80-71 win.

The first half started with both teams trading buckets and playing physical ball. With just under 6 1/2 minutes left in the first half, Alex Brown hit a jumper to take a 23-21 lead for TU. The lead didn’t last long with the Grand Valley (8-8, 3-5 GLIAC) going on an 11-4 run to take a 32-27 lead with about two minutes left. The Dragons fought back to cut the halftime deficit to 36-34.

Tiffin (6-9, 2-6) took advantage of a porous perimeter defense, sinking 7 of 10 triples in the first half, hitting 40 percent from the field. The Lakers lived in the paint scoring 16 points on the inside and finished the half with a 61.5 field goal percentage.

When the second half started, the Dragons caught fire, using a 17-8 run to take a 51-44 lead with about 15 minutes left. The Lakers slowly chipped away at the TU lead and tied the game at 59 with under eight minutes remaining.

The Lakers tried to jump out to a big lead, but the Dragons continued to use the trey to keep the game close. Terrell Mabins sank a pair of free throws with 1:25 left in the game to tie the game at 71. That was the last time TU scored. The Lakers used a nine-point spurt in the time remaining to take the win.

Brown led TU with 21 points, three assists and six steals while Austin Schaub added 12 points and five rebounds. Justin Miller was the only other Dragon with double-digit points scoring 11. Austin Adams chipped in eight points and led with eight rebounds and three assists.

The Heidelberg men’s basketball team is still looking for a win in 2018 after falling 75-62 to No. 19 Ohio Athletic Conference foe Marietta Saturday.

The loss starts the Student Princes off with an 0-5 record for 2018 while pushing the overall record to 6-9 and 2-6 in OAC action.

The ‘Berg led 55-54 late in the game before the Pioneers used a 21-7 run in the final five minutes to close out the game and secure the win.

Marietta (12-3, 6-2) took an early 16-6 lead with Heidelberg’s only points coming from a pair of Bailey Croft triples. Kiere Bennie scored 14 of his 16 points — a team high — in the first half to help the Princes battle back. James Hanley sank a trey to give HU a 22-21 lead with six minutes left in the half.

Coming out of the halftime break tied at 30, the game remained close throughout the second half. With under six minutes left in the game Prince Benson scored five straight points to turn a 54-50 deficit to a 55-54 led. The lead was short-lived as Marietta’s Avery Williams converted a three-point play to spark the 21-7 game-ending run.

Benson finished with 15 points for The ‘Berg while grabbing seven boards. Davey Hipp tossed in eight points while Chris Moxley added seven from the bench.

INDIANAPOLIS — Both the Tiffin men’s and women’s swim and dive teams had many runner-up finishes at Indianapolis while the Greyhounds won every event.

With a dramatic pin at the 285-pound weight class, Tiffin’s Caleb Fry flattened Christian Boyles (McKendree) in 1:34. The pin gave the TU its third straight pin of the match. Hayden Bronne got it started at 184 with a pin in 2:40 against Ryan Vasbinder. At 187, Nicholas Mason pinned Luke Diener in 4:43.

AKRON — Bowling Green took a 32-24 lead going into the half, but Akron battled back in the third quarter to make the game much closer.

A late 3-pointer by Haley Puk gave Bowling Green (9-7, 1-4 Mid-American Conference) a 66-64 win over Akron. The senior sank the game-winning shot with 19.9 seconds left in the game to cap a fourth quarter rally.

The Falcons had the double-digit lead going into the half, but a 10-0 run by the Zips (6-10, 0-5) at the beginning of the third turned things around. Akron led by as much as 12 points early in the fourth.

The Falcons cut the deficit to seven with about three minutes remaining in the game before rallying to take a road win.