Junior finishes with a double-double in win 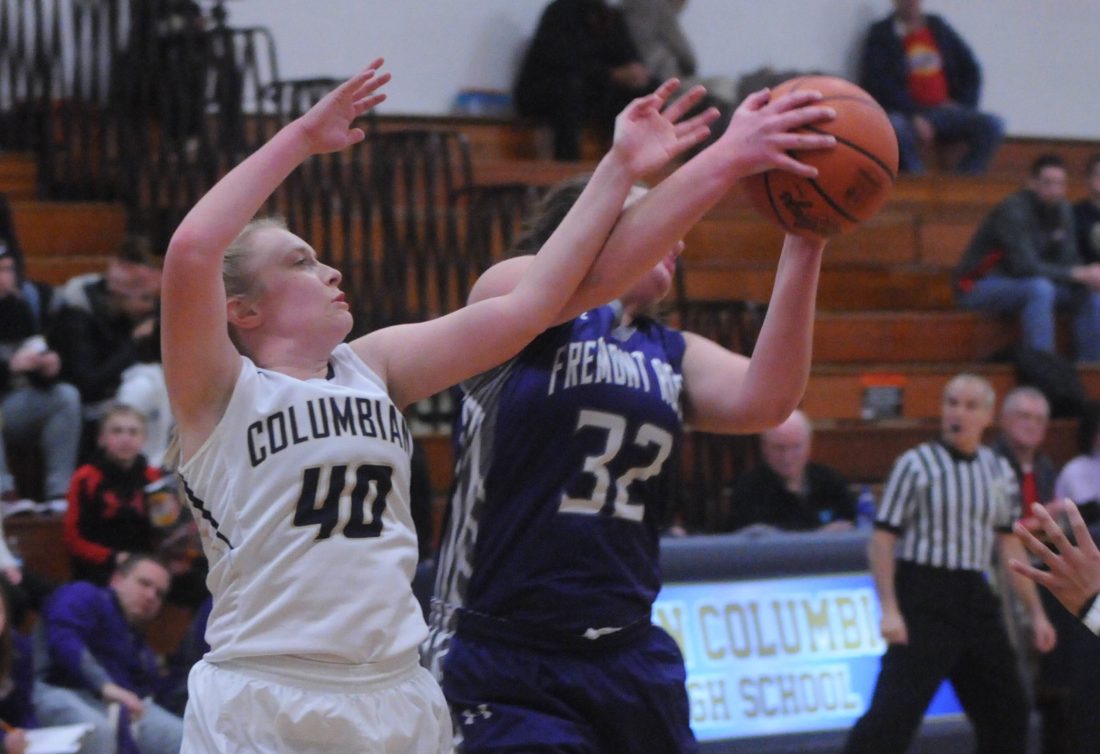 Columbian's Autumn Sehlhorst fights for a rebound against Fremont Ross' Marissa Overmyer during the first half of a basketball game on Tuesday, Jan 16, 2018. Jonathon Bird

Down two points and with 17 seconds left, Fremont Ross’ Jazmin Bulger drove toward the basket and attempted a potential game-tying shot.

It missed, and Columbian’s Abby Dryfuse grabbed the rebound — her 14th. She was immediately fouled. Nine seconds remained.

This was good and bad for the Tornadoes.

On one hand, Dryfuse was going to the foul line to potentially ice the game.

On the other, Columbian hasn’t exactly been a sure thing from the free throw line lately. 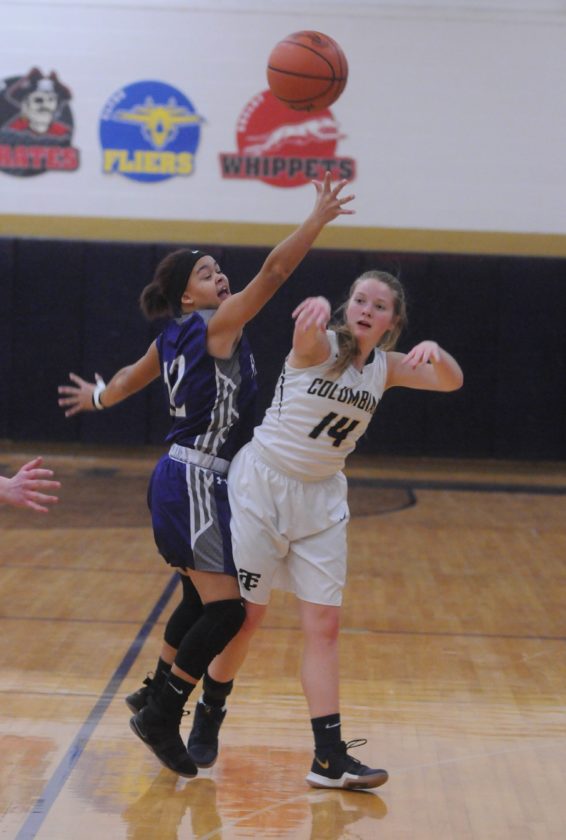 Columbian's Hannah Cooper sends a pass over the reach of Fremont Ross' Brayeln Horn during the first half of a basketball game on Tuesday, Jan 16, 2018. Jonathon Bird

The Tornadoes were just 16 of 33 from the stripe Tuesday.

“We spend so much time shooting free throws in practice,” Columbian coach Erin Reed said. “We get tired and then we shoot free throws.”

Dryfuse could be excused for feeling tired. She had battled in the paint all night, and had notched 15 points. She also hadn’t been on the floor most of the contest.

But the junior wasn’t thinking about that.

“I was just kind of listening to my teammates cheering me on,” Dryfuse said. “They were the ones who helped me make it.”

Dryfuse calmly drained both free throws. The Tornadoes went on to defeat the Little Giants 58-54.

Columbian (6-7) got big performances from its top three scorers. Maddie Brisendine finished with 16 points and seven rebounds. Kaia Woods finished with 14 points and eight boards, a number of which came in a tight fourth quarter.

“A couple things could have went differently toward the end there,” Reed said. “But Abby’s free throws, Hailey (Cooper)’s charge … a lot of girls contributed tonight to finishing that game.”

Cooper drew a key offensive foul late, while Autumn Sehlhorst was tough, finishing with five points and three assists despite foul trouble in the second half.

Columbian trailed Ross 15-11 after one quarter, due in part to Woods picking up two early fouls and leaving the game.

But Woods returned at the start of the second quarter, and immediately drained a 3. She managed to stay out of foul trouble the rest of the way. It helped to key a mammoth second quarter for the Tornadoes. They outscored the Giants 20-11 — at one point they led 29-19 — and went to the break up 31-26.

But Ross came back with a big third quarter. It was led by Bulger, who finished with 20 points, Ahlia Simms, who registered 11 points, and Marissa Overmyer, who had four points and eight rebounds. By the end of the third quarter, Ross led 46-43.

“The whole game was back and forth,” said Ross coach Juan Vela, whose team slipped to 9-5. “We had a 20-point quarter, they had a 20-point quarter. The girls battled well. It was just a matter of who can hit shots in the stretch, and who can take care of the ball. I thought we had some dumb turnovers, and a lot of our shots didn’t fall in.”

Each team had problems with turnovers; Columbian had 18, Ross 17.

Dryfuse was asked how big the win was.

“It’s great. It will help us get up and get our next game going,” Dryfuse said. “It’s just a big boost for us. It helps us a lot.”

Columbian next game will be at home, Thursday, in another non-conference game against Port Clinton.

Columbian’s Autumn Sehlhorst fights for a rebound against Fremont Ross’ Marissa Overmyer during the first half of a basketball game on Tuesday, Jan 16, 2018. Jonathon Bird

Columbian’s Hannah Cooper sends a pass over the reach of Fremont Ross’ Brayeln Horn during the first half of a basketball game on Tuesday, Jan 16, 2018. Jonathon Bird