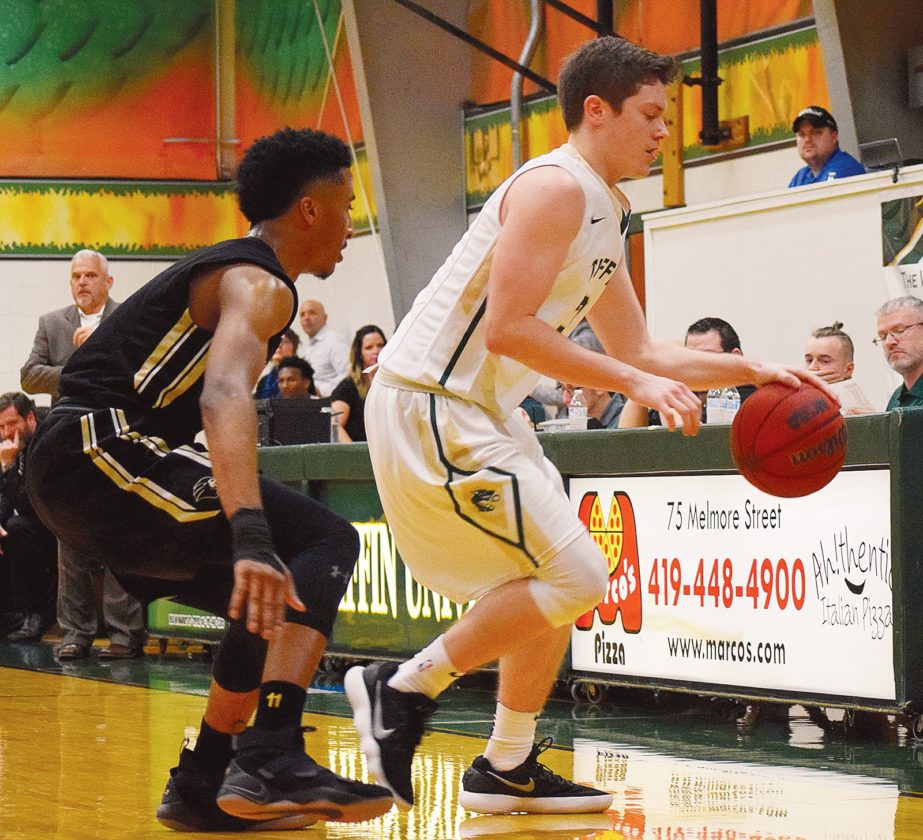 PHOTO BY JILL GOSCHE Tiffin University's Austin Schaub controls the ball against the defense of Purdue Northwest's Franklin Nunn during the game in Tiffin Thursday.

Tiffin looked lethargic. It played without energy and didn’t hit many shots. It also turned the ball over 19 times.

But that was in the first 34 minutes of the game with Purdue Northwest Thursday in Great Lakes Intercollegiate Athletic Conference play.

The last six minutes of the game, after the Pride built a 56-42 advantage, Tiffin ended the game on a 19-2 run to complete a miraculous 61-58 comeback win.

In the run, the Dragons forgot about their 2-3 zone and played an aggressive full-court press, which flustered the Pride into a few key turnovers.

“We talked at halftime that we need to somehow, some way get some energy, get some heart on the court,” TU coach Jerry Buccilla said. “Sometimes when you aren’t playing well, you don’t shoot the ball well, but that’s no excuse for not playing hard and not taking care of the basketball. We didn’t do either one of those things.

“I saw some spurts in the second half where I was saying if we could keep this thing within six, seven or eight points we could have a great spurt. We needed to get the tempo way up so we went from our soft pressing zone to a hard man-to-man press to get after it and that’s what sparked the guys. They fed off the energy and Purdue Northwest didn’t handle that well at all.”

Besides the change of defense for TU (6-9, 2-6 GLIAC), 6-foot-8 freshman Quentin Jones was a spark all game. He came off the bench and scored 10 points in the first half to keep the Dragons within seven at the half. He finished with 16 points and five rebounds.

“I feel like when you come off the bench you have provide something. My role tonight was to show that energy and to make shots,” Jones said. “I just felt good before the game and I told myself I had to make shots, rebound or do whatever I have to do so we could come out with a win.

“When we play teams and they are sticking me, they usually don’t know all what I can do, so they play off a little bit. That’s where those shots came tonight and they were wide open basically.”

Jones was the constant energy on the floor and even flipped over the assistant coaches on the bench fighting to keep a ball in play, which his teammates fed off.

“We said at the half, ‘Thank God for Quentin Jones,'” Buccilla said. “He kept us in it in that first half. He came in and hit some real nice shots and kept it close. He’s practiced very well this week. I’m a believer that you are going to play like you practice and we have a lot of young first-time guys on the court.

“For us coaches we might be 15 games in, but we are still trying to figure out some of these pieces and how to use them best and when they should be in. Guys that practice well have been getting minutes for us in that six, seven, eight position. He got minutes because he practiced very well and his energy was great.”

“Matt Bush (Purdue Northwest coach) has been there some years and he’s a damn good coach. You look at their record because this is their transition year (into Division II) with just one win, but they’ve played competitively against every good team in this conference,” Buccilla said. “If you look at the record as a player you could possibly go into the game overconfident and maybe that was part of it. I liked the outcome a lot, but I didn’t like the execution of the game at all.”