Coach Jeffers gets 700th win as Crusaders take down ’Berg 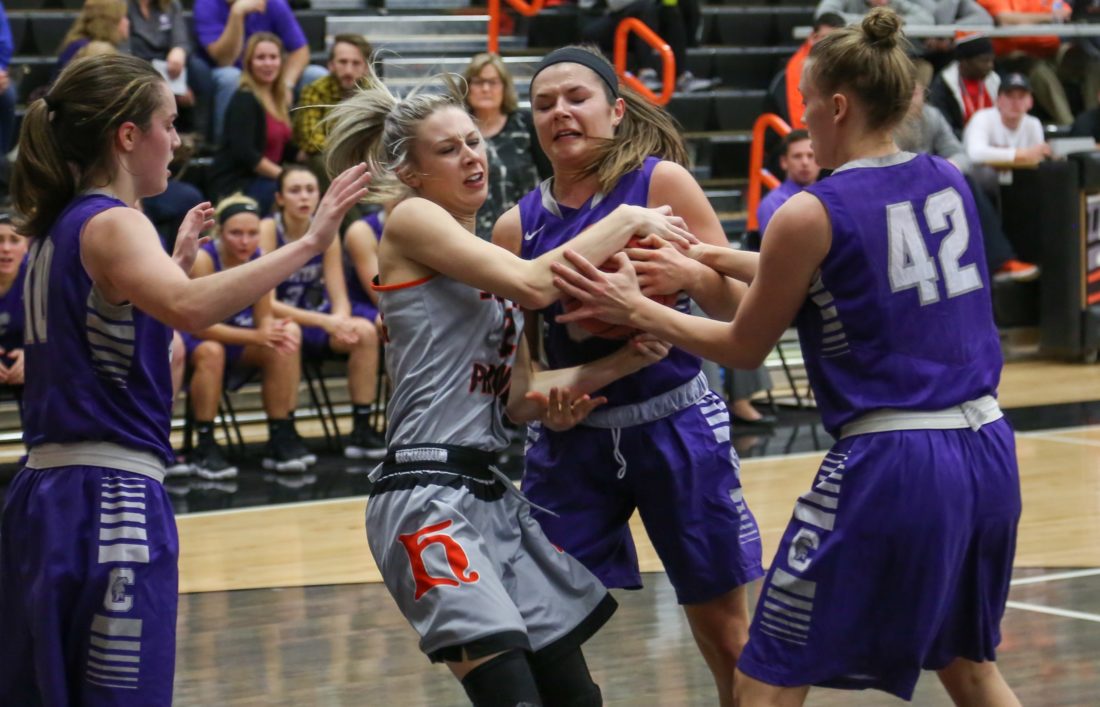 Heidelberg coach Morgan Harrigan knows her team can’t win when it gets out-rebounded the way it did by Capital Wednesday night.

To put it another way: The Student Princes are a drastically different team when Madelyn Crawford is not on the floor.

Crawford, a Willard graduate, scored 15 points and had 12 rebounds against Capital, but she was limited with foul trouble.

Meanwhile, the Crusaders dominated up front, winning the rebounding totals 47-32, and winning the game, 69-53.

“You can’t win a game when you lose rebounding by 15,” Harrigan said. “I was just explaining that to the girls, and that’s the biggest thing we have to learn from today.”

Regan Stonerock was a force for Capital, with 15 points and 14 rebounds. Four different Crusaders had at least five rebounds each.

“I thought our post kids did an incredible job,” said Capital coach Dixie Jeffers. “Actually, we were keying on them from the 3-point line because they shoot so many 3s. Our guards were really focused out there, and what they were doing defensively, really opened up the paint for us.”

The Crusaders led most of the way, outscoring the Student Princes 17-8 in the second quarter to take a 30-21 lead into the half.

But Heidelberg played its best in the third quarter, starting with a 13-4 run and tying the game at 39 on an Alyssa Riley 3 with 2:24 left in the quarter.

“In the third quarter, we picked up our defensive pressure, and then we were able to convert layups in transition, because we pushed the tempo and attacked the basket,” Harrigan said.

But Capital took control after that. It led the ‘Berg 45-41 after three, and then outscored the Princes 24-12 in the final quarter.

“In the huddle, I just said, ‘You’ve got to buckle down, now,'” Jeffers said of the conversation with her team between the third and fourth quarters, “‘Here’s what they’re gonna run, here’s what they’re looking for.’ So we finally stayed on the 3-point line, and started taking a cross cut, instead of letting them have that lane to come back. And then we boarded, and we ran, and we executed.”

Crawford also missed significant time in the fourth after picking up her fourth foul.

“When Maddy Crawford is on the floor, we’re a pretty good team,” Harrigan said. “When she’s off the floor, we struggle to have that person step up, because she’s been our most consistent player the entire season.”

The win was a milestone for Jeffers. It was her 700th as a college coach. She was presented the game ball by Heidelberg Athletic Director Matt Palm afterward.

“It never sinks in when you get a milestone,” Jeffers said. “I’m appreciative of the talent I’ve been able to coach at my 32 years at Capital. It’s not always been fun, but coaching this bunch this year has been a lot of fun.”