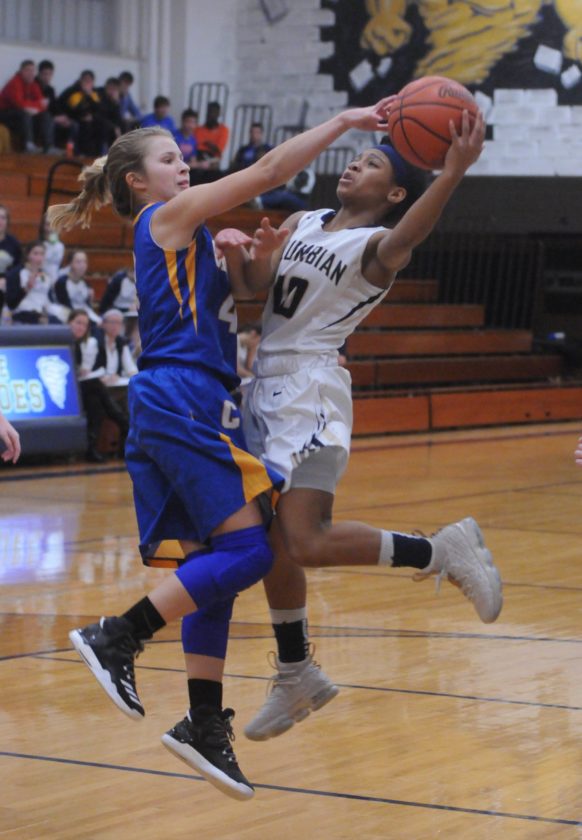 There were plenty of things that stood out after Clyde’s 51-33 win over Columbian in Tiffin Tuesday.

The Tornadoes came out at the start of the game and missed their first eight field goal attempts. Two of their top three scorers, Kaia Woods and Maddie Brisendine, were held scoreless in the first half.

Almost all of Columbian’s early offense was the result of Abby Dryfuse, and by the end of the game, the junior was responsible for most of the team’s production.

But after talking about a number of things, TC coach Erin Reed put it succinctly.

“Marshall,” she said, “made the difference.”

But she was also terrific on defense. Woods came into the game averaging more than 13 points. Marshall — the freshman’s primary defender — held her to just two points. Woods fouled out with five minutes to go.

“Our focus was her, and she’s a good basketball player,” Reed said. “We put who we thought could contain her (on defense), and it didn’t work. Sometimes that happens.”

Marshall got things going right away, scoring six first quarter points and pushing the Fliers out to a 13-2 lead. They led 13-6 after one.

“We always talk about coming out strong, and hopefully getting them down,” Marshall said, “so we can continue what we’re doing throughout the whole game, and we don’t have to change their gameplan as much.”

Marshall erupted in the second quarter for 12 more points, which accounted for all the Fliers’ scoring in the period. She had 18 at the break, and Clyde led 25-17.

Columbian wasn’t out of the game, and Dryfuse was the reason. With Woods held in check and Brisendine collecting a pair of early fouls, Dryfuse carried Columbian’s offense, scoring all but two of the team’s first-half points and adding 10 rebounds, seven of which were on offense and often led to stickbacks.

“She was definitely keeping us in the game; I can’t say enough about how she played tonight,” Reed said. “It wasn’t easy. They put — whenever she got the ball — they were like glue on her. She did a really nice job tonight. There’s nothing more she could have done.”

Dryfuse finished with 21 points and 19 rebounds. But she was the only Tornado who scored in double figures. Brisendine finished with six points on a pair of second-half 3s, and Mo Obringer, Woods, and Elizabeth Newland had two points each.

That was it. The Tornadoes came in averaging an SBC Lake-best 57.9 points a game, and had scored 75 points in its last contest — a win over Shelby.

“Thirty-three points, that doesn’t happen,” Reed said. “We just don’t do that. We score 70, 75, 67, so that’s not even something we worry about. So for that to happen tonight …when (scoring) doesn’t happen, it’s hard for us to get anything going.”

Only four players scored for Clyde. Alexis Keegan had 15 points and six rebounds, while Jackie Smith had four points and Alayna Barrera three.

While Marshall had the big statistical game, Clyde coach Dave Lozier said the win — which improved the Fliers to 7-6, 4-2 in the conference — was a team effort.

“The little things you don’t see,” Lozier said. “I only had four kids score, but Maddie Bannister I thought played outstanding defense up top in our zone, (Alayna) Barrera maintained the ball tonight, we didn’t have as many turnovers (8) as we did against Bellevue. Just the little things. If we do those things, we’re a pretty competitive basketball team.”

Marshall said it was big to pick up a conference road win.

“The new league is very hard, and every game is super important, and it’s always going to be a fight,” she said.

It was a game Marshall dominated Tuesday.

“Heidi’s been doing that for us all year,” Lozier said. “I told her on the way over, and I told her this weekend when we were doing a report on Tiffin, that I thought she could be aggressive and open the floor a little bit. I think early on, foul trouble got to Tiffin, and we were able to capitalize a little bit.”