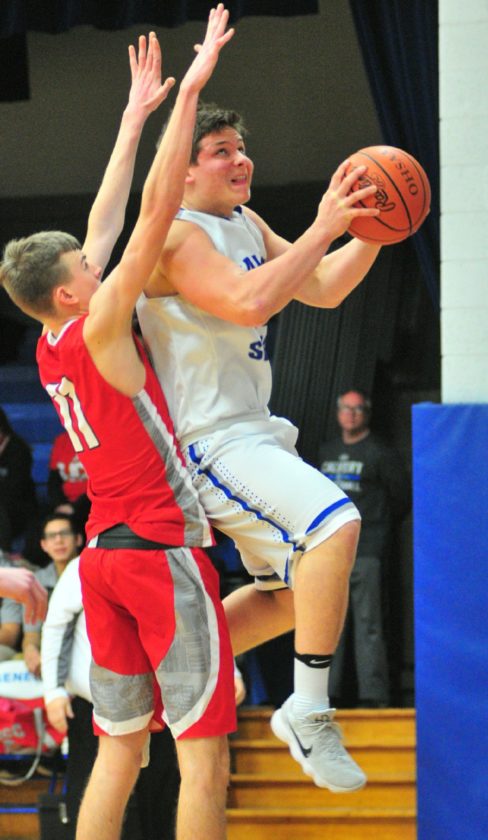 It was a tough way to go for Calvert Assistant Athletic Director Kim Zahner, charged with introducing the lineups with a microphone that was out.

That was a strain, but it wasn’t the only issue of the night. Head coach Jon Otterbacher was also out. And the final 2.4 seconds on the scoreboard clock, for whatever reason, would not run out.

But the one thing that went right for Calvert was big. The Senecas rallied to beat Fremont St. Joseph Central Catholic 42-39. In the process, they knocked the Streaks out of a four-way tie for first in the Sandusky Bay Conference River Division.

“Tonight was probably our best defensive game of the year,” interim coach Matt Wolph said after the Senecas improved to 5-6 overall and 2-4 in the River Division. “The last time they put some points up on us and beat us I think by maybe 15.”

Wolph was on duty because the Diocese of Toledo was awaiting paperwork necessary to certify Otterbacher as coach, according to Zahner. She said the school was notified regarding missing documentation Tuesday morning. She said it has been sent and the school is awaiting diocesan acknowledgment. 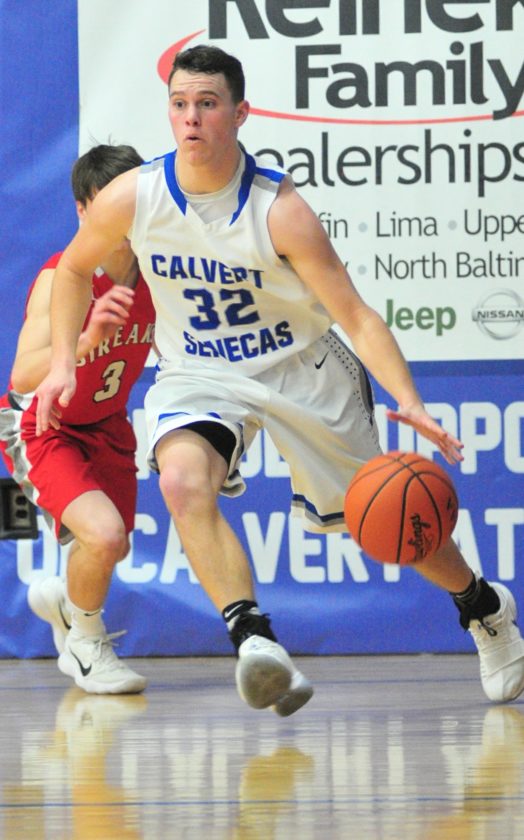 Calvert didn’t have the lead for long, but it had the upper hand when it mattered most. After Connor Kennedy hit two foul shots to the open the game’s scoring, St. Joseph countered with two free throws from Chase Harrison and a 3-pointer by Zachary Wonderly Jr. for a 5-2 edge. The Streaks maintained the lead until a little more than a minute-and-a-half to play.

St. Joseph twice had eight-point leads late in the second and third periods, but the Senecas closed the gap both times. Down 21-13 with 2:16 left in the half, Calvert scored the final five points to trim the margin to 21-18 at the break.

Another 3-pointer by Wonderly and inside scoring from Spencer and Chase Harrison helped St. Joseph to a 31-23 advantage late in the third. Spencer Harrison led the Streaks with 10 points while Chase Harrison and Wonderly each added eight.

But Park Hemminger, who led Calvert with 10 points, hit a buzzer-beating 3-pointer from the left corner to start a go-ahead rally.

“I really thought we did a nice job defensively, but we had a few key breakdowns,” St. Joseph coach Jonathan Will said. “We allowed a 3-pointer at the end of the third quarter when we’ve got an eight-point lead. And they get the ball to start the quarter and get a bucket (by JJ Dull) and now, instead of being up eight, it’s a three-point game in two quick possessions.”

Dull scored off a Hemminger pass and Kennedy, who finished with nine points, hit a 3-pointer to cut the lead to 35-33 with 3:47 to go.

Spencer Harrison scored for the Streaks, but Nic Somodi was fouled on a 3-point attempt and he hit all three free throws to make it 37-36 with 2:17 to play. Forty seconds later, the Senecas took the lead on Hemminger’s drive off a Kennedy pass.

“Right there at the end, when we took the lead, it was just execution,” Wolph said. “I like how we maintained our composure. We actually went through two sets.

“We ran one play and we didn’t get the look we wanted,” he said. “We went right into the next one. They stuck with it and got the layup there to go ahead.”

Two foul shots each by Josh Recker and Somodi, who finished with nine points, pushed the margin to 42-37 with 19 seconds left.

Chris Morrisette went to the line for three free throws with 2.4 seconds left for the Streaks (6-5, 3-2). He made the first two, then missed the third. Each of the Harrisons got off putback tries and the scoreboard still showed 2.4 seconds left. One of the officials then waved off play and declared an end to the game.

“I understood what he was saying,” Will said of the official’s explanation. “It’s not on them at the end; I’ve just never seen the time waved off like that. We had so many opportunities to close the game out at the end tonight and our lack of discipline at the end just killed us.”

It likely puts St. Joseph in a must-win position Friday at home against Sandusky St. Mary.

“That’s what I told the guys before the game,” Wolph said. “At this time, the way we’re sitting in the league standings, we don’t have a good shot at being at the top, but we have an opportunity coming back around on the schedule with some of these teams to upset some seasons and make it interesting toward the end of the year.”