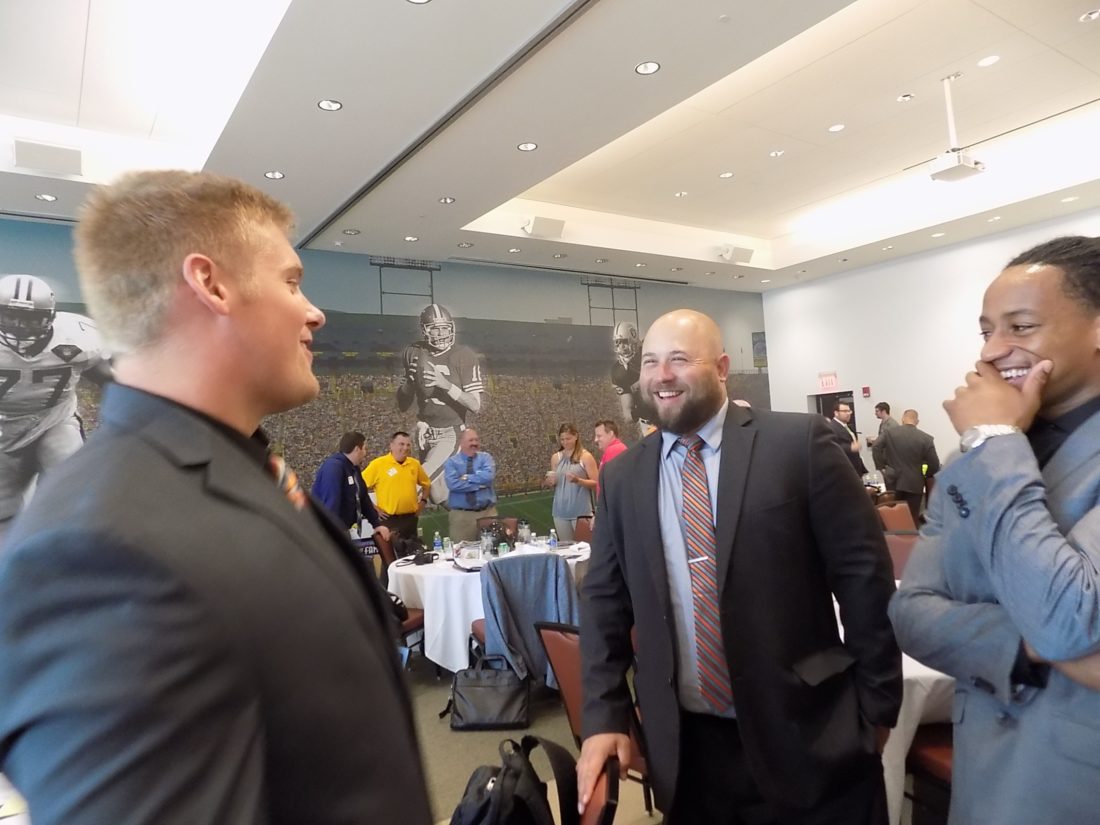 If there’s one eternal truth about preseason polls, it’s that no one seems to care about them.

Everyone says they don’t care.

For Heidelberg coach Scott Donaldson, about to enter his second season, the results of the media and coaches’ surveys taken at Thursday’s Ohio Athletic Conference media day at the Pro Football Hall of Fame likely are of no use.

After all, they’re pretty positive.

The Student Princes were picked third in the coaches’ poll and fourth in the media poll.

HU received one first-place vote in the media tally.

“You can use it as whatever,” Donaldson said. “You almost hope they vote you 10th, so you can put it up in the locker room.”

Heidelberg, though, has too much talent to have been picked last. It’s coming off a 6-4 season (6-3 OAC), and will be bringing back a number of key contributors from that squad.

Two were on hand Thursday.

Wide receiver Demetrius Magee is coming off a dazzling 2016 campaign in which he caught 53 passes for 633 yards and 11 touchdowns. He’ll be joined on offense by third-year starting quarterback Tyler Stoyle, do-everything back Cameron Vocke and another receiving threat, Tony Morris.

“We’re just ready to go, we’re just waiting for our opportunity,” said Magee, who was a D3football.com All-American last season.

The team’s defensive leader, Austin Crow, was also in Canton. Crow, who won All-American honors from d3football.com and the American Football Coaches Association last year, had a monstrous season, with 11 1/2 sacks and 29 1/2 tackles for a loss.

“Defensively, we know we can rely on our pass rush,” Donaldson said. “Whether we’re blitzing or not blitzing, those guys up front are savages.”

“That’s just four of them,” Donaldson said of his D-line corps. “We’ve got 10 of them who are probably going to play.”

But while Donaldson might think of Crow and as “savage,” the star lineman came across as very polite when asked about his expectations.

“I’m just hoping for more positivity on the field, and to make more plays,” Crow said. “I know we have a lot of guys coming back with a lot of skill. I know they’ve got my back, so I’m not to worried about it.”

Mount Union, which did not win the OAC title last year for the first time in about two decades, was picked first in the coaches and media polls. John Carroll was second in each, though the Blue Streaks — the defending champs — received to first-place votes in the coaches’ poll and nine in the media.

Ohio Northern was fourth in the coaches poll, and flip-flopped with HU for third in the media.

While Donaldson may have hoped to be picked 10th, that distinction went to Wilmington, which is being led by first year coach — and former Heidelberg assistant — Bryan Moore. The Quakers are 1-39 in their last 40 games.