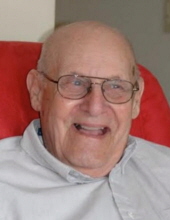 He was preceded in death by his parents, and he was the last surviving member of his immediate family that included one sister, Louise Elchert, and five brothers, Richard “Bud” Droll, Martin Droll, Donald Droll, Gerald “Dutch” Droll and Lawrence “Butch” Droll.

He graduated from St.Wendelin High School in 1943 and was a member of St. Wendelin Catholic Church. He was a World War II Navy veteran, serving June 1943 to December 1945 in the Pacific.

Emmett and his brothers operated Droll Brother’s Sohio in Fostoria for 30 years. He then worked as a custodian in Fostoria City school system until he retired.

He lived a simple life centered around hard work, doing the right thing and caring for his family. His legacy and life lessons will live on in the hearts of his grateful family and friends.

The family of Emmett Droll wishes to extend sincere thanks to the staff at Good Shepherd Home, Bridge Palliative and Hospice, the physicians and caregivers who watched over him and the friends and family members who visited through the years.

In lieu of flowers, memorial gifts can be directed to Bridge Palliative Care Hospice or Meals on Wheels.

Online expressions of sympathy may be made by visiting www.hoeningfuneralhome.com. Arrangements have been entrusted to Hoening & Son Funeral Home, 133 W. Tiffin St., Fostoria, OH 44830.