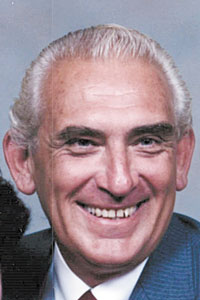 Renaldi retired as manager of Crop Production Services Inc. He worked more than 45 years in the agriculture fertilizer business. He received the Seneca County Agricultural Hall of Recognition award. He was a honorary member of Carey Future Farmers of America. He was an avid fan of the Ohio State Buckeyes, Cleveland Browns and Cleveland Cavaliers. He enjoyed doing yard work, repairing bicycles and driving the countryside, checking out crops and talking to the farmers. He loved watching his grandkids in their extracurricular activities and spending time with his family. He was a member of K of C No. 1925, New Riegel Moose, and VFW No. 3759 and American Legion No. 344 Aux, both in Carey. He was a member of The Basilica of Our Lady of Consolation where he helped with bingo and the parish festival.

The Mass of Christian burial will begin at 11 a.m. Friday, Aug. 17, 2018, at The Basilica of Our Lady of Consolation, Carey, with the Rev. Vince Petersen OFM Conv. officiating. Burial will follow in St. Mary’s Cemetery, Carey.

Online condolences may be sent to StombaughBatton.com.