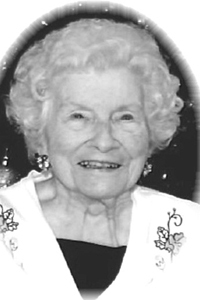 Verena Saad, 101, of North Olmsted and formerly of Tiffin, passed away at 10:03 p.m. Mother’s Day, Sunday, May 13, 2018. Verena died very peacefully, holding her oldest son Jim’s hand, in Joshua Tree Care Center, North Olmsted. Her daughter, Pat (Saad) Meterko and husband, Ray, who had been her primary caregivers over the past several years, were with her every day leading up to her death.

Verena was born Oct. 7, 1916, in Bowling Green, to Rolland and Inez Shade. They moved to Tiffin shortly after her birth. Verena met Carl Saad, a 1932 Tiffin Calvert graduate and varsity football player, on a blind date in 1935. They were married July 15, 1939, at St. Mary Catholic Church.

Verena survived two brothers, including James,, who died of leukemia, in Tiffin, at the age of 14 and she enjoyed a lifelong and close friendship with her other brother, Russell Shade of South Carolina, who passed away several years ago.

Verena graduated from Tiffin Columbian High School in 1934 as salutatorian of her graduating class. The night before graduation, Verena’s family received a call from the school principal, who informed her the valedictorian was extremely ill and would not be able to give the speech at commencement. Verena was shocked to learn that she would have to compose a new speech herself, overnight, to deliver to the entire school and parents the next evening. She did, she excelled and she received a standing ovation.

Verena and Carl raised five children, each of them graduates of St. Mary’s grade school and Calvert High School. She lived through World Wars I and II, the Great Depression, the Korean War, McCarthyism, Vietnam and the assassinations of JFK, MLK and RFK.

Life wasn’t always easy for Verena, who worked long hours for her family and kept a positive attitude. She often spoke of how, during the Depression, she would gather dandelion leaves in empty fields and alleyways to fry for dinner. Often, it was all they had to eat. In their small home on South Sandusky Street, they had limited means and raised their five children without a car, TV, radio, washer or dryer. But Verena and Carl made sure their family had clean clothes for school every day, food on the table and three newspapers a day.

Verena was an excellent writer and all five of her children learned from her and were writers themselves in one form or other, mostly in journalism. Verena’s heart was broken three times in the last several years, with the loss of her third son, John, to a rare form of leukemia in 2009. In 2016, Verena lost John’s wife and her dear daughter-in-law, Eileen, to cancer. Her husband, Carl, passed away in 2003. They were married for 64 years.

Verena and Carl were active citizens in our democracy, and they helped in the presidential campaigns of FDR in 1936, Harry Truman in 1948 and her beloved JFK in 1960. Even in her 90s, Verena did what she could to help Barack Obama in 2008 and 2012.

Verena and Carl’s sacrifices, and dedication to their children’s education, led to a total of 41 college degrees among their five children and spouses and their eight grandchildren and spouses, all emanating from that very humble household on South Sandusky Street.

Verena and Carl never ventured far from Tiffin, not having a car. But their adult children repaid them for their sacrifices by arranging interesting travel opportunities for them, on their own and often with family members. Verena loved visiting new places and they traveled all over the U.S.A., including many trips to California, Nevada, the Grand Canyon and Arizona. Their North American travel also included Florida, Washington, D.C., New York City, Canada, and the Bahamas. Verena had a warm spot in her heart for Michigan; especially, Detroit where she and Carl spent their honeymoon in 1939 and their 50th anniversary in 1989.

They enjoyed many trips to Las Vegas with Pat and Ray, even though they did not drink, smoke or gamble (other than occasional $1 slots.) It also gave them a chance to visit their youngest son, Jeff, a resident of Las Vegas. They loved traveling to Europe with their son Jim and his family, including France (Paris and the French Riviera), Monaco (Monte Carlo), Switzerland, Germany (including a cruise on the River Rhine), Belgium and Italy (Florence, Pisa and Venice). The family still enjoys watching videos of Verena climbing the Eiffel Tower in Paris and the Leaning Tower of Pisa.

Verena survived five major surgeries during her life. Following her last surgery, she moved from Tiffin several years ago to be closer to her daughter Pat in North Ridgeville, near Cleveland. She fought back from near death in four of those events. Pat (and Ray) spent many days of enjoyment with her over the last 10 years, along with many long hours of devoted and tireless caregiving – in their home, in the nursing home and in several middle-of-the night emergency room visits.

To send condolences go to www.traunerofuneralhome.com.