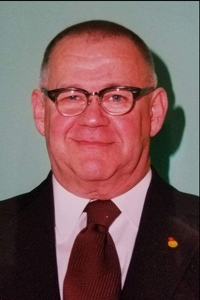 He was born June 13, 1929, in Upper Sandusky, to Vincent J. and Laura (Landversicht) Thiel. Mr. Thiel married Gladys E. (Morrison) Thiel and she died in 1992. He then married Diana Kent Thiel and she survives in Mansfield.

Mr. Thiel graduated from Upper Sandusky High School with the class of 1947. He was a veteran of the U.S. Army. Mr. Thiel was a mechanic at the former Stubbs Bros. Chrysler Cadillac, Upper Sandusky. He served as a volunteer fireman for over 40 years with the Upper Sandusky Volunteer Fire Department. Tom also was an active member of the Masonic fraternity in Upper Sandusky, a 64-year-member of Warpole Lodge No. 176 F&AM, serving as worshipful master in 1963, a member of McCutchen Chapter No. 96 R.A.M. and a member of Upper Sandusky Council No. 98 R&SM. For many years Thiel was on the advisory board, serving as its financial advisor for Upper Sandusky Chapter, Order of DeMolay. He also belonged to DeMolay Commandery No. 9, Knights Templar in Tiffin and Aladdin Shrine Temple in Columbus. He served on the Wyandot County Board of Elections for many years. Tom enjoyed Indy car racing and attending the Indy 500 each year.

His funeral will begin at 11 a.m. Thursday, at the funeral home with the Rev. Dennis Livingston officiating. Interment will follow at Old Mission Cemetery.

Memorial donations may be made to Upper Sandusky Volunteer Fire Department in care of the funeral home.

Visit www.BringmanClark.com to send a condolence or share a memory.