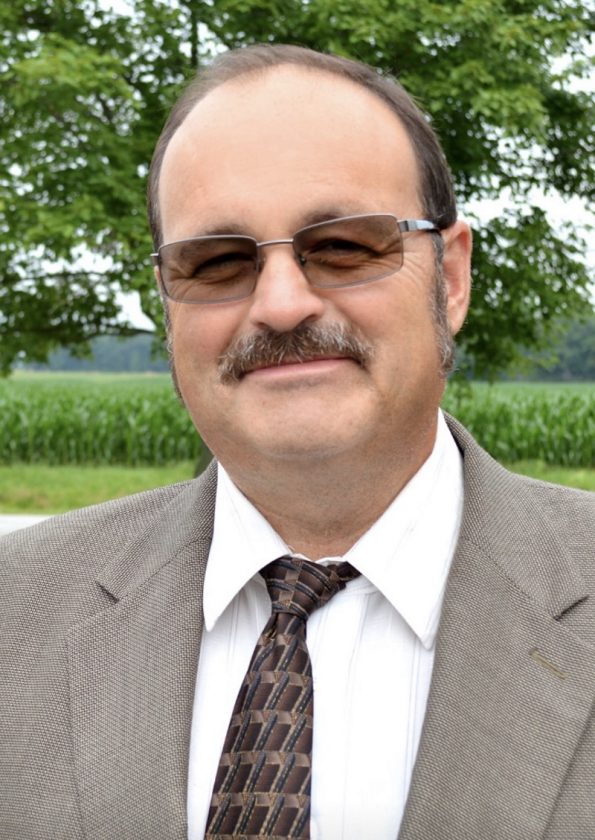 If he’s elected Seneca County Commissioner, Bill Frankart said he would use his 13 years of experience as a township trustee and his lifetime as a farmer to make good business decisions for the county.

Frankart’s name will be on the March 17 ballot running against Tyler Shuff.

Frankart, 49, said he has lived his entire life in Seneca County on the same farm where he born and raised. He is a 1989 graduate of Clyde High School and Vanguard Career Center. After graduation, he went straight to work as a full-time farmer on the family farm in partnership with his family.

He is in his fourth term as an Adams Township trustee. He has served on several county boards and on Seneca Regional Planning Commission as well as on the Seneca Conservation District board.

He and his wife, Janet, are 4-H advisers. They raised three children, and have always been community oriented, he said.

He and Janet owned the Corner Drive-Thru business in Green Springs until they recently sold it.

Frankart said owning businesses taught him the need to plan ahead and make sound decisions.

“When you’re a farmer, you’re fiscally responsible,” he said. He said he started learning to handle finances during his first 4-H project at 9 years old.

“I’m fiscally conservative with the township. I want to bring that to the county,” he said. “You can’t go overboard. You have to make the right decisions at the right times.”

If he’s elected, Frankart said he would stay in close touch with areas outside of Tiffin.

He said it’s important to maintain the current collaborative efforts between the county, city and townships.

“My goal is to continue on with that,” he said, “and to continue being fiscally responsible.”

He said the county’s Budget Stabilization Fund, which is money the current commissioners have set aside for “a rainy day,” is important to the county’s future.

He said he would like to continue to attract the best employees to the county by paying sufficient wages and benefits.

Frankart said operating a farm has its ups and downs.

“Nothing every stays rosy forever,” he said. “I want to help the county survive the tough times that might be coming down the pike for us.

“Any decision I make I have go home and look my kids in the eyes because they are our future,” he said. “I want to make things good for the next generation.”

Frankart said farmers will be learning about the new H2Ohio program and he wants to do what he can to influence state legislators not to over-regulate farmers.

“I want to help get money to work with farmers with the water situation,” he said, referring to finding the best methods of lessening the amount of nutrients that wash into streams and the Sandusky River, and eventually into Lake Erie.

Planning for the county’s future is important, he said.

“We want to be business-friendly,” he said. “But it’s a double-edged sword a little bit. You kind of want more factory-based businesses.

“You want to be more selective,” he said. “Both ends of the county have severe situations.”

At one is the landfill and the issues it has caused during the past year, he said, and at the other end is the problem of wind turbines.

“Whatever the issues are, you have to look at all sides and not make a political decision,” he said.

Decision should be fact based, he said.

“You have to do what’s best for your constituents,” he said.

For example, he said the trustees’ decision to hire an outside company to provide 24/7 emergency coverage in Adams Township was deemed the best option by the trustees, although not everyone agreed.

“We’ve listened to people and gotten input,” he said. “People need to have a voice and I want to be that guy who lets them.”

Frankart said he isn’t a politician and he doesn’t see the commissioners’ office as stepping stone.

He intends to continue working for Seneca County.

“That’s where I come from,” he said. “I want to keep a rural perspective.”