Tiffin University’s Diane Kidd Gallery, in partnership with the Diversity Celebrations Council, is to host an art exhibit featuring paintings of historical figures.

The gallery is to present an open reception from 6-7 p.m. Wednesday of the exhibition “Movers & Shakers,” paintings by artists Robert Vanitvelt. Vanitvelt will also give a talk from 5-6 p.m.

This exhibition, in celebration of Dr. Martin Luther King, Jr., is to run through Feb. 12.

“(Vanitvelt’s) subject matter for this exhibition depicts influential African American figures such as Martin Luther King, Jr., Rosa Parks, Harriet Tubman, Sojourner Truth, Frederick Douglass and Emmett Till among others,” Joseph Van Kerkhove, gallery director/curator, said. “The portraits of these historical figures are a tribute to the important accomplishments and contributions of many generations of African Americans.”

Vanitvelt is a self-taught artist from Flint, Michigan. He resides in Perrysburg and his work has been seen in several states, including Ohio, Florida, and California. He enjoys sewing, baking, sculpting, cutting stencils and painting.

“With the current temperature and tone I feel like a lot of that is fear-based, and we’re fearful of what we don’t know and what we don’t understand,” Vanitvelt said in a release provided by the university. “I’m giving people an opportunity to see it, be moved by it and show people that symbols and words do have power.”

Vanitvelt is to have painted the portraits of these historical figures while listening to his subjects’ actual interviews, speeches, music and novels. He spent four years studying the well-known figures and used house paint on canvas drop clothes to create the portraits as a way to bring the community together.

There will also be a live painting session from 11 a.m.-3 p.m. Feb. 5 in Gillmor Student Center.

For more information about this event or subject matter, email Joseph Van Kerkhove at vankerkhovejm@tiffin.edu. 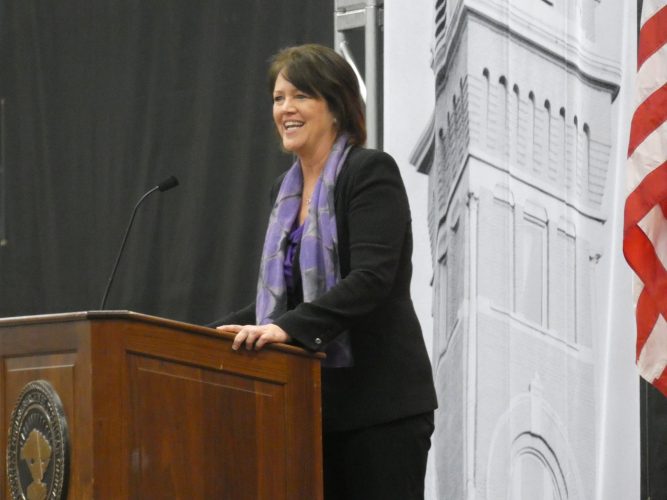