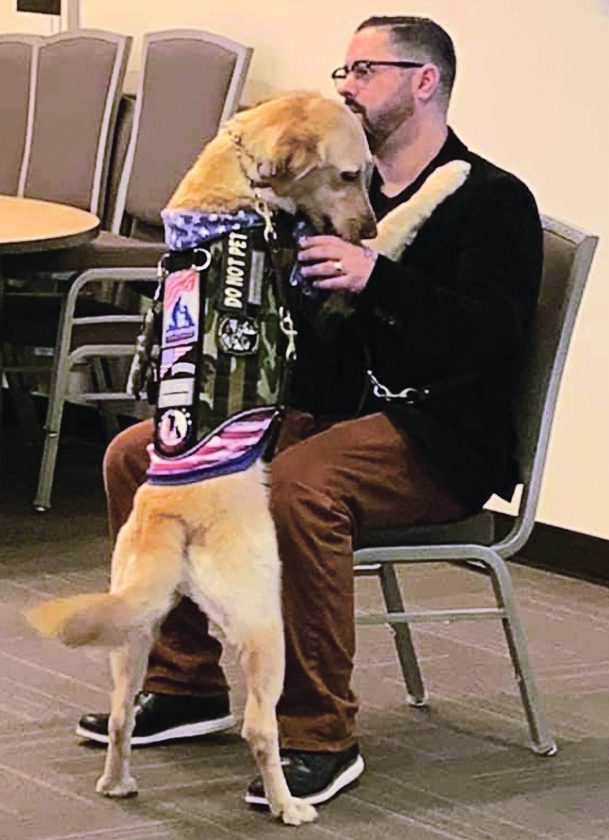 PHOTO SUBMITTED Capt. Louie Belluomini and his canine companion Star give a demonstration at PACCAR Medical Education Center, Chillicothe, in this December 2019 photo. The Fostoria Area Safety Council will host Capt. Belluomini, a K9s for Warriors graduate, and Star at the Feb. 19 meeting at the Fostoria Learning Center, 342 Perry St.

According to the 2019 Veteran Suicide Prevention Annual Report, an average of nearly 17 veterans die by suicide each day.

While there is no all-encompassing explanation for suicide, the report indicates that veterans who died by suicide are more likely to have sleep disorders, traumatic brain injuries or a pain diagnosis, as well as mental health diagnoses, such as depression.

K9s for Warriors — a non-profit program based in Ponte Vedra, Florida — connects service dogs with veterans suffering from things such as Post-Traumatic Stress Disorder from serving in the military.

The Fostoria Area Safety Council will host Capt. Louie Belluomini, a K9s for Warriors graduate, and his canine companion during the Feb. 19 meeting at the Fostoria Learning Center, 342 Perry St.

Belluomini’s program, “A New Leash on Life, the K9s for Warriors Story,” will outline his story and his journey to come to have Star, a K9 for Warriors.

Belluomini will also discuss symptoms of PTSD business leaders may recognize in members of their workforce, how to more effectively manage employees experiencing PTSD, the growing trend of service dogs in the workplace, accommodations an employer must make for a service dog and the employee’s responsibilities for their animal, how service dogs dramatically reduce dependence on medications and narcotics and raise awareness about veterans suffering from PTSD and the K9s for Warriors organization.

“We think this program has great value to not only our Safety Council but to the community as a whole,” Chamber/small business director Sarah Stephens-Krupp said. “Capt.Belluomini’s journey highlights the issues veterans face when returning from active duty, PTSD, employment and service animals as well as the K9s for Warriors organization. His program will help inform, educate and hopefully give people a better understanding and perspective of the physically invisible disorders and issues people deal with every day and the vital role service animals can serve.”

The meeting, which will take place from 11:30 a.m. to 1 p.m., is open to the public. Registration is required. Cost is $10 per person and includes lunch.

Register by calling the Fostoria Area Chamber of Commerce at 419-435-0486 or emailing Sarah@FostoriaChamber.com.

All Fostoria Area Safety Council members may send one representative at no cost.

Capt. Belluomini served in the Army for nine years as a psychological operations specialist and military police officer. He was honorably discharged as a Capt. in 2015 after serving tours in Iraq and Afghanistan. He suffered from PTSD and a traumatic brain injury after his deployments and had decided to pursue a treatment plan involving a K9 when medication and counseling failed or did not completely solve the issues.

Belluomini and Star were paired by K9s for Warriors, the largest K9/Veteran pairing organization in the United States.

“Capt. Belluomini and Star came highly recommended by the Ohio Bureau of Workers’ Compensation so I watched the ‘A New Leash on Life, the K9s for Warriors Story’ on Amazon Prime and I knew we needed to reach out to him to speak in our community,” Krupp said. “His story and the work K9s for Warriors does to support veterans is so impactful. I am very excited for this program as I have had the opportunity to speak to Capt. Belluomini and I am confident it will be a great program.”

According to the website, K9s for Warriors was founded by Shari Duval when their son, a veteran K9 police officer who served two tours in Iraq as a contractor for the Department of the Army as a bomb dog handler, returned home with PTSD.

“This really hit home to our family,” the website reads. “After two years of research on canine assistance for PTSD we decided the best way we could help these deserving warriors was to start a non-profit organization to train and give service canines to assist our warriors’ efforts to return to civilian life with dignity and independence.”

K9s for Warriors is dedicated to providing service canines to warriors suffering from PTSD, traumatic brain injury and/or military sexual trauma as a result of military service power-9/11.

Ninety percent of the dogs from the K9s for Warriors program are rescue dogs. As of December 2019, the organization has rescued 1,146 dogs and 596 warriors, including Belluomini and Star.

Star is Belluomini’s sidekick and is by his side every day, performing tasks for him that he cannot do on his own. She is a 4-year-old golden retriever who acts mostly as his bodyguard, protecting him from any possible threat that would normally startle him and cause him to react in a negative or threatened manner.

They have traveled all over Ohio and the United States sharing their story and spreading awareness and knowledge in their fight to see a better life for their fellow veterans as well as those with service animals and PTSD.

The Fostoria Area Safety Council will be collecting donations for K9s for Warriors at the meeting. K9’s for Warriors is a nonprofit organization that works completely from donations.

There is currently an 18-month waiting list for veterans. Dogs are on site and available but donations are needed to send veterans to the site for training. Donations go toward saving the life of a dog and a veteran.

“You literally are saving a dog from a kill shelter and a veteran from possible suicide,” Krupp said.

In addition, the council will collect items used at the K9s for Warriors facility, such as creamy peanut butter (unopened), large KONG chew toys, Nylabones, Jolly Balls (8″ hard plastic without handles), Petco or PetSmart gift cards and Magic Erasers; household items such as paper towel, toilet paper, plastic cups and utensils; and office supplies including copy paper and envelopes. Financial contributions will be accepted in cash or check form. Checks can be written to K9s for Warriors.

For more information on K9s for Warriors, visit www.k9sforwarriors.org/.