Hotel project to be named after Tiffin namesake 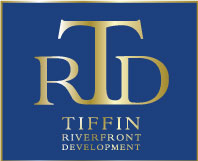 Tiffin RiverFront Development, LLC has announced the name of the new hotel — to be built on the Sandusky River — as the Edward Hotel & Spa.

“My vision for the hotel is creating a property that looks and feels as if it has been in historic downtown Tiffin for the past 100 years similar to the other buildings surrounding the hotel location,” Eduardo Hernando, project developer, said. “As I was reflecting on a name, I felt the most likely thing would be that a historic hotel would have a strong name and history behind it.”

After much discussion and research, Hernando said the name Edward Tiffin came up and as soon has he discovered the history, “anyone could see how easy this decision was to make,” he said.

“The Edward Hotel and Spa will be a special place and you will feel it the moment you walk in,” Hernando said.

The project is to be a 100-room hotel. The Tiffin RiverWalk Project received site plan approval on Nov. 19. The project includes 111 luxury residential condos, 63 rental apartments and the hotel location, which will include a 25,000 square foot convention center along with 5,000 square feet of meeting and event spaces to be used for business meetings and conferences, weddings and events.

The hotel is to also have a spa and rooftop bar/restaurant and pool.

According to Hernando, the next and final step is to go in front of the Architectural Board of Review to obtain approval on the exteriors of the buildings. All three buildings are to look and feel as if they were built decades ago and also following the similar exterior of the recently built Justice Center, he said.

The project’s ground-breaking is set for spring/summer 2020.

In addition, the River Walk will also have retail and commercial spaces available for outdoor dining and shopping along more than 1,100 linear feet of riverfront from one end to the other.