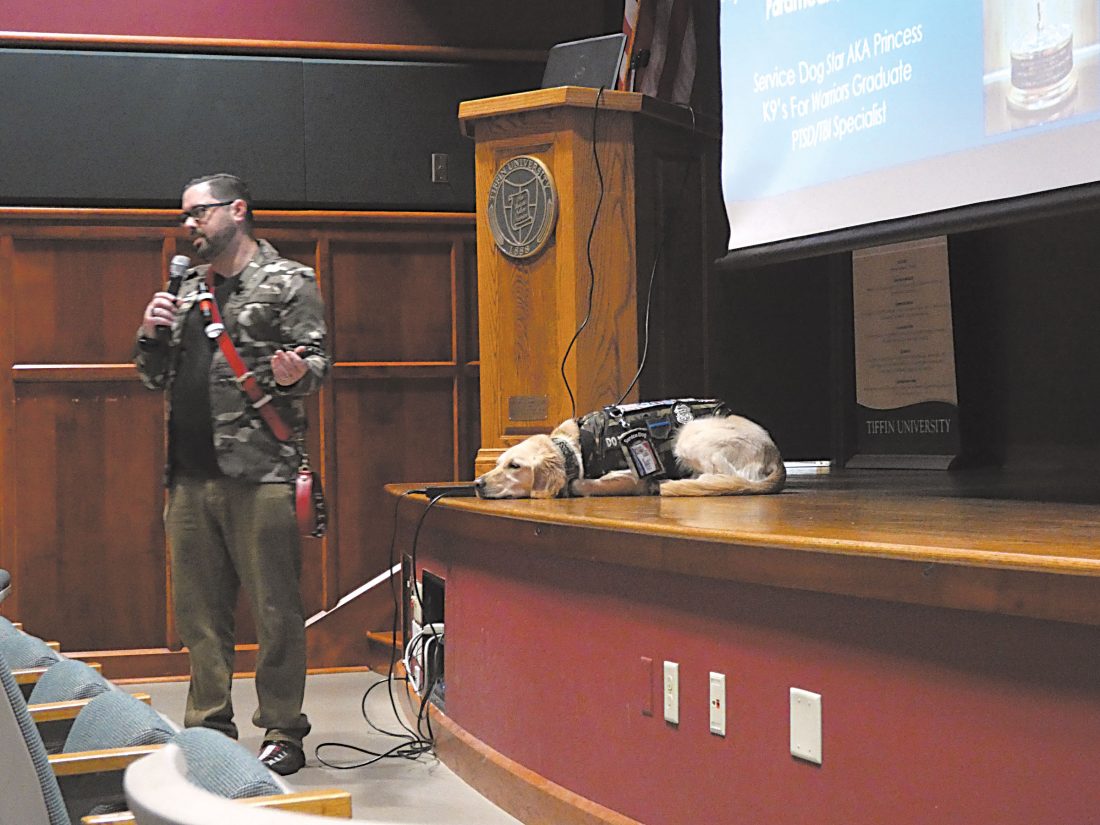 PHOTO BY NICOLE WALBY Louis Belluomini, along with his 4-year old service dog Star, discuss what PTSD is and looks like and ways to raise awareness Wednesday evening as part of an event at Tiffin University.

Louis Belluomini served in the Army for nine years and was honorably discharged as a captain in 2015 after serving tours in Iraq and Afghanistan. Belluomini suffered from post-traumatic stress disorder and traumatic brain injury after his deployments and decided to pursue a treatment plan involving a K9.

Belluomini and Star, a golden retriever, were paired by K9s for Warriors.

During his talk, Belluomini shared about when he came home from overseas. He was prescribed 18 medications at 23 years old.

Some of his symptoms included hyper-vigilance, anger, sleepwalking and even grabbing weapons at night.

What worked for him was Star, Belluomini said.

“Having her with me has worked more than any drug they gave me,” he said.

Belluomini and Star are side by side every day. Star works on the ambulance with him and is constantly attending to his needs. Star is the first dog in the country to actively work on an ambulance with her handler. She is cross-trained to track and search for people in case they have a lost victim they respond to.

Though medically retired, Hunt named this collection “One Soldier’s PTSD Story” as she is only one of the many soldiers and veterans suffering from post-traumatic stress disorder. Her experiences, traumas, coping mechanisms and daily struggles, though unique to her, are shared by varying degrees among those affected by combat-related PTSD.

“This body of work encompasses the previous two years, from active duty soldier to veteran,” Hunt said in a release provided by the university. “My journey isn’t pretty. My struggle is ongoing. Daily tasks remain a challenge. However, I keep fighting, assisted in large part by my K9s for Warriors service dog.”

Born in the United Kingdom, Hunt immigrated to the United States in 1989. She received a bachelor’s degree in foreign affairs from the University of Virginia after becoming a United States citizen in 2001, and enlisted in the U.S. Army.

Hunt was commissioned as a second lieutenant through the United States Army Officer Candidate School at Fort Benning, Georgia, in 2003. Following deployment to Iraq as the M2 .50-caliber gunner and communications officer on a military transition team, Hunt was selected to become a foreign area officer for the Middle East and North Africa, earning an associate’s degree in Arabic through the United States Army Defense Language Institute in 2012 and a master’s degree in International Public Policy (Strategic Studies) from the Johns Hopkins University School of Advanced International Studies in 2015.

Following reassignment and return to the United States after a final tour in the Middle East in 2017, Hunt was diagnosed with PTSD. Due to the severity of symptoms, she was reassigned to the Army Fort Belvoir’s Wounded Warrior Battalion in Virginia, attending 50 weeks of treatment through Fort Belvoir Community Hospital’s Co-Occurring Partial Hospitalization Program. It was here that Hunt began to allow recollections and reflections of long-repressed memories to emerge. Art became a mechanism to not only express but to cope with the memories of combat-related trauma.

Hunt was medically retired this year for PTSD, and she continues to struggle.

Her recovery is slow. However, Hunt’s daily life drastically improved after receiving a service dog from K9s for Warriors.