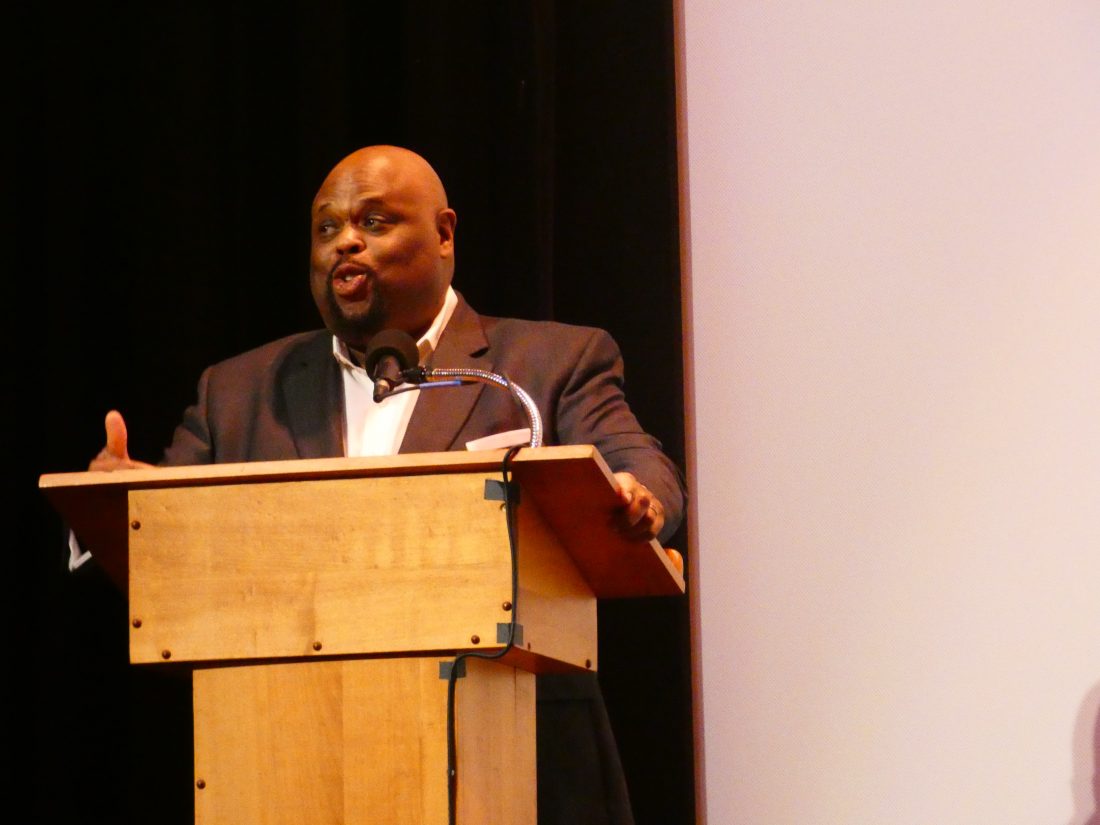 Rick Rigsby is pictured delivering his address Friday morning on the stage of The Ritz Theatre as part of the Opening Day event sponsored by the North Central Educational Service Center.

Speaker Rick Rigsby gave teachers and administrators advice to continue to grow and make an impact on children this next school year.

To be able to have the privilege to touch the lives of young people is a very serious calling, Rigsby said.

“To impact the lives of young folk, you must continue to grow,” he said.

“You can’t be distracted by your past success,” he said. “You have to grow and challenge yourself everyday.”

Rigsby said he was impacted and continues to impact his children and others from the lessons he’s learned from his father, a third grade dropout.

“The wisest person I’ve ever met is a third grade dropout,” he said.

His father dropped out in the third grade to help on his family’s farm. He taught himself to read and write and over the years as a line cook for a military academy, he learned portions of many languages and life experiences.

The lessons he’s learned include, don’t judge others, have common sense, be kind, live a life of excellence, have a servant’s towel bigger than your ego, be early and keep standing — don’t quit.

“Your goal is to make an impact, not an impression,” Rigsby said.

As a teacher, Rigsby said he learned to bring a boring subject to life and give the students under his direction a reason to listen.

“If you are not connecting with your students, you have to then adjust,” he said.

Rigsby is a former award-winning journalist. He also served as a college professor and character coach and chaplain for the Aggies football team at Texas A&M University.

Rigsby was named twice as an outstanding professor in the College of Liberal Arts at Texas A&M. He also has numerous publications, including the author of — “Lessons from a Third Grade Dropout,” and “Afraid to Hope.”