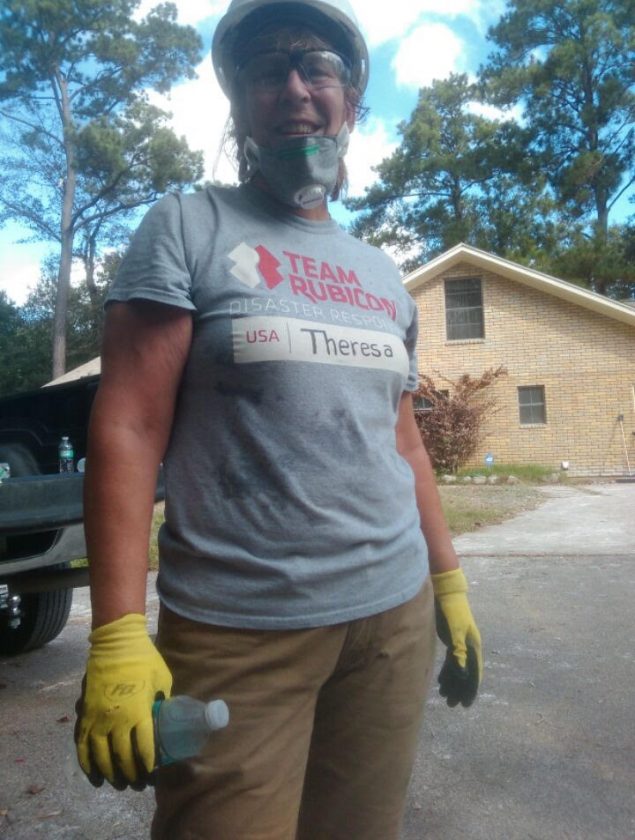 Theresa Scherger, a medical social worker at Bridge Home Health & Hospice in Findlay who lives outside Tiffin, has no problem filling her spare time.

Scherger has volunteered for Team Rubicon, an international nonprofit disaster response organization made up of armed forces veterans and civilians, since 2010.

And through Team Rubicon’s partnership with LivingWorks’ ASIST program, which specializes in suicide prevention and first-aid training, Scherger had the opportunity to learn to become an ASIST instructor and took it in 2017.

“Team Rubicon asked me if I wanted to go to training to become an ASIST instructor and paid for me to go, which means that I can now facilitate suicide intervention workshops,” Scherger said.

Scherger has been chosen to co-facilitate one of

28 simultaneous ASIST training workshops happening across the country Sept.5-6 in partnership with the Wounded Warrior Project, who is presenting the workshops on the cusp of National Suicide Prevention Week this year.

“The Wounded Warrior Project partnered with Team Rubicon and hosted 18 simultaneous training workshops at their local offices throughout the country last year, and given that it was a first-time undertaking, I think they were very successful classes,” Scherger said.

“I feel fortunate to be a part of this event,” she said. “I’ve flown to Tampa Bay and Buffalo in the past to teach these workshops, and when they asked me to co-facilitate the Chicago workshop this year I said definitely.”

According to a release from LivingWorks, the company who developed the ASIST program, ASIST is a two-day interactive workshop in suicide first-aid that teaches participants to recognize when someone may be at risk of suicide. The two-day training also teachers people to work with those at risk and to create a plan that can support their immediate safety, the release states.

“The best thing is that you don’t need a degree to do it,” Scherger said. “We’re not fixing anyone, we’re just helping them get through the next minute,” she said.

“In those workshops, we’re providing people the tools to be able to ask the important questions, because people are very hesitant to ask those questions,” she said.

Scherger’s involvement in Team Rubicon led her down the path to becoming an ASIST instructor in 2017.

She said she first decided to volunteer with Team Rubicon after seeing them return from a disaster relief mission in Haiti in 2010.

“They sounded like a really interesting group,” she said. “And when I got involved, I knew this was an awesome organization passionate about helping others.

Being the “proud daughter of a Korean War veteran, sister of a retired Army Master Sergeant and mother of an active duty airman” also endeared her to veteran-led Team Rubicon’s mission of involving military veterans as well as civilians.

“Since most volunteers with Team Rubicon have a military background, they tend to be very organized,” she said. “And they’re a very legitimate organization.”

Team Rubicon is an international nonprofit disaster response organization made up of military veterans as well as civilians that connects with local first responders during disasters, according to the organization’s website. The organization currently claims more than 20,000 volunteers able to deploy throughout the United States, and the relief efforts they offer are free of charge to the communities they deploy in, the website states.

“I volunteer to muck out houses and clean up debris after tornadoes, hurricanes and other national disasters,” Scherger said of her volunteering efforts with Team Rubicon.

“I am also a sawyer, which means I can run a chainsaw and cut up felled trees, a major part of disaster relief,” she said.

Scherger has gone on “ops,” as fellow volunteers refer to them, in Gatlinburg, Tennessee during the 2016 wildfires and in Texas to help after Hurricane Harvey in 2017.

It was during her first op in Gatlinburg that she understood the effects that her volunteer efforts with Team Rubicon could have on the people she wished to help.

“I was blown away by the devastation at first,” she said. “I asked myself, ‘what can we do to help these people?’ For many of them, their houses were no longer even there,” she said.

“The first home we came to was just ash, so we were attempting to sift through the ash for the family’s valuables while the family told us where the rooms had been that contained their important things,” she said. “They seemed most concerned about getting their mother’s wedding ring, which they had taken home from her room in the nursing home because they thought it would be safe.”

“The next morning, coincidentally, I got to go back to the same house where they were trying to find the wedding ring. And in just 45 minutes that day, we found their mother’s wedding ring in the ash,” she said.

Scherger has also performed smaller-scale “ops” with Team Rubicon, such as helping clear urban blight in Detroit and sending care packages to deployed troops with the help of the American Red Cross.

There have even been opportunities for Scherger to help out locally with Team Rubicon, like the times she installed smoke detectors in people’s homes in North Baltimore and worked with Findlay flood relief efforts.

“We call ourselves “grayshirts” because we get a gray t-shirt to wear after we provide some service through the Team and we all wear the same one,” she said. “One of the things I love about this organization is that once you become a grayshirt, you’re no different than anyone else in the organization.”

Asked why she enjoys volunteering so much of her free time to efforts like Team Rubicon’s ops and facilitating ASIST workshops, Scherger said the work she’s able to do through these organizations is too effective to pass up the opportunity.

“I love being a medical social worker, but I do have to follow medical insurance and Medicare guidelines in my profession,” she said. “Working with Team Rubicon, I’m physically helping people, pretty much on their worst day.

“My kids ask me why I take vacation days to do this, and I tell them it’s worth it,” she said. “When Team Rubicon gets invited to a city, not only are we able to help people at no cost to them, FEMA and emergency organizations also pay the cities and local areas the money they’d otherwise use to hire people to do the volunteer work we do.”