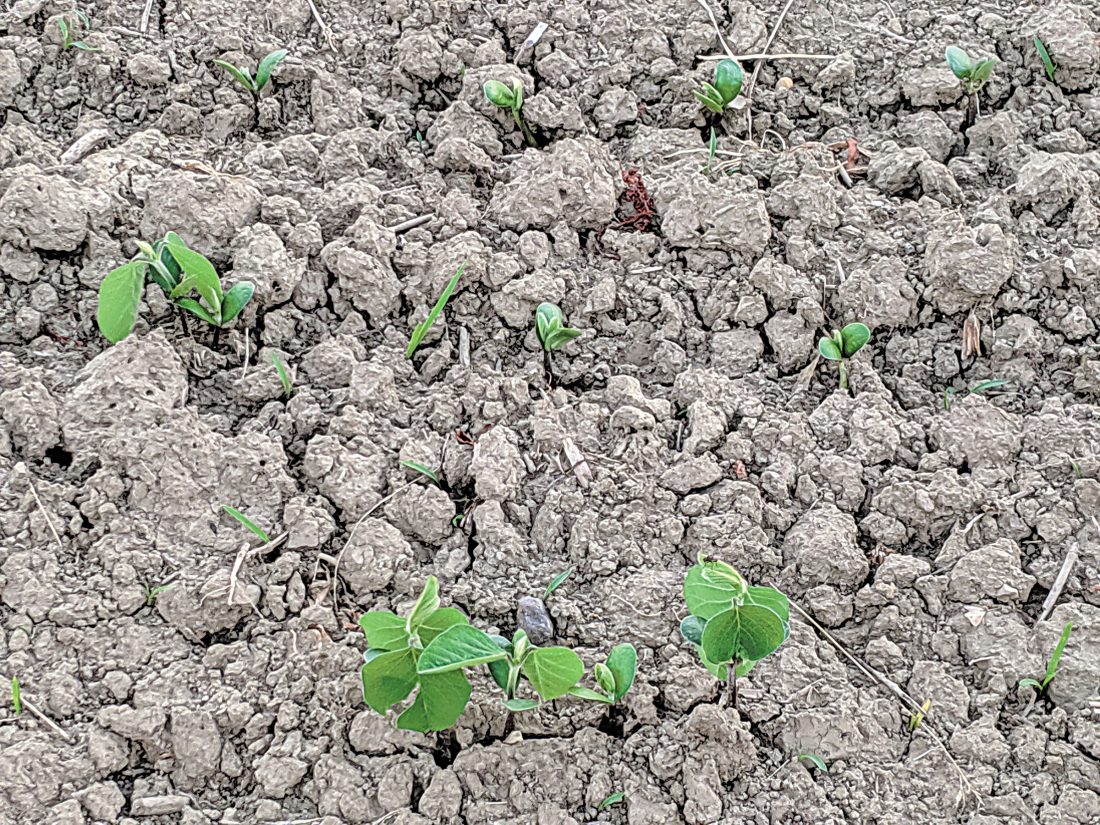 PHOTO BY VICKI JOHNSON Seneca County cropland is seeing late-emerging soybeans and virtually no corn this season due to heavy rains this spring and early summer that prevented many farmers from planting until last week. Many fields look like this instead of the lush green usually seen at this time of year. f luch and gr fields such as this one are struggling to produce late-planted crops this year, and

COLUMBUS — Farmers prevented from planting a cash crop due to unrelenting rain can sow a cover crop and still be eligible to receive federal trade assistance.

The aid is in addition to crop insurance payments on those acres.

The change in policy on cover crops the U.S. Department of Agriculture made July 1 is one of several allowances the agency has made in recent weeks to assist farmers in the Midwest, where persistent rain has delayed or prevented many growers from planting cash crops.

The funds for trade assistance on cover crop acreage are to come through the Market Facilitation Program, aid for farmers that was created to help offset growers’ losses as a result of the recent, international tariffs on U.S. goods.

Many Midwestern farmers unable to plant soybeans and corn in time to get decent yields are instead filing insurance claims and planting alternative crops primarily to protect the topsoil or to feed their livestock.

“There isn’t much,” he said. “People have grabbed up what was out there.”

A lot of farmers across the Midwest will be planting cover crops, some for the first time this year, Watters said.

A cover crop, such as cereal rye or oats, can hold in place valuable topsoil, reduce weeds in a field and add crucial organic matter to a field.

Besides qualifying for federal trade assistance, farmers who plant cover crops can collect crop insurance on acreage that had been intended for a cash crop. But farmers have to follow USDA stipulations.

Given delayed and prevented planting across the Midwest, the USDA recently adjusted some rules to help farmers, particularly those in need of hay for livestock at a time when hay levels are severely low in the Midwest.

Regardless of which cover crop a farmer selects for a field, the grower cannot harvest that crop for grain and sell it in the marketplace to collect crop insurance for those acres. However, this year, starting Sept. 1, the USDA is allowing farmers to use their cover crop for grazing, to harvest it as hay, or to chop the entire plant and feed it to their livestock.

Midwestern farmers also are being allowed to plant corn as a cover crop, provided the entire plant is chopped for livestock feed rather than the ears being harvested and sold as grain. Growers also will need to follow cover crop recommendations on seeding rate and row width.

Corn is expensive to grow compared to, say, oats, but it’s also a good fortifying food for livestock, Watters said.

Additional aid to Ohio farmers could come if the USDA declares the entire state, or portions of it, a disaster area. The state experienced the wettest yearlong period on record from June 2018 to May 2019, which has left soils persistently wet and unable to be worked.

June 14, Gov. Mike DeWine asked the USDA to designate the entire state a disaster area, given that excessive rainfall has hindered or prevented planting in many areas. Even farmers who were able to plant, if they did so later in the grower season, risk getting significantly lower yields on their crop.

Growers in areas that U.S. Secretary of Agriculture Sonny Perdue declares disasters could qualify for low-interest loans. They also could get higher returns on crop insurance claims for acreage where they could not plant a cash crop, said Ben Brown, a CFAES assistant professor and the program manager of CFAES’ Farm Management Program.

The disaster declaration will not likely be given to the entire state, but will more likely be declared only in northwest Ohio, which has experienced the heaviest rainfall and the greatest delays and prevented planting, Brown said.

If the disaster declaration is made for any part of the state, that will help, but how much that will assist farmers in staying afloat is uncertain, he said.

Without the disaster declaration, “profit margins, which are already razor-thin, will be squeezed even further,” Brown said.

For more information about how to plant corn as a cover crop to meet the qualification in Ohio, see go.osu.edu/corncover.

Producers without crop insurance or Noninsured Crop Disaster Assistance Program coverage in certain counties – including Seneca and most of northwest Ohio as well as other parts of the state – now have until July 15 to report acres they intended to plant this spring but could not due to weather conditions.

“Producers need to report prevented plant acres to retain eligibility for FSA program benefits,” Leonard Hubert, state executive director said. “In many areas of the state, excessive moisture has made it challenging for producers to get into their fields to plant and this deadline extension provides reporting flexibility.”

However, the extension does not apply to crops covered by FSA’s Noninsured Crop Disaster Assistance Program. Producers should check with their local FSA office regarding prevented plant provisions for NAP-covered crops.

Producers are encouraged to contact their local FSA office as soon as possible to make an appointment to report prevented plant acres and submit their spring crop acreage report. Locally, call (419) 447-7071.