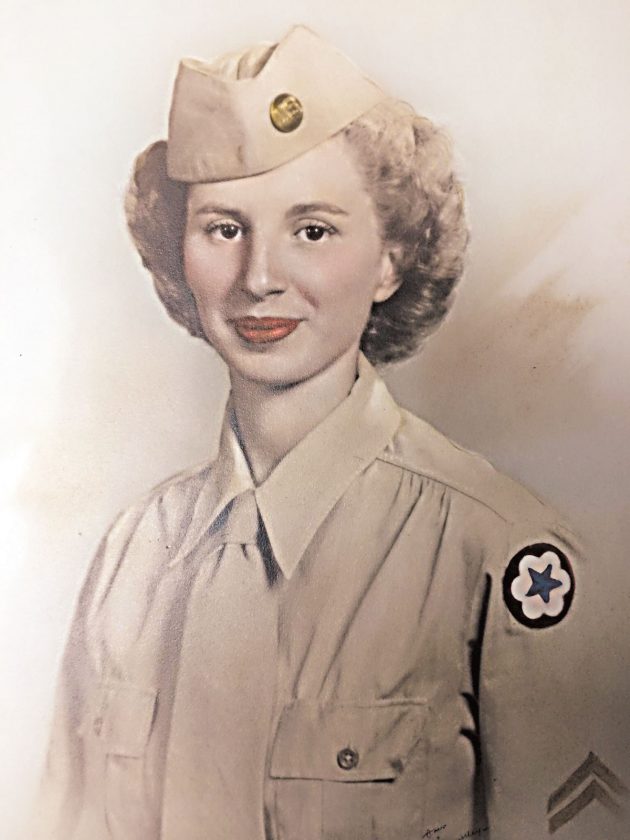 PHOTO SUBMITTED Dorothy Staib is pictured in uniform in 1943. The second photos is her at Good Shepherd Home in 2018.

A woman who was likely one of the first few hundred women in the military in World War II turns 100 today.

Dorothy served from 1943 to 1945 and she said she spent about two years in Norfolk, Virginia.

Dorothy’s son, Dave, said his mom started out in the secretarial pool but not for long. Once they saw she had previous experience in government, they moved her into where they were copying code off papers into a book on the base, he said.

“They bused us to church and we’d go to the beach for lunch and spend the afternoon,” Dorothy said. “Sometimes we’d stay for supper.”

Dave said she liked all the different kinds of people she worked with and there were people from all over the country. She got along with everybody, he said.

Dorothy said the best part about her job was the people. She and three girls stayed in contact over the years, attending each other’s weddings and sending Christmas cards to one another, she said.

“It was a good experience and service to go into. Everybody was nice,” Dorothy said.

“Back then that’s what you did,” Dave added. “For the type of war that it was, everyone just went into the service.”

“It has been a service family,” Dave said.

The family said Dorothy was “one of the pioneers for women” because she was probably one of the first few hundred women in the military. Dave said Dorothy was also a charter member of the Women in Military Service for America Memorial in Washington D.C. and her name is on the memorial there.

Dorothy was born in Tiffin and attended St. Joseph’s School until her family moved to Lancaster when she was 8 years old, Elaine said. She said Dorothy graduated from St. Mary’s Catholic Schools in Lancaster in 1937. Dorothy said her Dad’s mom was her favorite person and she stayed at her house as often as she could.

Information from the family states that after high school, Dorothy worked at the Elk’s Club where she assisted with parties and special events and she made about 50 cents a night doing so.

Dorothy said she married her husband Les in 1949 and had four children together. She said she “enjoyed her marriage” and they were together for 40 years, until he passed away. Dorothy said she then had to take care of herself and was alone by herself since then. Elaine said she lived in the house her husband built until just a few years ago.

“She is a very strong lady,” Elaine said.

She said Dorothy enjoys beer and is allowed to have one a day if she wants to. When asked if her family had beer with their meals, Dorothy said, “We were German, of course we had beer.”

Dorothy said if she had been asked if she had thought she would live this long she would have said no, adding “that’s about all there is to it.” Elaine said Dorothy wasn’t one to catch colds or get sick and she thinks being a hard-worker and faithful catholic has attributed to her longevity.

Dorothy said she never missed mass and they instilled that in her at school.

“My mother was a convert to (Catholicism) and she said, ‘you guys better be good or else,’ but she wasn’t mean or anything when it came to church,” she said.

“No way,” Dorothy said. “They’re living differently than I ever did.”