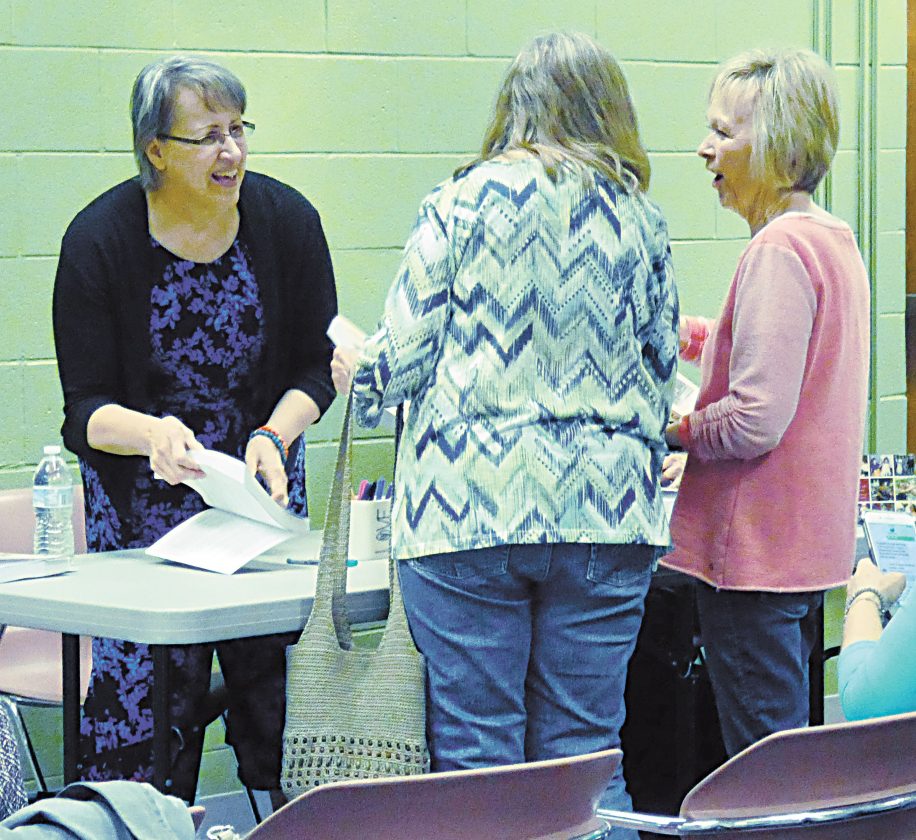 PHOTO BY NICOLE WALBY Author Cindy Kolbe is pictured signing books at a book discussion and signing Tuesday at the Tiffin-Seneca Public Library.

A former Tiffin native has recently announced the publishing of her memoir about a night that changed her and her family’s life.

Cindy Kolbe is the author of the book “Struggling with Serendipity,” a memoir about an accident that occurred in May 2000.

The memoir tells the story of when Kolbe and her two daughters were driving home from her son’s OSU concert. Kolbe fell asleep at the wheel, with the car flipping three times across a dark field. Kolbe’s youngest daughter, Beth, was in the passenger seat and the accident resulted in her spinal cord ripping, leaving the 14-year old paralyzed from the chest down.

Kolbe said when her daughter was told of her paralysis, she responded with, “Let’s talk about what I can do, not what I can’t do.”

As part of Kolbe’s coast-to-coast tour, she spent time talking about the book and signing books Tuesday at Tiffin-Seneca Public Library.

Kolbe and her husband, John, spent 30 years in Tiffin. There was an outpouring of love and support from the Tiffin community, she said.

She worked at Tiffin Developmental Center and John taught in the Tiffin public school system.

“Trauma defines your lives, but does not make who you are,” Kolbe said.

Kolbe said it was not an easy decision to share her story and has been in the works for 10 years following the accident.

“I stayed with it because I want to be able to help someone who needs help and hope my story can impact someone in a positive way,” she said.

Kolbe said she and Beth became a team and she found support and inspiration from Beth over the years. She refused to let her new disability prevent her from enjoying life, Kolbe said.

Beth was a Columbian High School valedictorian and swam on the U.S. Paralympic national team for five years and later became the first with a visible disability on the varsity Harvard women’s swimming and diving team. Beth earned 14 S3 American records, with nine still standing.

Beth is a health policy lawyer on K Street in Washington, D.C., and is set to be married this May.

Kolbe has been a life-long disability advocate – even before Beth’s injury. She is a writer with a blog and more than 50 articles since 2016. She is a peer mentor for the Reeve Foundation and a volunteer for other disability groups and mental health nonprofits.

John said he is proud of the work his wife has done with this book.

“You can really see the emotion she pours into her writing,” he said.

Kolbe said she hopes to pass on the message of hope with her story.

“Hope is an incredibly powerful thing,” Kolbe said. “And if you never give up, hope wins.”

“Struggling with Serendipity,” is in bookstores now.