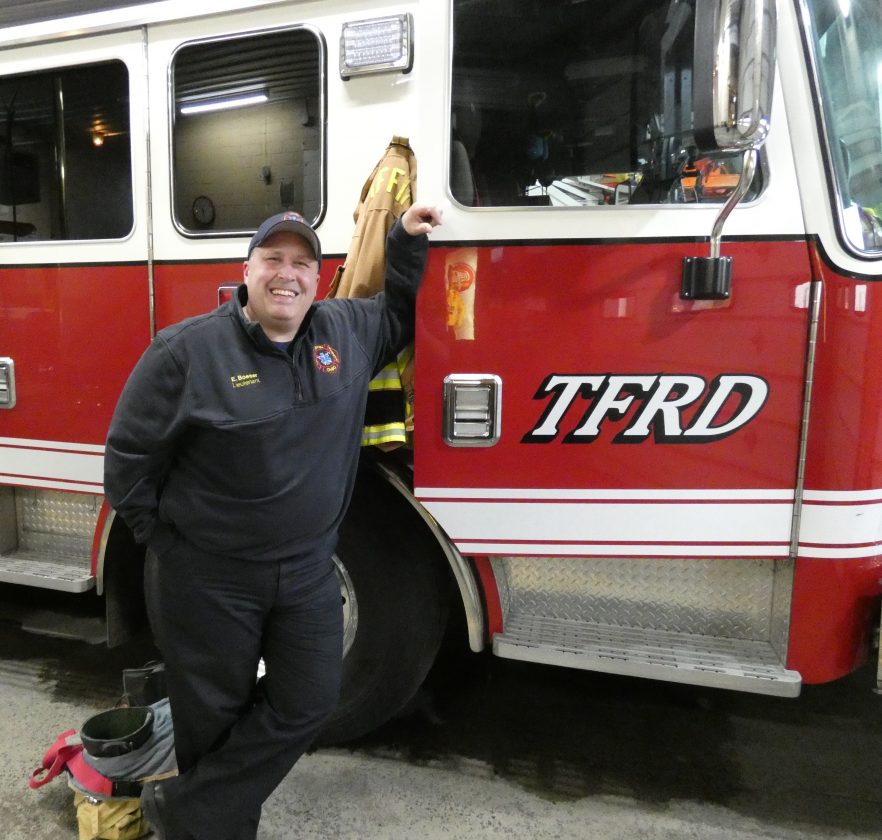 Today is Eric Boeser’s last day as a lieutenant for Tiffin Fire Rescue Division because he is retiring.

A lieutenant at Tiffin Fire Rescue Division is working his final shift today.

“That’s where I caught the bug for the firefighting stuff,” Boeser said. “Basically, you were always doing something pretty interesting. The adventures were interesting and the camaraderie with the (people), you’re a team and it is a brotherhood.”

“It’s hard to get away from and it’s one of those things you want to keep doing because it’s just that much fun,” he said. “There’s rarely a day where you don’t want to come to work, at least for me.”

Boeser said he was hired at Tiffin Fire Rescue Division in February 1998, and went to the fire academy and received his firefighter and EMT state certification. He later became certified as a paramedic and then, a fire inspector and he became a lieutenant at the department in 2017.

Boeser said he became heavily involved in the fire intervention program around 1999 or 2000 and even spent two weeks at a clown college program at the University of Wisconsin. He dressed as Too-Way the Clown and went to local schools and different groups teaching fire prevention. Boeser said the program helps to offer a fun way of presenting fire safety to kids that holds their attention, but they also learn something.

Captain Mike Steyer of Tiffin Fire Rescue Division said after Boeser took over the program and became the clown, he just “took it to a whole new level.”

“He made it work and he’s just got the best personality in the world for that,” Steyer said.

Boeser said he also became an interventionist for the juvenile fire setters. Steyer said any time a youth would start a fire in town, parents had the option to bring them in and Boeser would go through fire dangers and safety and work with them.

Captain Jon Nutter of Tiffin Fire Rescue Division said Boeser is still involved with the fire prevention and juvenile fire setters programs. He said it really tells people something about him since he became involved not long after being hired.

“It didn’t take anybody long to know that he was that guy,” Nutter said. “He was very good at that…and he’s a natural. He’s very good at making people laugh.”

He said while Boeser is “certainly a very competent medic and firefighter,” he thinks his best quality is that he’s a people person and he’s very good with children in particular. Nutter said he noticed how Boeser had a very good ability to physically stoop down to get to the children’s’ level and was just great at connecting them. He is just “a naturally funny person to be around and is good at connecting with everybody,” he said.

“He’s just someone people gravitate towards. He always has a really great sense of humor and is trying to make people laugh,” Nutter said. “The stuff we deal with on a day to day business, he’s good with relieving that tension with humor. He’s a good dude.”

Boeser said the biggest thing he has learned over the years is that you can’t lose your sense of humor.

“You got to maintain your sense of humor and look into things and find the good in every situation,” he said.

Boeser described his time at the fire department as “very rewarding,” adding that he got to do some cool things that he wouldn’t have had the opportunity to do elsewhere. All the fire prevention was fun and in itself, it helped breakup the monotony of the day, he said. Boeser said he met a bunch of cool and great people, which is actually one of the things he’s going to miss the most.

Nutter said he was on the same crew with Boeser when he first started and has been a captain over him for several years. With the exception of probably five years, he and Boeser have always worked together, he said. Nutter said they always played practical jokes on each other and had a real good time, which made it fun to go to work.

“There are days where maybe you had a bad day on a previous shift or something that makes it hard to get to work when you’re dealing with all we deal with, but he had a good way of helping you shake that,” he said.

Nutter said, just like any job, you can get bogged down with the day to day. The thing that most people remember about Boeser is that he makes them laugh, he said.

“He really helped bring a crew together and make the guys look forward to coming to work, and I think moreso than anyone I have ever worked with,” Nutter said.

Boeser said he accepted a full-time position with the State Fire’s Marshal’s Office as a fire inspector, doing fire inspections and code enforcements, and he is to start April 1. He said he is looking forward to the next chapter in his life.

“This was just another chapter of it and it comes with all the other chapters in your life. You wish you could stay in those moments you really enjoyed, but you can’t…,” Boeser said. “Like firefighting, you can only do it for so long. You reach a certain point in your career where you got your time in and unfortunately, you can’t do it forever.”

Boeser said this type of career is always looking for people that have the love and desire to do what they do. He said while it might not be for everybody, it’s one of those jobs that really needs people.

“If you’re thinking about it, I would say go for it. If it’s something you started thinking of as a little kid, or want to do as an adult, or you have the means, definitely go for it because it’s definitely rewarding and worth it,” Boeser said.

“I like to be able to help people but on the other hand, it’s sad to see some of the things we see, but you know we do it, and we do it gladly,” Boeser said. “We see people on their absolute worst days as individuals and as a family. But it’s something we don’t shy away from and we will gladly try and do everything we possibly can.”