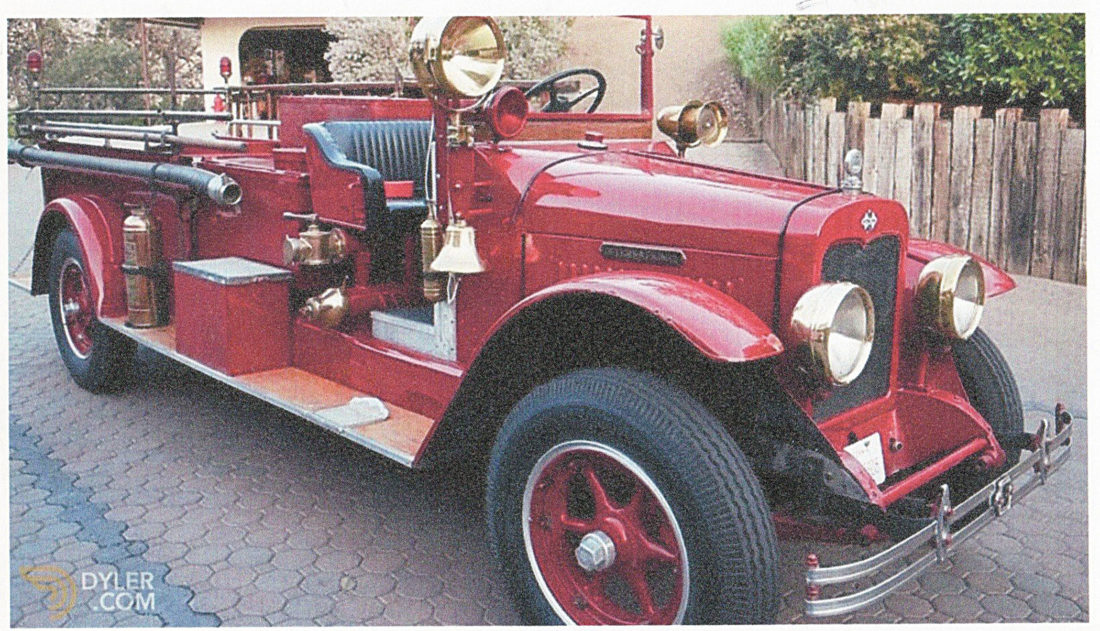 Funding is being sought to purchase an original Bascom Joint Fire District truck from the late 1920s.

Joseph Brandt, a retired fire chief and current firefighter with Bascom Joint Fire District, said when he began looking for the truck, he didn’t even know if it still existed, because so many old trucks are scrapped. However, the truck was well used, he said.

“After looking at run records over the years, I knew there was a good chance it might be around somewhere because it didn’t get a lot of use in those years,” Brandt said. “I thought, ‘There’s always a chance, you just have to be optimistic.'”

Brandt found the old engine listed on a nationwide auction website totally by chance. He said his daughter, Natalie Ardner, was able to find the information and listing on another website.

After a phone call to the present owner, Brandt said it was confirmed that the truck was indeed the old original motorized fire apparatus of the Bascom Community Fire Department. He knew it was the same truck when the present owner said it came from Konkle because he knew that Bascom’s truck had gone there as well.

“I never dreamed it would be in this good of shape,” Brandt said.

He said the truck was the only one the department had when it started.

Brandt said J. Garfield Haugh, an entrepreneur who created Meadowbrook Park, orchestrated a meeting on Nov. 29, 1927, where John Grogg and several others from Tiffin Fire Department gave presentations on forming a fire department and about fire operations, and a committee was formed for truck purchasing.

Director Tonia Hoffert of Seneca County Museum said Haugh personally helped buy the fire truck. She said one of the reasons the museum would like to help get the truck is because a lot of members from the Haugh family are still involved in the historical society and the museum.

“It’s kind of a tribute to him to show, like, we haven’t forgot what he did for the county all those years ago,” Hoffert said.

Brandt said his own personal connection to the truck is that his great uncle was on the truck purchasing committee.

“They formed a committee and contracted with General Motors of St. Louis, Missouri, to purchase this truck which they received by the end of July in 1928,” Brandt said.

He said the truck, which is nicknamed the “General” because of its General Manufacturing Apparatus body, then served the Bascom community until 1950 when it was replaced. It was moved to Konkle, where it served until 1966 when it was sold to a man from Toledo, Brandt said.

“Growing up, I remember watching Johnny Gage and Roy Desoto, who were paramedics on (“Emergency!“), a show that took place in Los Angeles. This truck went to Los Angeles County …,” Brandt said. “It’s kind of ironic that as we were watching this show, our truck was in the same general area.”

According to an article in the July 27, 1928, edition of The Tiffin Tribune, Haugh, who was active in the community organization that purchased the equipment for $6,500, brought the engine to Tiffin for display the day after it was delivered. Brandt said the best guess he could come up with, was that the truck was delivered by rail.

The article describes the truck as “a triple combination machine of the latest type, fully equiped and carrying 1,000 feet of hose” and that the machine was considered “more modern than any other in use in the county.” The truck was built on a 160-inch International chassis, had two 45-gallon chemical tanks with a booster tank connection and a pumper capable of discharging 350 gallons of water a minute at 180 pounds of pressure, the article states. It also states an engine house costing between $1,200 and $1,500 would have to be built to house the equipment.

Ardner said she was interested in the truck because she considers herself a history buff as well. She said it’s really neat to even have found the truck, let alone to have found it and that it was for sale.

“It’s not every day that you find an original fire truck that is in running order as well,” Ardner said.

Brandt said the owner wants $40,000 for the restored fire truck, but Ardner said $50,000 will need to be raised to bring it here and to get it lettered and stored. Brandt said the truck has 75,000 miles on it.

Hoffert said the reason Brandt even brought it up to the museum was because museum officials have been fundraising for the carriage house. She said the museum has a very large collection of fire apparatus, including a big pumper that helped Tiffin during The Great Fire of 1872, a large bell system, a chemical cart from Bloomville, a hand pumper and other items.

“My son (Bill Hoffert Jr.) is a firefighter with Tiffin Fire Rescue Division and a lieutenant at Bloom Township Volunteer Fire Department. My other son (Ryan Hoffert) is with Sycamore Volunteer Fire & Rescue. Once you live with firefighters, you see how much they do and they don’t get the recognition they deserve,” Hoffert said.

She said they would like to turn the downstairs of the carriage house into a fire department and fill it with fire department related-items. Hoffert said there are 15 townships and eventually, they would like to have fire-related items from each township in there. She said if anybody wants to contribute, donations can be made out to Seneca County Museum and should be earmarked for the carriage house.

Brandt said he wanted to get the truck back because it’s a part of history. He said the department has its very first piece of history which was a hand-drawn cart that was taken around and used in the village, but that was purchased in 1913-15 years before the department was founded.

“It’s history. It’s always nice to have the first of something. It’s how we are as a society,” Brandt said.

Brandt said the goal is to get the truck as soon as possible.

“It’s kind of unique after 91 years that it’s still around, let alone, that it’s restored and atop of that, that it even runs. It’s pretty amazing,” he said.

Hoffert said it’s really important to recognize firefighters and there are a lot in the county.

“A big part of my life is the fire department and other people’s lives too. I think it would be great to have (the truck) here,” she said.

Brandt said they are asking for donations to return the truck home.

“This offers people or businesses the opportunity to get their name in the (Seneca County) museum,” Brandt said.

Two accounts have been set up for donations. A GoFundMe page has been set up and people can donate at http://www.gofundme.com/bring-the-general-home. An account has also been set up at Sutton Bank and donations can be paid to the “Bring the General Home” account and can be dropped off at any Sutton Bank location, he said.