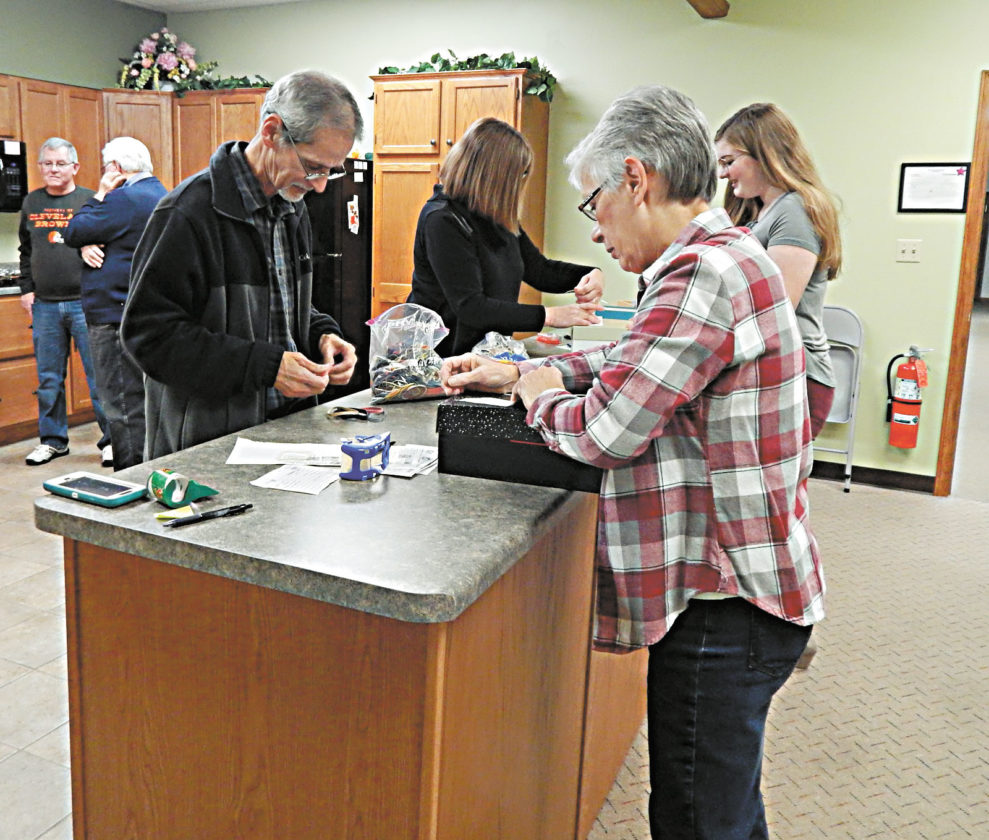 Members of The Journey Church, 2531 S. SR 100, and women from CROSSWAEH packed about 75 shoe boxes as part of Operation Christmas Child Sunday evening.

“The shoe boxes mostly go overseas, though they do have placement with American Indian reservations here in America. The goal is to reach the poorest children and meet some of their daily living needs,” Ramsdell said. “That’s also why we send school supplies because most kids have to bring their own in other countries, but then we try to add fun things to brighten their days as well.”

Church member Brenda Covert said Operation Christmas Child as a program is not just about sending shoe boxes, but it is an opporturnity for them to tell the children about Christ.

“Hopefully, they are able to make that connection with Christ and learn about him and follow him,” she said.

Ramsdell said a Gospel tract in the children’s local language is sent with each box.

“(We’re) not ashamed of that. It is offered in the name of God and God’s love and we believe when Jesus came to Earth he healed people’s physical needs and he also loved them and met their spiritual needs. As an organization we’re trying to do that too,” she said. “We want to meet their physical needs, but at the same time show them there is a God that loves them who can meet their spiritual needs as well.”

Ramsdell said the national organization makes promotional videos that the church shows to get members excited about making the boxes. After Christmas of 2015, the video had other volunteers that worked on the boxes with people from a halfway house, she said.

“It showed how they gave a voice to others and helped those who are often marginalized and how being part of the project helped them contribute positively to a bigger part of world,” Ramsdell said. “We’re close to CROSSWAEH … and we we’re like, ‘we could do that.'”

She said church members began inquiring if they could come in once a week and have the ladies make handmade crafts to put in shoeboxes and about five to six church members did it for 12 weeks with the women at CROSSWAEH in 2016. Ramsdell said they had so much fun they didn’t want to stop going, so they asked if they could continue, which they have.

The weekly gathering is called “Christian Crafts” and the women get an hour of community service and it counts for their rehabilitation program, she said.

Covert said she has led the crafts since they have been partnered with CROSSWAEH. She said each week they do a planned craft, which can be anything from crotcheting items such as hats, scarves, wash clothes or purses to making toy crafts that can be put in the shoe boxes.

“We do something different every week,” Covert said.

In addition to visiting weekly, Ramsdell said with permission from CROSSWAEH, the women are allowed to come over to the church for the annual packing party.

“The ladies get to pack and choose what goes in each individual box according to national guidelines, which differs depending on if they’re a boy or girl and their age range,” she said. “They get to put different stuff in it and it’s so neat seeing the women be so careful to pack boxes and pick what they want. It’s a very meaningful time.”

Ramsdell said the group also tries to include a photograph in every box of the CROSSWAEH ladies and church members to give them a personal touch.

She said when they first started parterning with CROSSWAEH, they thought it would help the women and give them something positive, healthy and productive to do. Ramsdell said they were floored by how much the church members were blessed just by working with the women.

“We’ve heard their stories, made new friends and have much in common with one another,” she said. “We’ve been every bit as blessed by working with them as we thought we were helping them.”

Covert described working with the women from CROSSWAEH as “very rewarding” and said it was a different experience from what she thought it would have been. She said it’s “been a blessing for all of them to work with the women.”

“Working with CROSSWAEH, it just gives us the opportunity to introduce them to Christ as well,” Covert said. “Many of them have not been to church or anything and we can work with them and our ultimate goal is for them to come to know Christ and what he can do for them.”

Ramsdell said church members also have learned a lot about the American incarceration system and about the drug addiction problem.

“They are brave and we are proud of them for completing the program to go home and make a new life for themselves and their family,” Ramsdell said.

She said after watching the videos, it is on her bucket list to go overseas and help the locals distribute the boxes.

“It brings tears to my eyes how much it means to these children to receive these gifts. To see them pull out a rubber ball and scream with joy or a pack of pens and pencils and they can go to school. (Knowing) I can have a small part with that is just amazing and it is a miracle,” Ramsdell said.

Covert said what it means to play a part in Operation Christmas Child is hard to describe.

“It makes me feel really good to help these kids that don’t have anything and just to bring some joy into their life,” she said.

Ramsdell said members of the church individually pack boxes and then they bring them in and put them together as well. There is no target goal, they just make as many as they can do, she said.

She said it’s not only easy, but donors can print labels that have a tracking bar code which is scanned at various parts along the way so they can send their own package and see what country it goes to. After flying boxes to major airports, Ramsdell said the boxes are given out as far as they can to villages and small towns. In some places, they are delivered by canoe, donkey and motorcycle

“Then, those volunteers usually have a distribution party where they invite children to come out and they all get them and open them at the same time,” Ramsdell said.

It costs $9 to ship each box and anybody can contribute money that will go toward shipping, Ramsdell said.