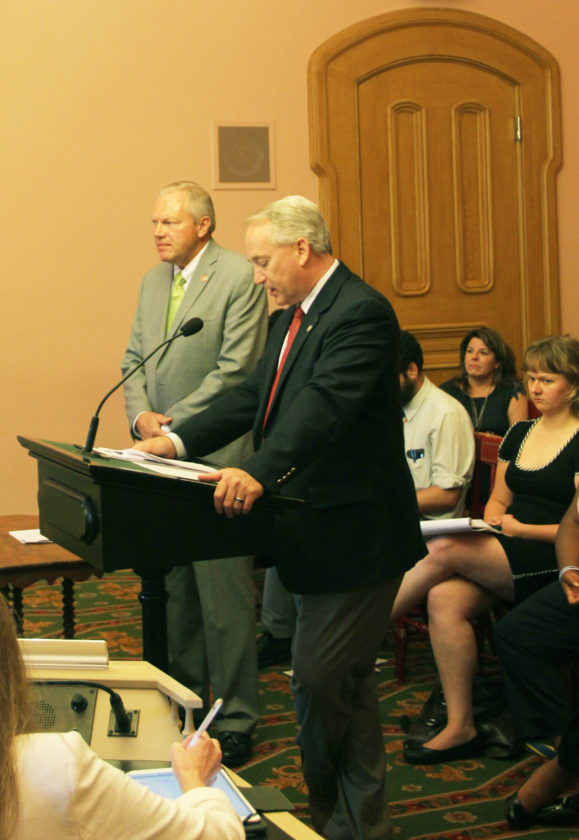 State Rep. Bill Reineke has teamed with another legislator to introduce a bill this week that would address shortcomings in Ohio’s laws governing e-schools, but he has not agreed to return funding he received from an e-school founder.

According to a release, the legislation would increase transparency and establish consistent regulations for education providers across the state.

In 2016, e-schools served about 180,000 students in the U.S., providing a non-traditional education option for families. The legislation, House Bill 707, would maintain this option, while making sure the schools are regulated properly to provide quality education to students.

“House Bill 707 tightens existing statutes which will allow for the state of Ohio to properly conduct oversight of e-schools,” Faber states in a release. “The tightening of these existing statutes is to ensure that students of e-schools are receiving the quality education that the 21st-century economy requires.”

The release states the bill clarifies guidelines for the Ohio Department of Education to better conduct reviews of e-schools.

“I am a supporter of school choice and for providing alternative pathways for Ohioans to receive a quality education,” Reineke states in the release. “However, we must ensure that these alternative pathways are properly structured and regulated. House Bill 707 addresses shortcomings in Ohio’s current regulatory environment regarding e-schools and seeks to stabilize a valuable and much needed education option for Ohio’s students.”

Reineke’s support of the bill comes about a month after his Democratic opponent for the Ohio House District 88 seat criticized him for accepting campaign contributions in 2014 from Electronic Classroom of Tomorrow founder William Lager.

Rachel Crooks, of Tiffin, asked Reineke last month to explain more than $12,000 he received from Lager and asked him to donate those funds.

According to the Ohio Secretary of State’s published finance reports, Reineke received $12,155.52 from Lager in October 2014.

A release from Crooks states ECOT intentionally exaggerated attendance claims, thus “robbing the state, and thereby the local districts of millions.” In the 88th District, ECOT took more than $4 million from local schools since 2012, the release states.

“For-profit charter schools like ECOT have been allowed to operate with no accountability for far too long, and they doled out millions in campaign checks — including $12,155.52 to Bill Reineke,” Crooks states in a release. “At least $80 million was pilfered from Ohio taxpayers, and Ohio’s kids have suffered because Republican lawmakers failed to crack down on ECOT’s shady practices for too many years That’s why I’m calling on Reineke to donate all funds he received from ECOT.”

As of Wednesday, Reineke had not commented publicly on the request.

Crooks states in a Tuesday release that Faber and other Republicans had returned ECOT-linked donations. The Ohio Republican Party last year gave back $76,000 donated by Lager and a top associate.

“Democrats in the Ohio legislature have been trying to call attention to accountability for for-profit charter schools for many years now, while Republicans looked the other way and accepted donations from individuals linked to ECOT,” Crooks states. “That these same people would try now to pretend like they car — because it’s an election year — should infuriate the taxpayers whose dollars were lost and the students who were failed by poor education policies.”

According to a May 21 Columbus Dispatch report, ECOT was closed in January after the state ordered it to repay $80 million for unverified enrollment over two years. ECOT has received about $1 billion in state money since 2000.

The article states Ohio Auditor Dave Yost announced two weeks ago that ECOT officials may have committed fraud by purposely submitting “junk” student participation data to the Department of Education to boost the school’s state funding.

Other factors emphasized in HB 707 to maintain transparency include:

• Adopting rules to determine how an e-school may disenroll students for lack of participation.

• Requiring e-school management companies or related companies to reimburse the school for losses not exceeding the amount of profit realized by the companies.