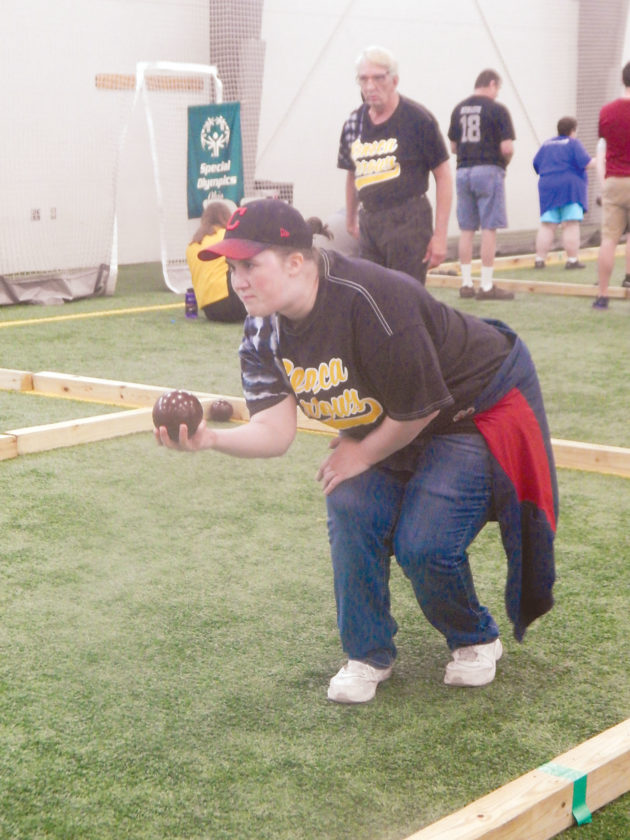 PHOTO BY NICOLE WALBY Michelle Gase (front) and her partner, Chris Wagner (back), compete in a bocce ball match Saturday.

The Ohio games took place on the campus of The Ohio State University.

Steve Barns, who ran the 1,500-meter dash, placed fifth, and the 4×100 team took home bronze. This is the first year the Seneca Arrows had a relay team in the games.

In woman’s bocce ball, Cindy Moyer participated in the games for the first time this year. She and her partner, Cheryl Rubel, took home the bronze medal.

“It was awesome,” Moyer said.

The other bocce ball team of Michelle Gase and Chris Wagner took home the silver medal in their division.

Spencer said all he can do is just hope to out throw the others.

“I was nervous, but all I could do was my best,” Spencer said.

Emily Kleinfelter, who competed in the female bowling competition, brought home gold as well in her division.

Activities Coordinator Kristina Egbert of the Opportunity Center said, “My goal is that I hope everyone comes home with a medal.”

Allen, Spencer and Garcia are to compete today in the men’s 100-meter dash. The male bowlers — Jerry Recker, Steve Scifers and Patrick Steyer — also are to bowl today.