‘Mac’ retiring after years of service 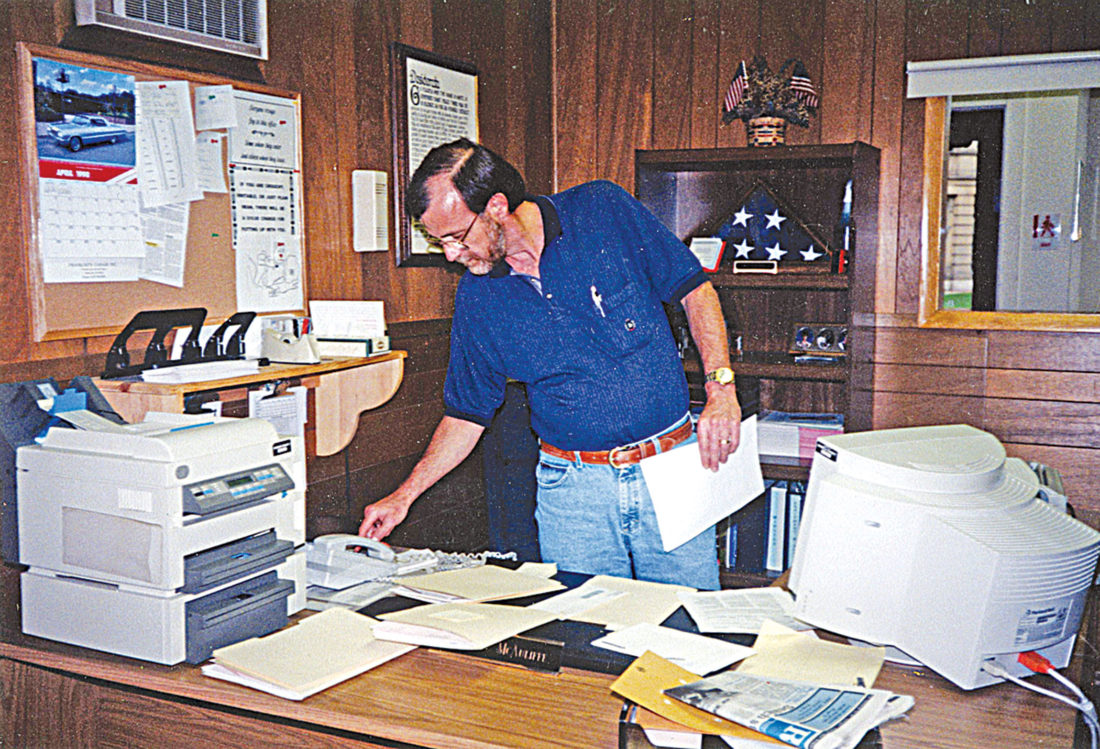 PHOTOS SUBMITTED These pictures show Seneca County Veterans Services Office Executive Director J.M. “Mac” McAuliffe at work in the past (above) and in the present.

Executive Director J.M. “Mac” McAuliffe is retiring after working 27 years with the organization, including serving in his current role since 2009.

McAuliffe began working at the office after he retired from the U.S. Air Force. He said there was a big Air Force base outside of his hometown of Goldsboro, North Carolina, and growing up, he enjoyed watching the airplanes, and a lot of the kids he went to Catholic school with were from the base.

When he was 17 and got out of high school, he knew his parents couldn’t afford to send him to college and decided that going into the Air Force was his best option.

“My brother was in the Air Force, too, and it was funny, he got out in 1969 and he did his best to talk me out of going into the service. He offered me the world …,” McAuliffe said. “I went into the Air Force and I ended up staying for 20 years.” 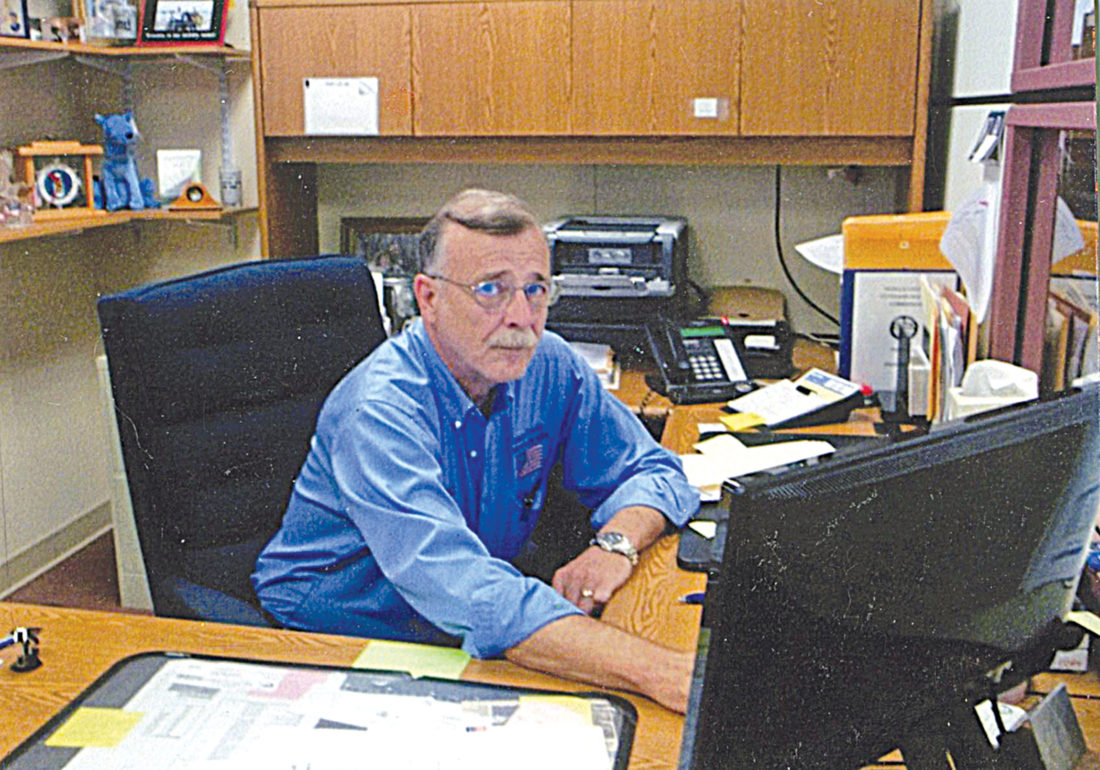 PHOTOS SUBMITTED These pictures show Seneca County Veterans Services Office Executive Director J.M. “Mac” McAuliffe at work in the past (above) and in the present.

He said he stayed in the Air Force because he enjoyed it.

“One of the things that I used to tell people was that for a long time, I enjoyed the idea that I could go to bed tonight here and the next time I go to bed, it’s 8,000 miles away, because that’s how it was back in those days,” McAuliffe said.

At the time it was an advantage, but as he got older and had kids, it became a disadvantage, he said. McAuliffe said he liked it, though, and was lucky enough to have good jobs and was, for the most part, in good locations.

He said he started out as a radio operator doing air-to-ground radio communicating with the planes and then worked as tech order monitor where he made sure all the tech orders were current.

He briefly worked as a bomb loader and then was in the cops and as a recreational specialist, which was an administrative assistant role. McAuliffe said he also served as an overseas postal inspector and as a troubleshooter. He then was sent back to Korea and went back into radio, which is how he finished out the last nine years of his service.

McAuliffe said he was stationed all over the United States and the world, including Michigan, Maine, Florida, the Philippines, Korea, Thailand, Indonesia and Spain, and he retired from the service with a rank of master sergeant.

Service after the service

After retiring from the Air Force, he said he needed to find a job and ended up driving a truck for ICP the first year. Then, he said, the veterans representative was retiring in the summer of 1991 and, being registered at the unemployment office, he was interviewed for the job in July and started in September.

“I knew part of the job, but there are so many facets to this job, I had no idea. I just knew it was a job and it looked pretty solid and quite honestly, I thought it would be quite a decent job getting to work with vets, and it was,” McAuliffe said.

He said when he started he was responsible for the financial assistance program, which was a big part of what they did at the time.

“The board back then, when they hired me they had started the process of looking at things differently so financial assistance, they were changing their outlook; rather than making it a kind-of way of life for people, they wanted to change it so more effort was concentrated on long-term benefits and there was also some fraud going on back then,” McAuliffe said. “So, they wanted me to eliminate that and we got that done.”

He said that probably took about a year and a half to two years to do and he started working claims after that. He became a service officer in the mid-’90s.

McAuliffe said he learned a lot about claims from different people, including Pat Warren, whom employees called “Mom,” and who worked in the office for 33 years.

“I was familiar with the (U.S. Department of Veterans Affairs), but I wasn’t familiar with the way that you had to do things to get things done,” he said. “I was lucky that Mom was here, because she taught me a lot. Then, later on, when I got involved with the people from the state association, they’re the ones that really taught me the intricacies of the job.”

McAuliffe began teaching for the Ohio State Association of County Veterans Service Officers in 2000 and, about four years later, he started teaching for the National Association of County Veterans Service Officers, which he did for 12 years. He said he was very fortunate the board let him get involved with the state and national associations and that he was asked to teach.

“I was very lucky I got hooked up with some people who were involved with the state training program. I taught other service officers (how to get benefits for veterans),” McAuliffe said. “For four years, I was the education sheriff for the state, and that’s how I got really into the education and training programs.”

McAuliffe said the job definitely has changed over the years, and when he started, there were a lot of people who were handwriting claims and there was really no way of checking on claims with the VA other than calling the local American Legion or Veterans of Foreign Wars post. Later, once things started changing and officers spent more time at the VA for training, it started getting better, he said. McAuliffe said there was a time when it took nearly two years for the VA to process a claim, but now it takes about three to six months.

“Overall, with all the changes and all the improvements and the way we can access and get into the VA system and look into claims, it’s so much better now for the client,” he said.

McAuliffe also noted the office got its first set of computers in 1993 and it cost $30,000 for one computer and two “ponies,” which were empty boxes with floppy disks in them and were directly linked to the hard drive.

“That’s when the job, as far as the paperwork, started getting a lot easier, because of the computers,” he said.

Assistant Director Tara Balliet of Seneca County Veterans Service Office, who is to take over as executive director when McAuliffe retires, said it’s not easy working for Mac because he is very meticulous and veterans claims work is “his whole life” and “what his passion is.” She said at the office there motto is “work hard, play hard.”

“I’ve worked out here now for a little over eight years and I’ve learned a lot from Mac, but the one thing that we never failed to do was have fun, too. We’ve always had fun out here,” Balliett said. “This job can be kind of heavy at times. A lot of the people we meet every day are very, very sick, but we manage to always find a ray of sunshine.”

She said the staff always tries to make sure that when people leave the office, they feel hope and that they are valued.

“Even if we’re not able to deliver any benefits from the VA, we here in this office value their service and them as people,” Balliett said.

She said while she is confident in her abilities to fulfill the duties of the executive director, she is going to miss McAuliffe a lot.

“I’m going to miss his companionship and his sense of humor and his drive to get the job done,” Balliett said.

Once he retires, McAuliffe said, he plans to do some traveling to North Carolina, Georgia, Colorado Springs and Columbus to see various family members. He said he’s not going to do anything he doesn’t want to do and he knows the office is going to run fine without him because of the people who work there.

“That’s honestly one of the things I’m most pleased with is that I can walk out of here (July 2) and I know my vets and their families are going to be taken care of,” McAuliffe said. “I know they are because I know (the employees) and I trained them, so I know that they know what they’re doing.”

McAuliffe said he married his wife, Joan, in 1996, and there were times they would go days without seeing each other. He said he was lucky that Joan was willing to do that and said anybody who does the job right has to sacrifice and do that kind of thing.

“That’s one of the reasons I decided to retire. She’s been in the backseat a lot of times for years because of teaching at national or state or just the job,” he said. “Now, its time she gets to sit in the front seat for a while.”

McAuliffe said though he has been all over the world, he has no plans to leave the area.

“Honest to God, I have met some of the best people I have ever met in my life right here in Seneca County,” he said. “There’s nowhere I would rather be than right here.”

President Skip Craun of Seneca County Veterans Service Commission said McAuliffe has been a great advocate for veterans and is really dedicated to helping veterans get the help they deserve and need.

“He taught me a lot about veterans’ benefits,” he said.

Craun said McAuliffe has made a lot of people in the county and surrounding county offices greater. He said he has done a lot of work in other counties and has helped train many officers all over the United States.

“He has made our office one of the best service offices in the state,” Craun said. “Mac has been a good friend and I’m going to miss him, but I know he trained his staff well and they will follow in his footsteps and remain one of the better counties in Ohio.”

McAuliffe said the office has helped get so many people into the VA medical system and in 2016, Seneca County had the highest per capita enrollment for the veteran population in northwest Ohio.

“That, quite honestly, is because we pushed it so hard. We did,” he said. “We got a lot of people into the system.”

Reflecting on his time spent at the office, McAuliffe said he and his staff had fun, enjoyed working, enjoyed the people who came in and they got a lot of good stuff done, which he is proud of. He said they always made sure that when people came in there, they were treated the way they should be treated and it was nice to make people’s lives better.

“Honestly, it’s the best (darn) job in the world. We got to come to work every day and help veterans and their families – I mean, that’s the best feeling in the world. It really doesn’t get any better than that,” McAuliffe said.

The public is welcome to visit 11 a.m.-2 p.m. Friday at the conference room located right behind the Seneca County Veterans Service Office, 920 E. CR 20, to wish McAuliffe well in his retirement. For more information, contact Tara Balliet at sencotsb@bright.net, Matthew Prenzlin at sencomatt@bright.net, or by calling (419) 447-2885.