Shaped by the master 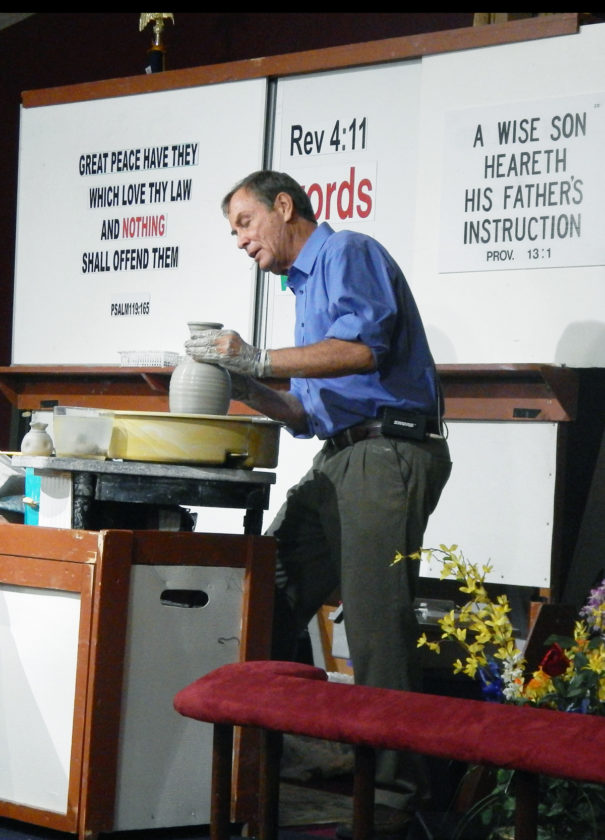 Evangelist David Engesath is to lead services at Truth Baptist Church, 566 N. Washington St., at 7 p.m. today and Friday. Sunday, he is to lead Sunday school at 10 a.m., a worship service at 11 a.m. with a potluck meal after, and a service at 1:30 p.m.

An evangelist who makes pottery while preaching is to present his message at Truth Baptist Church, 566 N. Washington St., this week.

Engesath said that over the past 11 years, he has traveled to churches nationwide preaching about Christ and clay.

While he and his wife, Diana, have traveled mostly to Baptist churches, they have been to all Christian denominations and mostly talk about the judgment seat of Christ, he said.

“The goal is to remind Christians of that judgment and encourage them to prepare for it,” he said. “It’s about not focusing on us but focusing on him because that’s why he created us. Eternity is a lot longer time than 60, 80 or 100 years here on Earth.”

Engesath said in the 1960s he went to the University of Minnesota, but had no direction and dropped out. He realized he wanted to paint and draw, so he took classes. While at school, he saw students across the hall working on pottery and “fell in love with it.”

Engesath said he began making pottery in the ’70s and he and Diana moved to Florida.

“Diana asked me what I wanted to do and I said I wanted to open a pottery shop,” he said. “We operated that for close to 35 years.”

He said the shop was “very good to them” but in 2003 he sold it after he “surrendered to the lord” and decided to go to Bible school in northern Florida. After graduating in 2007, the couple immediately began traveling across the country, he said.

Engesath said he initially had one message but now has about 20 messages that relate to clay. The idea to combine pottery and religion came from Diana, he said.

“The idea came when my wife got saved before we met in the early 1970s. She always spent a lot of time reading the Bible and studying it and she made all these connections,” he said. “She wrote a book in the early ’90s called ‘Thou Our Potter’ that goes over the eight stages and what I do and it talks about some other connections as well.”

Diana said she is involved in the ministry and makes cards and speaks at women’s meetings at churches they visit.

“I love my ministry and I am grateful the lord put us in this,” she said.

Diana said she has published a children’s book, which she wrote for her grandchildren, and is continuing it as a series. All of her books are related to the material Engesath speaks about, she said.

Engesath said humans have free will that can “hinder or thwart or frustrate God’s perfect will to shape us.”

He said rushing the shaping process can have negative effects, just as it can with clay.

“If I don’t process the clay correctly in the beginning and I try to make that vessel, it can break or warp or crack because it hasn’t gone through the stage correctly,” he said.

Engesath said the Bible states that God is a potter who made people out of clay. In his own work, he said he makes different shapes of vessels and they coincide with different messages.

“I preach while I’m making things on the potter’s wheel so it is a very visual ministry,” he said. “I think it gives insight into what God is trying to do not only to us, but through us.”

He said he uses the same clay over again as he rewedges most of what he makes into something else. However, Engesath said he leaves a pottery creation at most churches.

The Rev. James Martin of Truth Baptist Church said Engesath visited the church in the fall, but what he had to share couldn’t be done in a single day so he was invited back. He said the church decided to have Engesath back for a four-day meeting so he could go further in depth.

“What he does is basically show us how frail we really are as humans and the supernatural power of Jesus Christ as master potter,” Martin said. “The in-depth study he gets into to show that and reveal that is just incredible.”

Martin said that while his church is Baptist, members really are Bible believers who push the Bible, not a denomination. He said any religious organization that is made up of Bible believers, regardless of denomination, would want to have Engesath at their church.

“We live in a world where people want to see and be entertained,” he said. “It is watching a man put into reality the word of God before your eyes and again, when you see the presentation, it just opens your eyes so much to the truth of the word of God.”

Engesath said he is not trying to show people anything that doesn’t come from the Bible, which is why he believes people are so accepting of his message.

“Knowing that my message isn’t something I made up, but that it is scriptural helps (people) understand the Bible,” he said. “The Bible is clear that (people have) an eternal soul and will spend eternity in one of two places. You will be judged one day for what you did with that salvation.”

Engesath said he and Diana, who have been on the road since December, purchased a mobile home six months ago and plan to sell their Tennessee home soon.

He said they enjoy having a house on wheels and it allows them to visit their grandchildren.

“We love living on the road and going church to church wherever it takes us. We don’t charge anything for our ministry, but some churches take up a love offering,” he said.

Engesath said it surprises them how many small, faithful churches there are in the country.

“I go to churches with 50 to 60 people and that’s how a lot of them work all over the country as difficult as it is,” he said. “They’re so strong about their beliefs in the Bible and what God wants them to do, they are thriving even in a society where Christianity is becoming less and less tolerated.

“Our country was founded on Christian beliefs. Churches have held on to those beliefs and there are more of those out there than you would imagine. It’s encouraging to us knowing there are faithful people out there doing those things.”

Diana said the couple has visited every state in the Lower 48 and there are many faithful people.

Even their home church, Cornerstone Baptist Church in Carthage, Tennessee, has about 300 people who attend, even though it is a small town. He said one possible reason small churches are successful is that it is easier to be like a family.

“Ideally, a good church is a family regardless of denomination so churches that are smaller feel more like a family,” Engesath said. “As you get older, you realize that family is so important and that is scriptural. … For many people, church family is their real family.”

Engesath said the lord has taken care of him and his wife and they want to keep doing what he wants them to do.

“I’m 70 years old. I feel very fortunate and very grateful that I’m doing something at my age that has eternal significance…,” he said. “I think it’s an encouragement to people. Any time you are opening the Bible and people are growing close to Christ because of it is good.”

No one has gone unaffected by the coronavirus pandemic, but the Seneca County General Health District’s WIC ...

BC board to meet

NEW WASHINGTON — The Buckeye Central Board of Education is to meet at 7 p.m. April 23. The meeting is to take ...