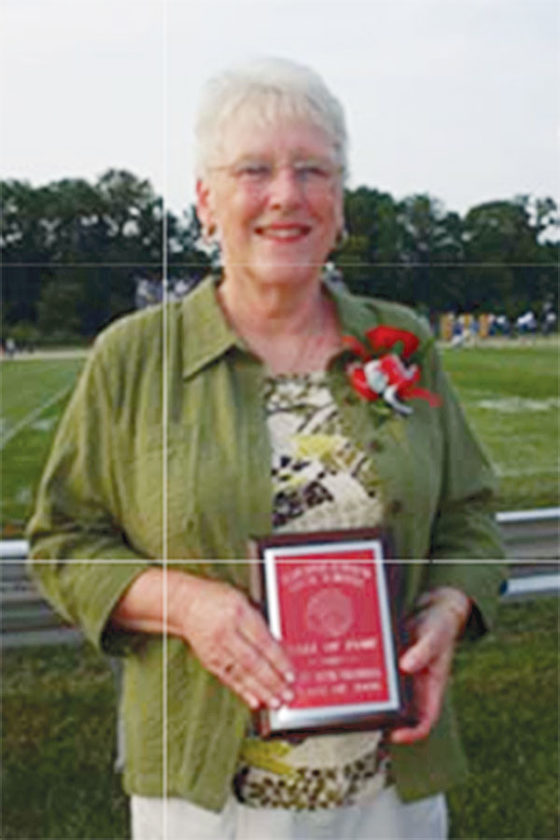 PHOTO COURTESY OF H-L WEBSITE Mary Ruth Crandall was inducted into Hopewell-Loudon's hall of fame in 2008.

BASCOM — A Fostoria woman who devoted more than 20 years to Hopewell-Loudon Schools is being remembered as a respected leader and excellent teacher who lived a full life.

Ron Jump, who served as Hopewell-Loudon’s superintendent, said Crandall was a special person.

Jump said Crandall would pack as much into a day as she possibly could. Her legacy will be all of the good things she did, the fine teacher she was and the many people she helped and was associated with, Jump said.

Crandall had been a part-time teacher for Tiffin City Schools and Fostoria City Schools. She spent more than 20 years at Hopewell-Loudon and retired in 2000.

She was an English teacher, athletic director and dean of students; coached track, cross country and volleyball; and advised cheerleading, quiz bowl and the senior class, according to Hopewell-Loudon’s website.

“Her devotion and influence on those whose lives she touched in her many roles at Hopewell-Loudon did not end with her retirement,” it states.

Jump said Crandall was an excellent teacher. She moved into an administrative role and was equally as good and effective, he said.

“She was good at any position that she happened to be in,” he said.

Crandall served on the Hopewell-Loudon school board, its building facilities committee and its levy campaigns for a new school building. The levy for the new school failed the first time.

A lot of people wanted to give up, said Steve Acton, Hopewell-Loudon’s technology coordinator.

“It failed by a large margin,” he said.

But, Crandall was among a handful of people who rallied. She encouraged people not to give up, Acton said.

“Let’s keep going on this,” he recalled.

“She had the energy, and we went again,” he said.

Acton said Crandall motivated officials the whole way through, and the levy passed by a large margin on the second try.

“She was there for every tour, every meeting,” he said.

When the levy passed, school officials gathered at Crandall’s home and toasted with champagne poured into a construction hard hat. Acton said he thought there was no doubt in her mind it was going to pass the second time.

“She had the eyes and ears of the whole community,” he said.

Crandall was inducted into Hopewell-Loudon’s hall of fame in 2008.

Jerry Snodgrass, director of sport management at Ohio High School Athletic Association, met Crandall about 25 years ago when he was serving as the athletic director at Findlay High School. Crandall was active in Northwest Ohio Interscholastic Athletic Administrators Association and was an integral part of the association’s annual conference, he said.

She was a rock of common sense, Snodgrass said.

“Do this, and it always made sense,” he said.

Snodgrass described Crandall as an “old-school” person who believed in values. Athletic directors would experience problems and go to a conference, and Crandall, who always was reassuring, would be there.

“Everybody’s got (problems),” he said.

Snodgrass said Crandall taught that it isn’t what one gets paid or the person’s job description.

Being suicidal ‘a treatable condition’

Every single person in the area has at some point interacted with someone who was having suicidal thoughts, said ...

March 15 is deadline to sign up for farm programs

Senior board member Bill McAllister was elected chairman of Seneca County Park District’s board during its ...