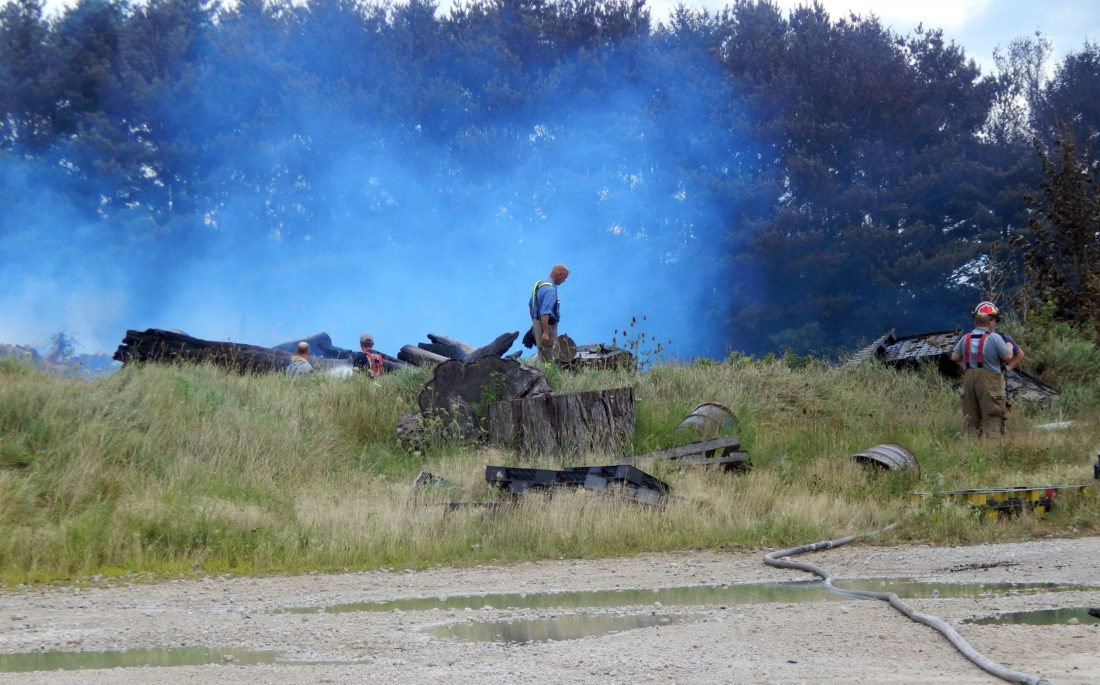 Bryan Ruehle, co-owner of B R Pallet Inc., said the business disassembles, re-assembles and repairs wooden pallets and the property is owned by his father, Carl Ruehle.

Upon arriving at the scene, Price said there was a fully involved structure fire located to the southwest of the property. He said as the fire intensified and grew, it moved towards an open lot to the east. The involvement of the fire in the first structure and the weather was a factor in catching other buildings on fire, he said.

“The wind played a vital role. Since we had a west breeze at that time, that pushed the fire through the first building and then eventually into two other structures,” Price said. “A total of three structures were affected by this and it was a total loss of all those structures.” 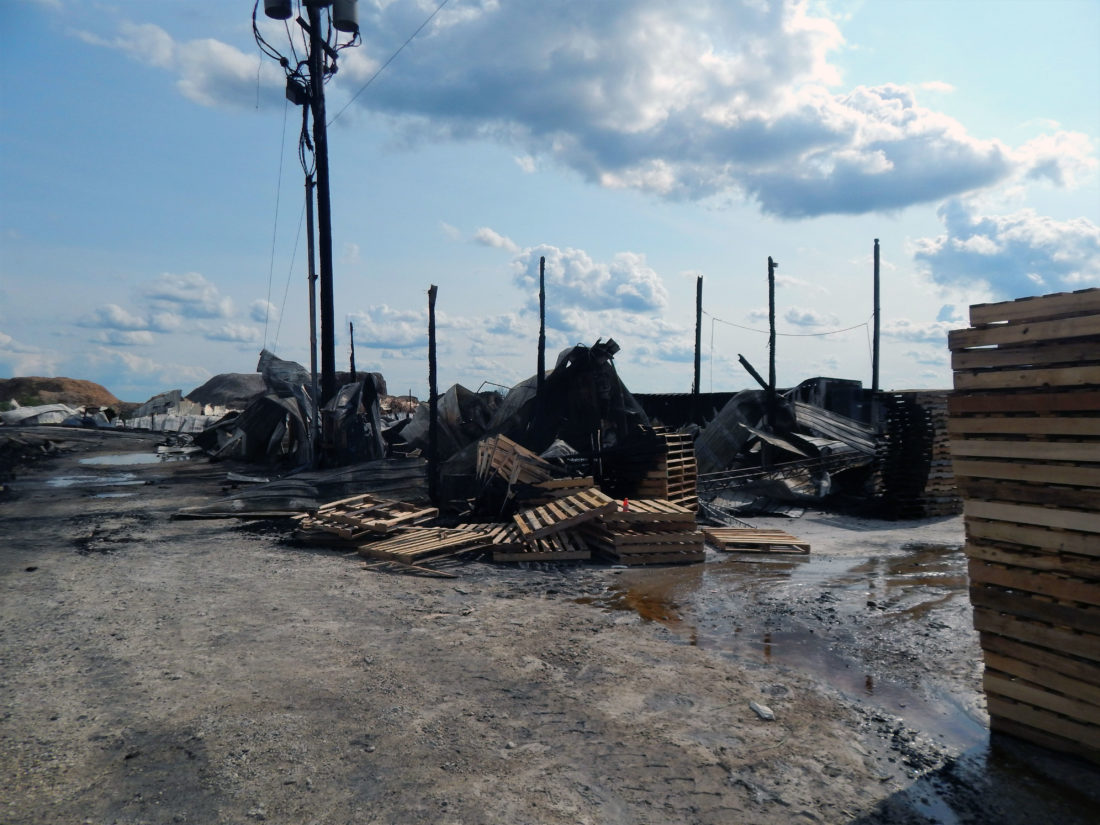 PHOTO BY JACOB GURNEY Damaged pallets are seen after a fire Friday at B R Pallet Inc., 21395 CR 7 Saturday evening.

One main concern of the firefighters was keeping the fire away from a residential home to the east of the buildings.

“There is a residence on the other side of the pine tree line (at the east of the property). I had a pretty big operation going there to protect that structure due to the way the fire had taken over the structures. It had actually hopped … and was pushing through to the east and was going to threaten that residential structure,” Price said. “So the efforts were to hold that line which we were able to do, miraculously.”

A fire line is a way of getting all flammable materials back from the path of the fire and in this case, keeping them away from the pine trees, he said.

He added, “It never breached that pine tree line, we were able to hold that line. Later, thanks to the use of B R equipment, we were able to push and make that line wider and push the chunked wood and broken pallets back more and create a nice fire line.”

Price said they had two command posts set up, one on the western side of the property and one on the east, keeping the fire away from the neighboring residential building. Price said the fire departments drew water from the village of Vanlue as well as local ponds along CR 330 and CR 7 and he had a water shuttle officer communicating with him and directing tankers where they needed to go.

“The plan assists us in getting fire apparatus’ and other needs. When I enacted that it gave me some relief and I was able to allow some of the local departments that had been there since the time of the call to be able to break down and go get some rest,” he said.

Price said Findlay Fire Department Chief Josh Eberle assisted with enacting the plan and made the phone calls to get the apparatus and manpower needed to relieve the initial crews called in.

Price said the fire mostly was contained and he began relieving some of the departments around 3 a.m. Saturday.

While an official count of departments at the scene will not be available for a couple of days, Price said departments from Seneca, Wyandot and Hancock counties were present, and six more crews came to the scene out of the response plan. He said even more crews from Hancock County provided aid Saturday that were not at the fire Friday. Brian Young, Liberty Township Fire Department assistant chief, said departments from Fulton County and Putnam County also were there over night.

Price said the State Fire Marshal’s Office arrived at the scene Saturday morning and still are investigating the fire. It still is unknown how the fire started and a loss estimate was not available.

Bryan Ruehle said the first building to catch fire had pallet disassembly equipment in it, the second building contained re-manufacturing equipment and the last building was for repairing pallets. He said the re-manufacturing of pallets is most of their business. From what they could tell from the cameras, Ruehle said the fire appeared to start on the west side of the disassembly building on the southwestern side of the property.

Ruehle said each building was filled with large equipment, pallet materials and stacks of pallets. He also said they lost two pieces of mobile equipment, a forklift and a skid steer. Additionally, automated stackers, miscellaneous equipment and tools and thousands of pallets were lost to the fire, Ruehle said.

“This is the biggest loss we have ever had,” Ruehle said. “It’s just a complete and total loss.”

Ruehle said Vice President Dwayne Hoschar, his dad and himself spent most of the day helping to clean up and a few employees and friends also did whatever they could to help.

Ruehle said plastic pallets likely caused the majority of the black smoke. He said the business also supplies mulch and luckily, none of the mulch caught fire.

Price also said one transformer blew and the electric leading to the property still was shut off as of Saturday evening.

Firefighter C.J. Couch said in his eight years with the department, this was the biggest fire he had been to other than a train derailment that happened in Washington Township a few years ago.

“It was nice having so much help and support,” Couch said. “There were a lot of departments here that we had never worked with before and yet, we all worked together quite well. It was just a great effort by everybody involved.”

Price said he was grateful for all the help.

“We’re very thankful for all the help we’ve received. The American Red Cross was here and we received numerous donations from people who just stopped and dropped off water. I’m truly grateful and thankful for all the efforts,” Price said. “Also, I just can’t say enough about the mutual aid response. This was a larger fire and was more than just one department could ever handle. We could not have done this without them.”

While there will be hot spots for some time, they are contained, he said. Price began releasing departments around 5:40 p.m. Saturday that still were there for relief, and while he could not definitively say how long Vanlue Fire Department would standby at the location, he said his department had been at the site for 24 hours.