Views from officials, law enforcement and an immigrant 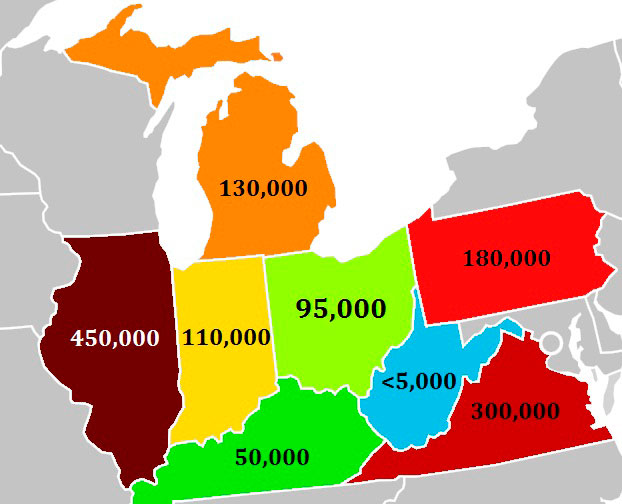 Rhetoric concerning illegal immigration has been in the air as Donald Trump has taken the presidency, which leaves the question of how these policies could affect Seneca County.

Trump has been outspoken about changing the way the U.S. handles immigration, not just to keep out illegal immigrants, but suspected terrorists as well.

Illegal immigration has been a hot topic locally even before Trump took office, as protesters have been known to speak out against those detained by Immigration and Customs Enforcement. In September 2016, The Advertiser-Tribune reported on protesters gathering across the street from a Seneca County Board of Commissioners meeting.

“We’re here to support (Latino grassroots organization) HOLA protesting the jail here in Tiffin that detains immigrant workers,” Baldemar Velasquez, president of the Farm Labor Organizing Committee, said in The Advertiser-Tribune article. “This smacks of business, making money off of the tragedies of these families that are torn apart by unnecessary deportations.” 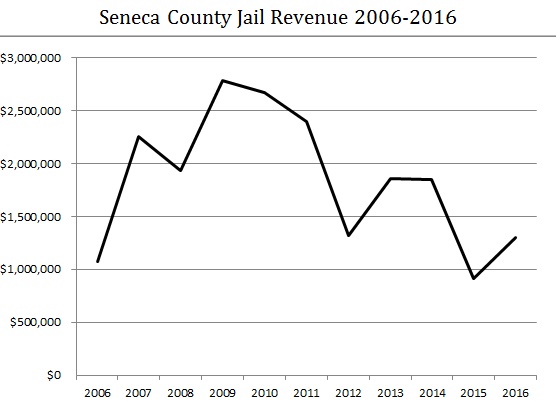 IMAGE BY SETH WEBER This graph shows revenue coming into the Seneca County Jail since 2006. A considerable amount of revenue was lost in 2015 when fewer illegal immigrants were being housed at the jail by Immigration and Custom Enforcement.

Since he took office, Trump has issued executive orders calling for the temporary suspension of immigrants from seven Muslim-majoirty counties “while existing screening and vetting procedures were under review,” states the text of “Executive Order Protecting The Nation From Foreign Terrorist Entry Into the United States.” The order since has been “delayed by litigation.”

This order was discussed by North Central Ohio Conservatives in February, which raised controversy locally. NCOC President Jim Green criticized the pushback against Trump’s immigration orders, saying their criticisms sounded like a “communist manifesto,” and said “lock and load, right? This is why we raffle guns,” fearing violence from protestors.

“Jim Green’s call to arms against peaceful protest is unacceptable,” he said in a February Advertiser-Tribune article. “No citizen should fear violence for simply exercising their constitutional right to speech.”

Problems few and far between

Early in his presidency, Trump signed an executive order calling for the construction of a wall along the U.S.-Mexican border, and, more relevant to Seneca County, “cooperate fully with States and local law enforcement in enacting Federal-State partnerships to enforce Federal immigration priorities.”

“Nothing has changed for us here in Seneca County. A crime is still a crime,” Stevens said. “We’re not going out of our way to look for those things, but we’re not going to not enforce it.”

Illegal immigrants do exist in the county, but problems involving them are few and far between, as can be attested by local law enforcement. Stevens and Chuck Boyer, unit coordinator of Seneca County Drug Task Force — METRICH Enforcement Unit, have said coming across illegal immigrants has become rare.

Boyer deals with many drug dealers locally, and said most of the dealers they catch usually are from the Toledo, Detroit or Chicago areas if they’re not from north central Ohio.

“It’s pretty rare that our unit directly deals with (illegal immigrants),” he said.

“(There’s a) significant decrease in people being deported,” he said.

The significance of the decrease rings true when looking at the federal funds Seneca County was getting from ICE for housing those detained. A report from Seneca County Auditor Julie Adkins stated revenue for Seneca County Jail housing in 2014 stood at $1.8 million. In 2015, when the number of detainees coming into the county decreased, housing revenue dropped to $917,386.

Though Trump’s policies may affect future illegal immigrant arrivals and departures in the U.S., Kerschner said he’s not sure how it could affect Seneca County.

“I think it’s too early to tell what Trump’s policies would do to the volume of detainees,” he said.

Kerschner said Seneca County Sheriff Bill Eckelberry helped the jail make up for revenue lost by the lack of illegal immigrants by bringing in inmates from other counties. Eckelberry declined to comment for the story.

This phenomenon is not new, as Kerschner said there are many programs which can generate “significant income at the whim of the federal government.”

This local trend also can be observed nationally, as arrivals by illegal immigrants began steadily decreasing in 2008, stated a 2014 Journal on Migration and Human Security report by the Center for Migration Studies of New York. Departures, which include adjusting to legal status, removal from the U.S., leaving voluntarily or dying, have conversely decreased.

“From 1982 to 1997, the percent arriving from Mexico was consistently just below 70 percent,” the paper stated. “From 1997 to 2004, the percentage from Mexico dropped gradually, falling to slightly more than half of all arrivals in 2004.”

Carlos Rodriguez, network administrator at St. Francis Senior Ministries, is an immigrant from El Salvador, and has first-hand experiences with the U.S. immigration system.

Rodriguez’s parents were involved in Salvadoran Civil War — a conflict lasting from 1980 to 1992 — and left the country for Mexico when he was 3 years old. He said they continued to be persecuted in Mexico 15 years after leaving El Salvador, so they fled to the U.S.

“It got really bad in El Salvador, so they moved from El Salvador to Mexico,” he said. “When you hear on the news about refugees, that’s how my parents got here,” he said.

St. Francis took his family into its refugee program. The process wasn’t easy, Rodriguez said, as “it took a while and a lot of money.”

The experience was an “adventure” for Rodriguez, who did not know any English when he came to Tiffin at 18. Language was the main challenge for Rodriguez, which was made more difficult by the lack of other Latinos in the area.

Rodriguez described his English education “like going to preschool,” as his learning material was elementary-level. He said children’s movies also helped him get a grasp of the basics of the language.

St. Francis has been known as a refuge for immigrants, and as such, sisters at St. Francis are critical of Trump’s executive orders. On the Tiffin Franciscans’ website, they state their belief that “current U.S. immigration law disregards these rights for millions, many of whom are U.S. citizens …”

Although St. Francis did host refugee families when Rodriguez came, Sister Jacquelyn Doepker said they’ve stopped doing so because they don’t want St. Francis to “be a target for ICE.” When St. Francis was a sanctuary campus, Doepker said, the community was “very friendly and helpful” in helping them with their mission.

Throughout her years of aiding illegal immigrants, Doepker has found many of the immigrant families’ only concern was for their loved ones.

“Every one of them were sending any money at all back to their family,” she said.

Sister Margaret Slowick, director of Cuernavaca Children’s Mission in Mexico, has been working among Mexican families for years, and shares Doepker’s understanding of life for an illegal immigrant. Slowick said “nobody wants to leave their home country,” but she finds people feel the need to leave in order to provide for their families.

“They’re just good people who want to send money to their kids,” she said. “If we poured money into helping people (instead of) pouring money into things like the wall, things would be better.”

As someone who is familiar with immigration into the U.S., Rodriguez does not see the point of building a wall across the border.

“The wall is stupid. It’s a waste of money,” he said. “Security’s there, but people are always able to make it through. If there’s a will, there’s a way.”

There has not been a consensus on how much the wall would cost, but estimates range from $10 billion to $12 billion — an estimate from Trump — to upwards of $60 billion, which U.S. Sen. Claire McCaskill, D- Missouri, who sits on the Committee on Homeland Security and Governmental Affairs, estimated.

“…The DHS budget blueprint for Fiscal Year (FY) 2018 will request approximately $2.6 billion to construct fewer than 75 miles of new border barrier, resulting in a per-mile cost of over $36.6 million per mile,” McCaskill stated in a March 2017 letter to Homeland Security and Governmental Affairs Acting Commissioner Kevin McAleenan. “I am concerned that the per-mile cost derived from information presented in the briefing would result in a total cost of the construction of the border wall of more than $66.9 billion for approximately 1,827 miles of border contemplated for construction.”

Although Trump has been hopeful such a wall could stop people illegally crossing the border, research has found many illegal immigrants in the U.S. never crossed the border illegally; they simply overstay their visas, as can be seen in the Journal on Migration and Human Security report.

“Far less attention and enforcement funding … has been devoted to persons who enter with nonimmigrant (temporary) visas and who overstay their period of admission or otherwise violate the terms of their visas,” the paper stated.

In January 2014, a Congressional Research Service report stated 31-57 percent of illegal immigrants overstayed their visas. The exact percentage is not certain because the report stated the Department of Homeland Security “does not have reliable data on emigration and nonimmigrant departures from the United States.”

Rodriguez may disagree with Trump’s policies, but he said practices such as separating families have been around for a while.

“The reality is, some of these policies have been around for a long time,” he said. “They’re just a little more public now.”

He also noted the anger he’s seen toward illegal immigrants regarding them not paying taxes. However, Rodriguez insisted this could not be further from the truth, as illegal immigrants often pay taxes on their checks through fake Social Security numbers.

“I remember people who, even if they were illegal, they were able to get jobs and they pay taxes on their checks,” he said.

Research agrees with Rodriguez’s statement, as can be seen in an Institute on Taxation and Economic Policy report from February 2016.

“The truth is that undocumented immigrants living in the United States pay billions of dollars each year in state and local taxes,” the report stated.

Journal on Migration and Human Security