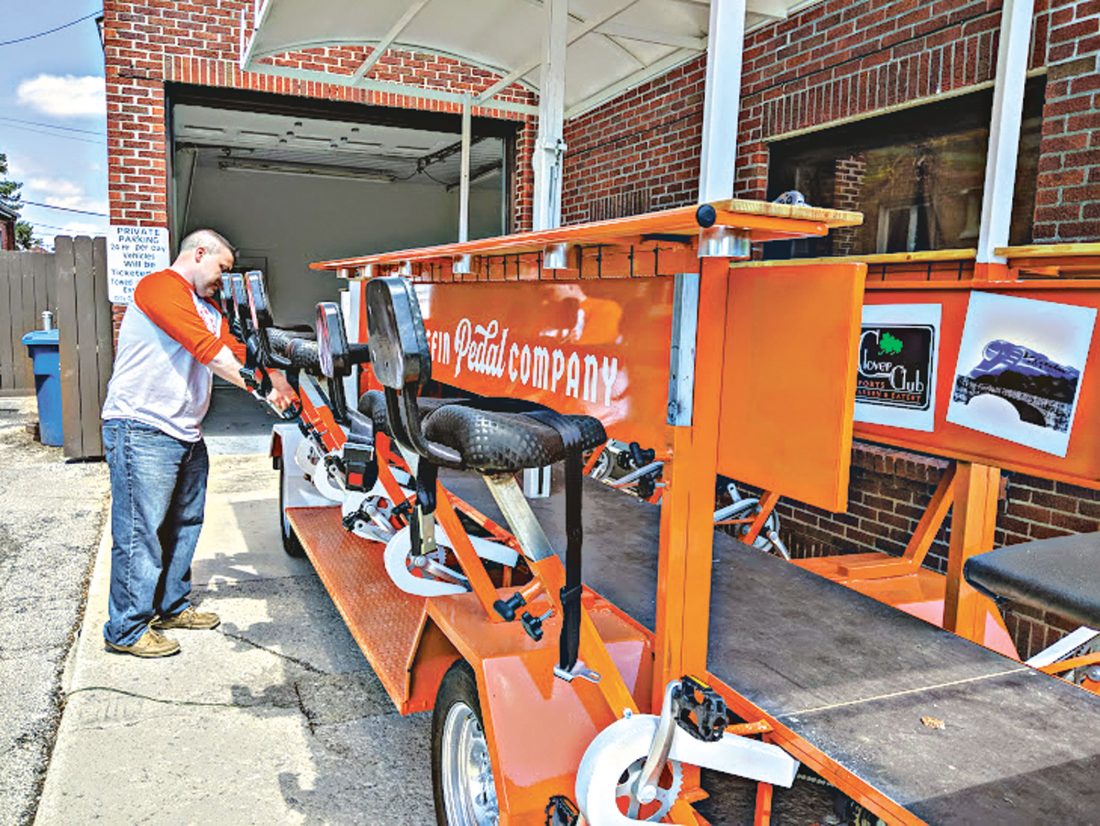 People’s pedal power is key to one of the newest businesses in Tiffin.

Dan Perry’s Tiffin Pedal Co., 145 Madison St., is to kick off its first season Sunday with a block party and open house to take place noon-4 p.m. in conjunction with The Chandelier Community Event Center, 151 S. Washington St., and the grand opening of a new party room on the second floor of Madison Street Tavern, 92 Madison St.

Perry said he got the business idea after he saw a similar “bike” during a visit to Sandusky, and when he returned he jumped into making the business happen in Tiffin.

“I messaged the mayor that night,” he said. “He was all about the idea.”

He said he met with other people in the city “to make sure we were all the same page,” and received support for the project.

“Really, 99% of the feedback I got has all been positive,” he said.

He named the business after the town.

“I definitely wanted to include Tiffin in the name because I love Tiffin,” he said. “Excitement is turning to nervousness the closer we get to launching it.”

The fee is $280 per group rental or $22 per person for individual seats. He said the website booking service also charges a small fee.

Perry said the main route is loop around Washington Street down Jefferson, Monroe and Charlotte streets. The route is mainly on one-way streets so it’ll be easy for vehicles to go around.

The bike is powered by people pedaling while he steers. He or another person can operate a microphone during tours.

The bike has a few non-pedaling seats for young children, older people or others who can’t pedal.

Perry said the minimum age is 13 for pedaling, but everyone must be able to reach the pedals safely.

Clothing is casual and shirts are required. The only other requirement is to wear shoes that are good for pedaling.

Family-friendly tours are to offer a fun ride around downtown and stop at one of Tiffin Pedal Co.’s sponsors — Jolly’s for a root beer or Fort Ball Pizza Palace for a beverage. Other sponsors are Anthony Douglas Kitchen and Bath, Rodgers Flowers, Champs Barbershop, Perry Builders and ReMax. Sponsors get an advertising placard on the bike.

Adult tours are to have stops at sponsors Clover Club, Madison Street Tavern, The Renaissance of Tiffin and Viaduct.

He anticipates Tiffin history tours to begin in June. He said Ben Gillig is working on a tour.

Other ideas have been church group outings, morning tours for retired people, a tour of downtown museums, a bourbon tasting at The Renaissance and a beer tasting at The Laird Arcade Brewery.

“The more businesses I can work with, the better,” Perry said. “I kind of bought the thing because I wanted to do good things with it.”

Perry said he didn’t have much information when he started looking into the idea.

“I went into search mode,” he said. “I needed to find somebody to make a bike.”

He said he talked to companies in various parts of the United States, but didn’t find any companies who could make the vehicle within his price range.

So, he expanded his search and bought a bike from a company in Spain.

Perry said he and his friends already have made modifications to the seats and other parts and he plans to find a U.S. company to make other bikes when it’s time to expand.

He started a Facebook page before he ordered the bike so people could watch the progress.

He said he and family members have placed he decals themselves, and his wife, Katie, has been supportive of the startup venture.

The maiden voyage was a test run to celebrate his stepfather’s 60th birthday April 6.

The first public ride is Sunday evening after the open house, and it’s already reserved.