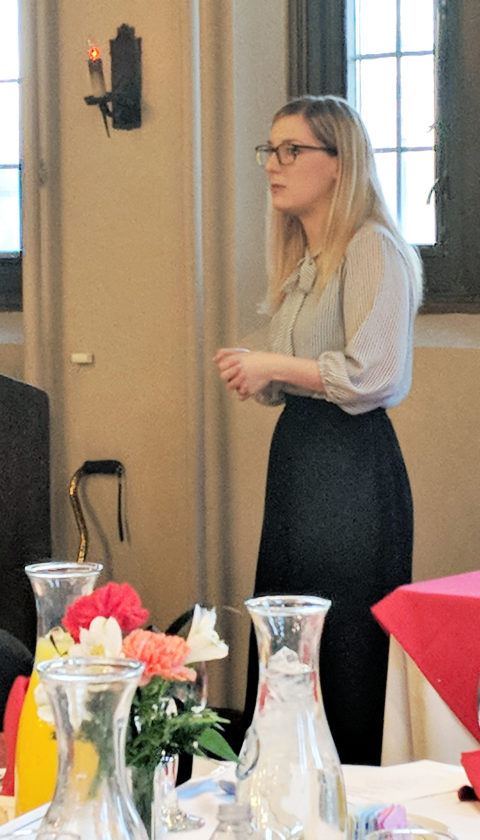 “Women entrepreneurs hold a special place in our hearts and are the bright spot of the local economy and in the community,” said Susan McCafferty, chair of the Patricia Adams Lecture Series Committee.

Dolch is a Tiffin native who went to Kent State University, earning a bachelor’s degree in fashion merchandising with a minor in marketing.

She said she dreamed of opening a unique business. She and her boyfriend, Spenser Blackiston, made their dream come to life by opening their shop, Washington Street Outfitters, at 116 S. Washington St. in the Laird Arcade Building.

“This was a surprise,” Dolch said.

At 24 years old, Dolch said she hopes her success inspires other students who are sitting where she was not too long ago.

Dariano earned a bachelor’s degree in marketing from John Carroll University in 1992 and started a career in sales/management, working for ArtCarved and Marshall Fields in Chicago and Columbus.

Dariano said when she moved back to Tiffin and opened Threads, there were not the “cool little shops Tiffin has now.”

“It was scary and exciting and an awesome adventure,” she said.

Threads is Dariano’s “baby,” she said.

“We had the terrible twos moments and are now making it through the teenage years,” she said. “It is an awesome challenge.”

Dariano said she had to work through changes in fashion and online shopping.

“It is so different and dynamic now,” she said. “We’ve had to find new ways to connect with the customers.”

Those customers have become Dariano’s family, she said.

Clouse-Henry is a 16-year-old Columbian High School student who operates her own T-shirt design business and photography business.

She is president of student council for her sophomore class, participates in volleyball and swimming and works part-time at Behm and Henry Law Offices and Simply Susan’s.

Clouse-Henry said she appreciates her parents helping her achieve her goals.

“I want to thank Heidelberg for acknowledging all that we do, it is really cool,” she said.

Karen Klepper, a 1991 Heidelberg graduate majoring in psychology and accounting, has served on the boards of the Mercy Hospital Foundation, Tiffin-Seneca United Way, Heidelberg Fellows Organization, the NOAH Foundation (No One Alone or Hungry on Christmas Day) and PatchWorks House.

She is working to start a communitywide, collaborative, non-profit called ReClaim It — a resale shop with proceeds used to improve the lives of children by strengthening the systems they depend upon.

These efforts have earned Klepper the Lifetime Achievement Award.

Klepper has partnered with Sentinel Career and Technology Center and students create the space.

“I really appreciate this honor,” she said. “I’m honored for being part of a community with so many compassionate people who are not afraid to step forward.”

ReClaim It is geared toward being a supportive space for young people to turn away from negative choices and a space to reclaim what was theirs.

“I want this project to empower the youth,” she said. “We cannot be the ones to write their stories.”

Klepper said she spent two years interviewing young people in the community who are struggling with their home lives. Through this effort, she decided to create a safe space for them.

“I want them to know they are worthy of something,” she said.

Clouse-Henry has been assisting Klepper with ReClaim It, photographing the project and progress.

“Karen is amazing,” Clouse-Henry said of her fellow winner. “She has done so much for this community.”

No one has gone unaffected by the coronavirus pandemic, but the Seneca County General Health District’s WIC ...

BC board to meet

NEW WASHINGTON — The Buckeye Central Board of Education is to meet at 7 p.m. April 23. The meeting is to take ...