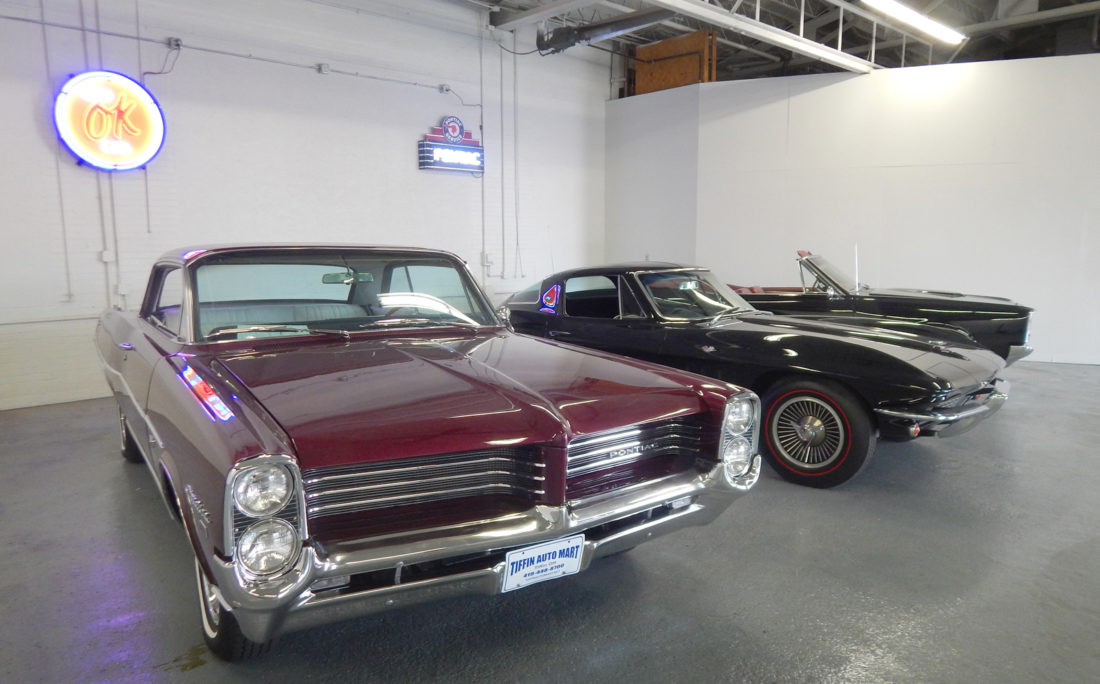 PHOTO BY JACOB GURNEY A 1964 Pontiac Catalina (from left), a 1966 Corvette Stingray and a 1966 Pontiac GTO are for sale and on display in an additional showroom at Tiffin Auto Mart.

Owner Steve Hook said his business opened in June 1995 and was located in front of the Golden Crown restaurant in Tiffin. The business moved to its current location in 2001 and purchased the building that formerly housed Tiffin Deluxe about two years ago, he said.

“I needed some room and this became available,” he said. “I decided to expand my car lot and totally remodeled this building. We expanded from there.”

Hook said they moved into the building Oct.17, 2016, and it has been open for a while, but they’ve been finishing remodeling.

“We totally gutted this place out and remodeled the inside,” he said. “It’s all brand new in here.”

General Manager Tim Johnson said renovations included new ceiling tile, floor and LED lights and there is a room for children to play.

“We wanted to make the business more family-friendly,” he said.

Hook also owns Tiffin Paint and Body, where they do collision and paint work.

“We have buy here, pay here as well as going through credit unions and banks to get our customers really low interest rates,” he said.

Hook said the dealership has first-time buyer programs and offers low rates to those with perfect credit.

Johnson said Tiffin Auto Mart has tripled its business in two years and that growth happened when the business model was changed.

“Our future is very promising,” he said. “We plan on doing more with classic cars and we have plenty of room to grow.”

Hook said the grand opening is to be 11 a.m.-3 p.m. Saturday. It is to be catered by Pioneer Mill and the radio station WCKY-103.7 is to be there. Drawings beginning at 3 p.m. will award a 55-inch Smart Screen TV, Ohio State University football tickets, University of Michigan football tickets and a $100 gift certificate to Tiffin Ace Hardware.