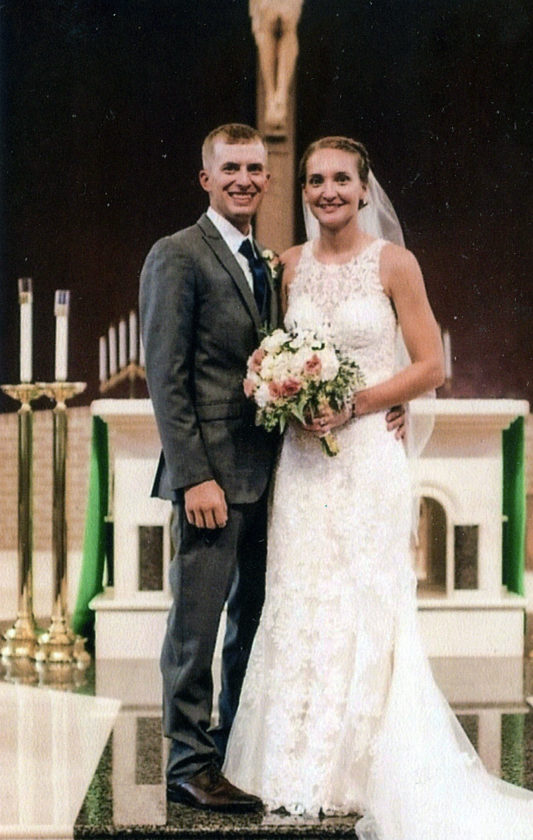 Ashley Miller and Zack Hefner were united in marriage at 2 p.m. Saturday, Aug. 18, 2018, at St. Michael of the Archangel Catholic Church, Findlay. The officiant of the double ring ceremony was the Rev. Kyle Gase. A reception followed at Meadowbrook Ballroom, Bascom.

The bride is the daughter of Linda Miller and Chris and Diana Miller all of Findlay. The groom is the son of Todd and Donna Hefner of Tiffin.

The bride, given in marriage by her mother and father, wore a lace Stella York gown with a high graphic lace neck and plunging sweetheart neckline. The graphic lace pattern continued throughout the gown extending into an open sheer lace back with a scalloped hemline. She carried a nosegay bouquet of peach roses, blue thistles, white anemones, seeded eucalyptus and blue hyrangeas.

The bride is a 2007 graduate of Columbian High School, a 2014 graduate of Bowling Green State University and is an emergency physician assistant in Cincinnati.

The groom is a 2007 graduate of Columbian High School, a 2010 graduate of Owens Technical College and is a project superintendent for Motz Group in Cincinnati.

The couple reside in Cincinnati after returning from their Athens and Costa Navarino, Greece, honeymoon.