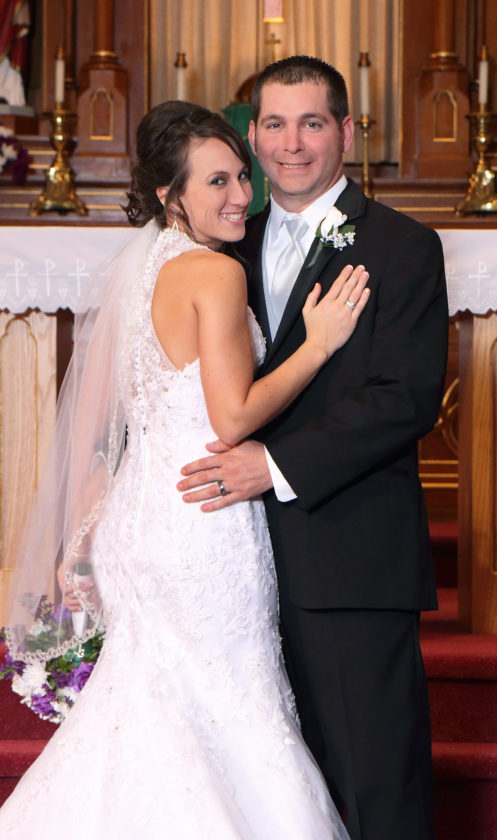 Jenna Mathias and Brian Yost were united in marriage at 1 p.m. Nov. 12, 2016, at St. Nicholas chapel, Frenchtown, during a double-ring Catholic nuptial Mass officiated by the Rev. Ron Schock. A reception followed at the Master’s Building on the Wyandot County Fairgrounds, Upper Sandusky.

Jenna is the daughter of Paul and Nancy Mathias of New Riegel. Brian is the son of Don Yost and Linda Mathias, both of Carey.

Jenna, given in marriage by her father, wore a white lace trumpet gown with a chapel-length train. The gown featured a halter top and racer back accented with rhinestones, glass bugle beads and sequins. She carried a bouquet of white and purple roses, white chrysanthemums and baby’s breath.

Lisa Donelson of McCutchenville was her sister’s matron of honor and Kylie Mathias of New Riegel was her sister’s maid of honor. Bridesmaids included Jennifer Ritzler of Tiffin and Katelyn Puchta of Carey, both friends of the bride. The women wore purple floor-length dresses with lace overlay bodices. They carried bouquets of white and purple roses.

Mark Yost of Carey, brother of the groom, and Brent Simpson of Carey served as best men. Groomsmen included Cody Sherman and Joe Hunter, both of Carey and friends of the groom.

Jenna is a 2007 graduate of New Riegel High School and a 2011 graduate of Heidelberg University. She is a first-grade teacher at Seneca East.

Brian is a 2007 graduate of Carey High School and a 2009 graduate of University of Northwestern Ohio. He is a mechanic at The Shelly Co.

Following a honeymoon trip to Jamaica, the newlyweds reside in Carey. 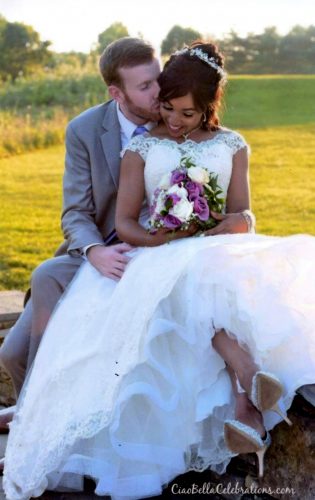