Jo Lynn Messer and Jamie Rhodes exchanged wedding vows at 6 p.m. Aug. 15, 2015, at Rotary Park gazebo in Tiffin. The Rev. Tress Reed was the officiant during the double-ring ceremony.

A reception for family and close friends was at Faith United Methodist Church following the ceremony.

Jo Lynn is the daughter of Nancy and the late George Ferguson of Tiffin. Jamie is the son of James and Janet Rhodes of Tiffin.

The bride, escorted by her son, Evan Messer, wore an off-the-shoulder lace gown accented with beading and rhinestones. Her headpiece was a simple floral headband of pearls and crystals. She carried a nosegay bouquet of white roses, bright pink alstroemeria, light blue mini carnations, baby’s breath and ivy.

The bride’s attendants were lifelong friend of the bride, Angela Melick Adkins of Plain City, as the matron of honor, and Taylor Rhodes, daughter of the groom. Tess and Blake Rhodes, daughter and son of the groom, were the flower girl and ring bearer, respectively. Tony Gooding of Tiffin served as best man and Mark Lang of Fostoria was the groomsman.

The bride, a 1990 graduate of Columbian High School, graduated from Heidelberg College in 1994 with a bachelor’s degree in elementary education and music performance and in 1998 with a master’s degree in education. She is a first-grade teacher at Washington Elementary in Tiffin and is an accomplished harpist.

The groom, a 1991 graduate of Hopewell-Loudon School, graduated from Terra Community College in 1994 with an associate’s degree in electrical/electronics. He is employed at Heinz in Fremont as a lead maintenance mechanic. 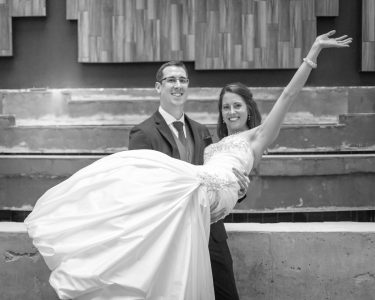