The alternation of generations 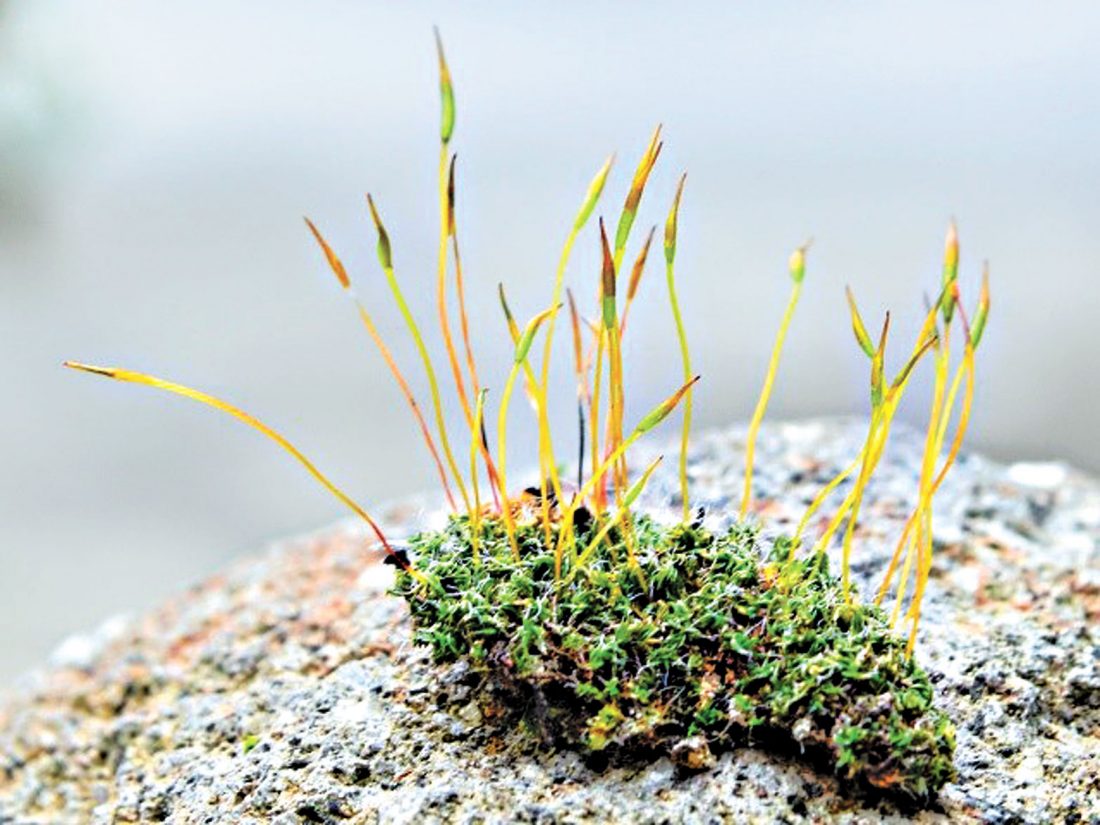 PUBLIC DOMAIN PHOTO A clump of moss with sporophytes growing from the top of (female) gametophytes.

Stepping off the wooded path, Dr. G. repositioned the hood of her slicker to keep at least some of the rain off her glasses. The leafless maples and oaks were doing precious little to block the cold, late March shower but, really, that was all to the good. It was why she was here. “But first, let’s have a look around.”

Since 2002, when emerald ash borers were first discovered near Canton, Michigan, virtually every green, black and white ash in the state had been attacked and most eventually were killed by the beetle’s larvae. This small woodlot was just another of the countless battlefields, and the moldering bodies of dead ashes crisscrossed the forest floor in all directions.

The invasion had quickly spread throughout the eastern states. Such is the insect’s lethality that, in the absence of concerted control measures, it’s generally assumed all ashes in a newly infected area will be dead within 10 years. Funny thing though; the beetle causes so little problem within its natural range in northeastern Asia, that until it reached North America (probably via shipping materials in the 1990s), biologists didn’t know much about it.

“Well, really, it isn’t the beetle’s fault our trees have so little resistance to them or that our predators and parasites are ineffective at controlling their populations. And no one could have guessed, beforehand, they would prove such a problem. What are you going to do, put a halt to all international trade?”

As a plant geneticist, Dr. G. was known for her work on developing strains of grain crops better able to retrieve nutrients from stressed soils – arid, acidified, salty soils and the like. In studying up on the root systems of primitive plants, she had been surprised to learn (or to re-learn from her long-ago undergraduate days) that mosses don’t have roots, only an array of threads called rhizoids whose sole purpose is to anchor the plant to its substrate.

So how do they get their water and nutrients, if not from the soil? Answer: from the air; it’s pretty much every tiny leaf for itself. She was intrigued and for the first time thought to take a closer look at the green mats carpeting many of the forest’s stumps and boulders.

One of the hardest things for students taking their first class in botany to grasp is the “alternation of generations” concept. Plants have a split personality, spending part of their existence as organisms that reproduce sexually (sperm, eggs, fertilization and all that) and the other part of their lives as quite different organisms that reproduce asexually (releasing unfertilized “spores” that grow directly into a new plant).

Sex cells are called gametes in bio-speak, so plants that make sperm or eggs are called gametophytes. Plants that make spores are sporophytes. All land plants alternate from a gametophyte generation to a sporophyte generation and back again. But what makes this tough to visualize is that, for most plants, one or the other generation is so tiny you’d need a good microscope to see it – and the knowledge of where to look.

For example, all the flowers, grass and trees on the front lawn are sporophytes. The spores they produce become either male or female gametophytes. Pollen grains are the resulting male gametophytes (not plant sperm as is commonly believed). So, a single pollen grain is an entire male plant; it only produces sperm when landing on the female part of a flower. Meanwhile, the female gametophyte is a tiny thing buried deep within a flower’s ovary.

But the 2,000 or so species of mosses are unique in that, if you’re lucky (or persistent) enough to be in the right place at the right time, you can readily see both stages on the same organism.

The leafy green plant we think of as moss is the gametophyte generation. Under the right conditions, some of them produce eggs at their tips while others produce sperm. Moss sperm are flagellated and must swim from the male plant to find and fertilize eggs at the top of a female plant. (That’s one of the main reasons mosses grow in damp places.)

Over the course of several months, the fertilized egg grows into a sporophyte plant, right from the top of the female gametophyte. It consists of a long stem-like structure topped by a spore-producing capsule.

Trying to ignore her arthritic knees, the good doctor laid belly down on the sodden litter at the base of a handsome old beech. Focusing the macro lens of her Nikon on an attractive grouping with crystal droplets suspended from half of their sporophyte capsules, she wondered if she might be able to work up a grant to study moss nutrition.

On second thought, no. Maybe she would just keep the moss, the beech and the cold rain for herself.